I had no idea tree stump houses even existed

Courtesy of a link at Free North Carolina, I came across this article.

As the first waves of loggers swept over great portions of the Pacific Northwest’s old-growth forests in the second half of the nineteenth century, those men opened up the dark dense woodlands to settlement. And they surely left their mark on the land. Extracting massive logs that were skidded away by oxen or floated down rivers to sawmills, the best wood was highly prized. Left behind was a scarred landscape, scrap wood, and stumps. Many stumps. Huge stumps. Stumps that still stood a full 10 feet high but were undesirable as lumber because they tended to swell down toward their base, making the wood-grain uneven. 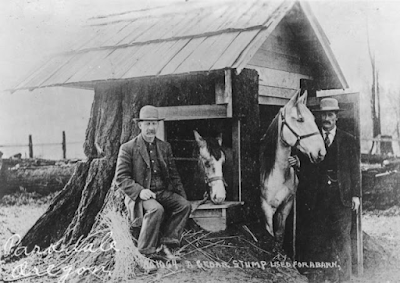 When subsequent waves of pioneer settlers came on through, they found those old logging sites to be welcome clearings that hinted at possible futures as rich farmland. But, being littered with debris, and those towering stumps, these homesteads presented the challenge of years’ worth of hard labor just to clear – by burning and digging-out stumps – enough proper space to plant orchards or raise crops or livestock. 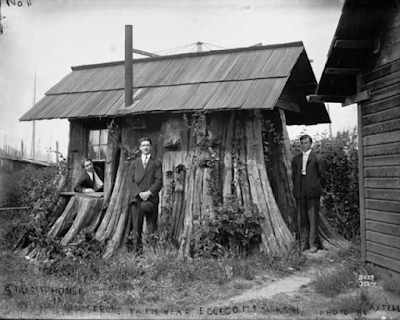 For select stumps would-be farmers found other uses ... By constructing roofs on them, and attaching a door or gate, the stump-based shelters worked fine as storage sheds or chicken houses, or pens to keep pigs and calves safe from prowling predators including raccoons, bobcats, or bears. And sometimes it was people who were the denizens of these stump houses…

I can't help thinking that it must have been more hard work to excavate the interior of those stumps, to convert them into buildings, than it would have been to make mud bricks, or cut planks, or use other materials instead.  I suppose they might have built fires to burn out the inside wood, but how did they keep them under control, and stop them from burning all the way through to the bark?

At any rate, it's a fascinating thought that people used such enormous tree stumps as homes, barns or post offices.  Ingenious!

A lot of times, the trunk was already hollowed out.

Concur with Pete. Many of them literally could have been an above ground room and a basement.

Yes, the hollow stump for an old tree is common, either by disease or fire from lightning. However, you're on point with them being naturally insulated and very strong. All you need to do is construct a roof and maybe a little polishing here and there, and you have a "tiny house".

It took a while to find but a couple of years ago I read an article about Appalachians living in trees: Not Too Long Ago, Families Living in Trees Was Not Too Uncommon

Yep. And early settlers used huge rootballs with all the roots still attached as fences, until such time as they collected enough rocks from plowing to make stone fences.

The term used by the early homesteaders was "stump ranching", from reading family diaries it was brutal work.

Peter, I suspect they were pretty good at burning out the inside without over burning. The American Indians and early mountain men had a lot of luck making dugout canoes (though they were not the preferred method of making canoes, they were certainly widely used).

Keep it tamped so you don't get open flames, and just enough air to keep it going. Just like dugout canoes.