I'm an aviation enthusiast (amongst other things) and now and again I'd like to introduce readers to some of the aircraft that have aroused my interest over the years. Today I'd like to talk about the 'wooden wonder', the De Havilland Mosquito of World War II. 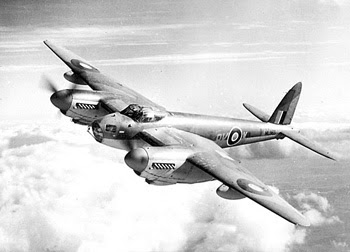 It was a truly remarkable aircraft in its versatility. Over its operational career it served as a fighter, fighter-bomber, maritime strike aircraft, gunship (armed with a 57mm. six-pounder anti-tank gun for shipping strikes), torpedo-carrier, reconnaissance aircraft, specialist target-marking aircraft (used by 617 Squadron, the famous 'Dambusters', among others), night fighter, intruder, specialist bomber (using OBOE, one of the earliest precision-bombing electronic systems), trainer, target tug, and passenger/freight aircraft operated by BOAC on the perilous England-Sweden and England-Portugal routes during the war. (One was used to carry the fugitive Danish physicist Niels Bohr from Stockholm to London in 1943, nearly killing him through oxygen deprivation as he lay in the bomb bay.) In all there were 43 'official' versions and variants. I don't know of any other aircraft in history that performed so many and such varied tasks - all with complete success.

To the initial astonishment of friend and foe alike, the plane was made out of wood: a plywood-and-balsa composite skin on spruce frames. This aroused deep suspicion among senior Royal Air Force (RAF) officers during its development, but it proved completely successful in practice. Strenuous efforts were made by Britain and the USA to secure balsa wood supplies from Peru and Ecuador during World War II - the OSS was involved in this from its foundation. Nowadays we wouldn't think of a particular wood as a strategic material, but things were different then. Almost 8,000 Mosquitoes were built in the UK, Canada and Australia, and some were still operational with the Israeli Air Force in the 1956 Suez crisis.

The Mosquito used two Rolls-Royce Merlin engines (the same powerplant used in the Spitfire, Hurricane and P-51 Mustang fighters). It had an extraordinarily high performance for its day, exceeding 400 mph in later models, and was very difficult to catch. The Germans thought so highly of the Mosquito that they reportedly credited their pilots with two kills if they succeeded in shooting one down. Indeed, it so impressed them that they tried to develop their own 'plywood wonder', the Focke-Wulf Ta 154 (without much success). As late as 1950 the Mosquito remained the fastest bomber in the RAF.

The Mosquito roused the ire of Hermann Goering by disrupting his speech at a parade in Berlin in 1943 commemorating the tenth anniversary of the Nazi Party's rise to power. Three Mosquitoes attacked Berlin's main broadcasting station and shut it down during his speech. Afterwards he famously commented: "In 1940 I could at least fly as far as Glasgow in most of my aircraft, but not now! It makes me furious when I see the Mosquito. I turn green and yellow with envy. The British, who can afford aluminium better than we can, knock together a beautiful wooden aircraft that every piano factory over there is building, and they give it a speed which they have now increased yet again. What do you make of that?"

The Mosquito carried out three of the most remarkable precision strike missions of World War II: the raid on Amiens Prison in February 1944 to free Resistance members and political prisoners (known as Operation Jericho); the strike on the Gestapo records center in The Hague, Netherlands in April 1944; and the bombing of Gestapo headquarters in Copenhagen, Denmark, in March 1945.

There are today no Mosquitoes in flyable condition. Fortunately, there are several good videos of them, including some of the last remaining example before it was tragically destroyed. I've linked a particularly good one at the foot of this entry. YouTube hosts a number of others:

Departure from Strathallan, Scotland, of a restored example in 1984 (superb recording of the engine noise!);

The tragic crash of the sole surviving airworthy Mosquito in 1996, killing both crew.

(based on the novel by Frederick E. Smith, now out of print in the USA but available in the UK), showing many sequences of the Mosquito in flight. (Fortunately there were still enough Mosquitoes in flyable condition at that time to make it!) It's a good war film, now available on DVD and highly recommended for aviation buffs. Another film, Mosquito Squadron

, was made in 1970 but 'recycled' many of the sequences from the earlier film and isn't as well regarded.

There you have it. An extraordinary aircraft that made a very significant contribution to victory in World War II.

Thanks for a great piece on the Mozzie! IMO, the only aircraft that could match it for versatility and effectiveness was the Junkers Ju 88. What do other readers think?

Another movie in which the 'Skeeter played a supporting role was "The Purple Plain," a 1954 release starring Gregory Peck as RAF Squadron Leader Bill Forrester in WWII Burma. At one point, S/L Forrester is visiting with the missionary lady, Mrs. McNab, sho asks what type aeroplanes he flies. He replies, "Mosquitoes," and she says, "Oh yes. Wicked little aircraft."
JPG

At this point, I really don't know any more about one that the other... Mosquito vs. Ju88. What I *have* heard is they were tough planes, either physically, or just tough to beat performancewise. Either way, too bad there's few or none left flying and I could say that about several U.S. planes as well.

They were great planes, but unfortunately the Aerolite glue they were assembled with gives up the ghost after 20 to 30 years.

Lots of boatbuilders used Aerolite after WWII until it's short life span was discovered the hard way.

The Mosquito was also the platform for the Joan-Elanor radio system used by OSS and SOE operatives in Europe. Info on the system and other SOE/OSS sets is at:
http://www.militaryradio.com/
spyradio/joaneleanor.html
I think Duxford Museum in England has a Mosquito as well as Lysander but I can't remember the condition of the Mosquito.

If you ever get to England, check out the deHavilland Heritage Museum at London Colney, Herts. There is a preserved Mosquito on display there. "Mossie" as the museum is affectionately known was the site of the 50th Anniversary Celebration of the first flight of the DH-106 Comet Jet prototype in July 1999. The hangar there was once the DH "skunkworks" where the Mosquito was quietly developed in top secret. Our guest of honor for our celebration was none other than RAF Group Commander John "Catseyes" Cunningham who piloted the Comet prototype for the first time in July 1949. He had flown Beaufighters and Mosquitos in WW2 and was a personal hero of mine since my childhood in the 1960s. Speaking to a small group of us off to the side, John pointed out a field beyond the hangar.

"The Nazis paratrooped a couple spies right out there," John remarked in his quiet, reserved manner. "They were quickly rounded up," he went on, "and dealt with in the usual way."

You could have heard a pin drop between the lot of us. On that day, we had touched history.

There is now a Mosquito flying in the US. It was rebuilt by Avspec in New Zealand.
http://www.warbirdrestoration.co.nz/
https://www.facebook.com/pages/De-Havilland-Mosquito-FB26-Ka114-Appreciation-Page/380660158677093

Here's one rebuilt in New Zealand, flying at Oshkosh in 2019

A new one is being built in England right now.