When the Force becomes the Farce


OK, some people clearly have waaaaay too much time on their hands!

According to a report in the British Daily Mail, it seems that in North Wales brothers Barney and Daniel Jones have established 'the Holyhead chapter of the self-styled Jedi Church, which claims up to 400,000 members worldwide'.

Barney, age 26, is now known as 'Master Jonba Hehol' while his brother Daniel is 'Master Morda Hehol'. Together they are the 'ministers' of the new church. 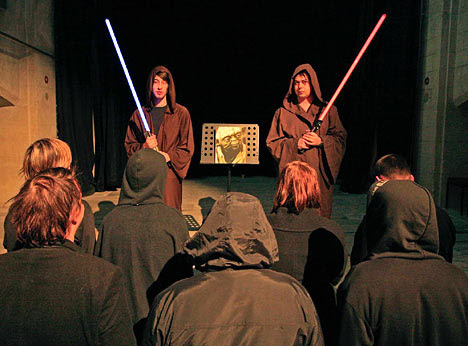 Barney informs us that the group, 80 strong so far, will "have teachings based on Yoda - the 900-year-old grand master - as well as readings, essays submitted, meditation and relaxation, visualisation and discuss healthy eating." He warns, however, that "we have developed on the film's teachings, introducing teachings we believe the Jedi Knights would seek". No word on who decided whether or not the Jedi Knights would actually approve of those unspecified teachings, or on what grounds. In due course, once suitable premises are available, the brothers plan to offer light-saber classes as well.

Let's see now. The UK bans the possession, importation and carry of knives, swords and other such impedimenta. That being so, it's now going to be expected to allow light-sabers? On religious grounds?

Leaving aside the fact that a working light-saber has yet to be invented, if these idiots get away with this I'm going to start the Church of the .45 in Scotland (being of Scots descent myself). Possession of at least one of Saint John Moses Browning's famous products will be mandatory for believers - with, of course, copious supplies of ammunition, magazines, holsters and other bits and pieces.

Perhaps we can arrange a match between the 'Scottish Forty-Fivers' and the 'Welsh Light Saberers'. Guess who'll win?

"Hokey religions and ancient weapons are no match for a good blaster at your side, kid."

Being of Scots and Irish descent myownself, and also having MUCH affection for JMB and the .45, I would be very interested in becoming a member of this Church, BRM.
As you already know, I don't hold much with Organized Religion as it exists today. But this Church...even though you mean it in jest, I could really join. Sister Holly the Hystrionic.

I wanna watch the meeting.

Whisky IS the Water of Life...might I recommend St. Laphroaig be venerated as often as possible?

Ohhhh, yes - Laphroaig will do very nicely, thank you - or The Macallan - or Glenfiddich 25-year-old.

Man! That is screwed up! Came here by way of Ambulance Driver, and I think I might have to blogroll you. Check out my writings and link me if you like them.

"Hokey religions and ancient weapons are no match for a good blaster at your side, kid."

It took me the afternoon and not having thought much of it till now, but isn't that a Han Solo line? It's been so long since I saw Star Wars, I forgot.

That aside, somebody comes after me with any kind of edged weapon, that's what the .45's for. They ain't gettin' that close if I can help it.

Don't bother going to war, just open the Welsh Church of the .45 at the same time as your Scottish church...... you'd have to allow your congregation inside in shifts, and your Arch Armourer would be on permanent overtime.....

I came here via AD as well. Heard about the Jedi Church this morning on the radio. They said, surprisingly enough, that although women are encouraged to join, out of the 80 members of the church, none are women....

And how many of the male members of the church are virgins???

Who knew that a light saber also works as a handy Female Repellent...

I really do hope that there's a clever money scam in there somewhere. Otherwise, these men (scratch that, boys) are just making men look juvenile and silly.

Anyway, so far it seems like a cool blog, gotta start going through the archives. Just as soon as come back from doing donuts in the parking lot in an effort to prove that not all men are juvenile. And to impress the women.