An historical treasure-trove is now online


This is huge, friends. Huge. At least, if you're at all interested in the history of knowledge, how we've come to understand ourselves and our world, and how we're going to tackle the problems currently facing humanity.

The British journal Nature was founded almost 140 years ago. Its first issue appeared on November 4, 1869. In that issue was set out what today we'd call a 'mission statement': First, to place before the general public the grand results of scientific work and scientific discovery; and to urge the claims of science to move to a more general recognition in education and in daily life. Secondly, to aid scientific men themselves, by giving early information of all advances made in any branch of natural knowledge throughout the world . . . 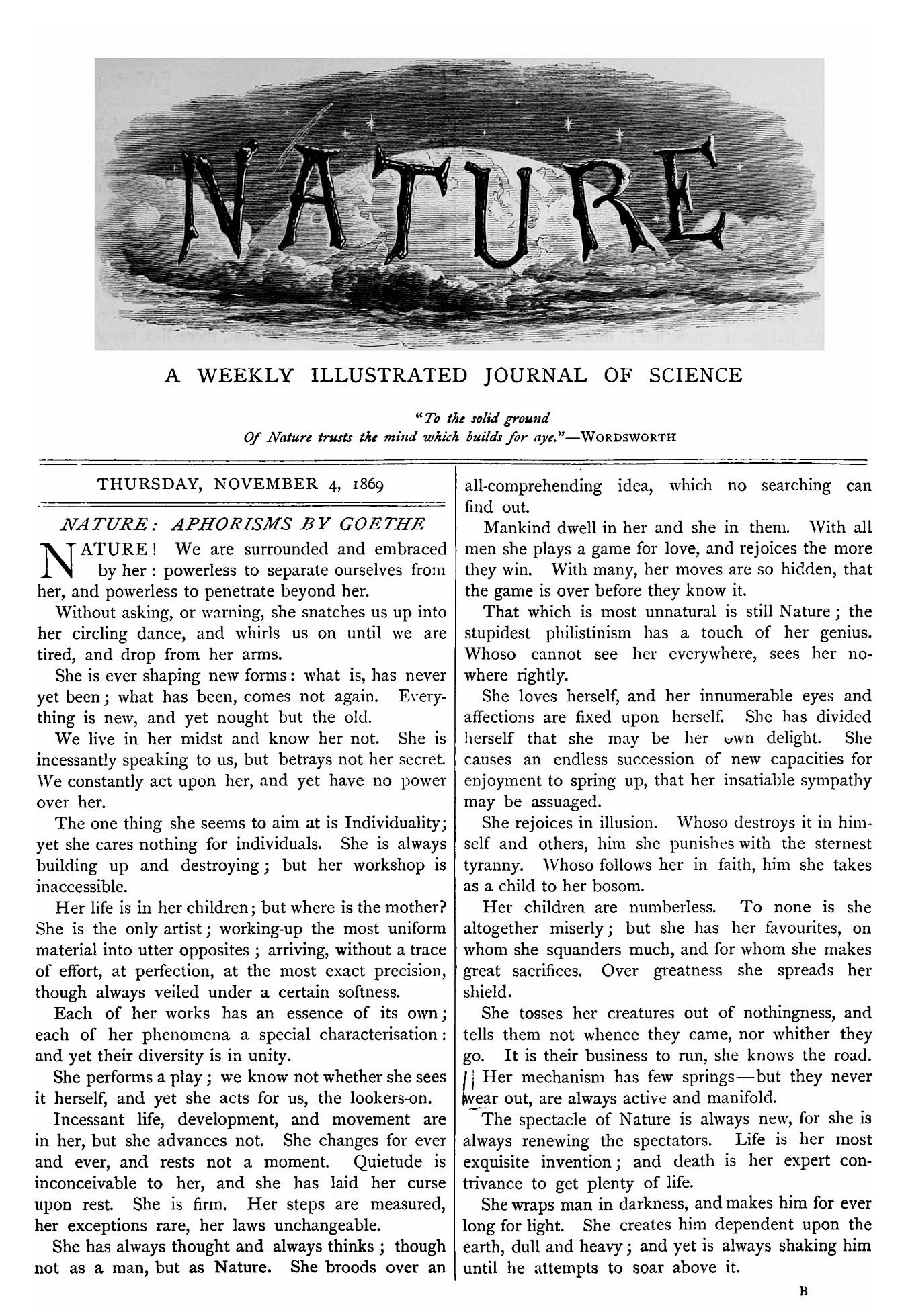 The journal certainly lived up to those purposes. Its pages have carried virtually all the great scientific controversies and discoveries of the times. Darwin's theories; elements in the periodic table as they were discovered; the existence of the neutron; Einstein's theory of relativity; paleoanthropology; nuclear physics; the discovery of the laser; the existence of DNA; nanotechnology; the revelation of the hole in the Earth's ozone layer . . . the list of scholarly articles and revelations is almost endless. Many of the authors of Nature's articles went on to win Nobel prizes and other honors for their achievements.

In its almost 140 years of publication there have been only seven editors of Nature. The first, Norman Lockyear, occupied the 'throne' for half a century, setting a good precedent. Such continuity of leadership has proved very useful in practice.

You'll find all the details at Nature's historical Web site. Highly recommended - but be prepared to lose hours as you absorb some of the finest material in the history of science and discovery. Definitely not for casual Web-surfing. If you're into that sort of thing (as I am) there are more and more such resources on the Web, which is wonderful if you're far from a decent library. Try the online works of Charles Darwin for a start. He's a controversial figure and much of his work has been superseded, but he remains a seminal figure in scientific history.

My personal favorite from the history of Nature? The journal showed its whimsical side by giving a scientific name to the Loch Ness Monster - Nessiteras Rhombopteryx.

(By the way, if you're interested in scientific discovery and how it affects us, may I strongly recommend Al Fin? It's linked in my blogroll sidebar. It's filled with interesting snippets of information and links to more, and is a daily 'must read' for me.)