I'm enjoying the coverage of the soccer World Cup tournament currently under way in South Africa. It's my country of origin, as regular readers will know, so it's nice to see news and photographs of many familiar places.

I'm particularly enjoying the reactions of the foreign press to their first encounter with Africa. As my friend Lawdog, who also grew up in Africa, will confirm: in that continent, things are . . . well . . . different. Civilization is a relatively thin veneer, abandoned at the drop of a hat for more interesting ways of doing things.

The reaction of a couple of Australian sports reporters to their visit to Rustenburg, in the North-West Province, had me cackling with glee.

We're not ones for whingeing [complaining] here at Off The Ball, but as the world's media descended upon a dust field in the middle of nowhere, one would have thought they might not have provided them with a malfunctioning solitary toilet, a more convincingly broken coffee machine and a sandwich bar with no change. Oh the glamour.

It's an interesting drive to Rustenburg as, to be stopped at a 'robot' (that's traffic light to you and me) means being swamped by street corner salesmen selling flags, vuvuzelas and, on one occasion, a fine variety of stockwhips.

Leaving Rustenburg is more traumatic. It seems the roads go in both directions here, on both sides of the strip. The general rule is 'do-as-you-please', which everyone does for the first minute and then can do absolutely nothing for the next hour. The locals, who have managed to get their hands on a uniform, then wave buses and cars in as many directions as possible to ensure no one is under any doubt that this is not Germany.

I know Rustenburg, having visited there several times, and it sounds like not much has changed since I left South Africa more than a decade ago - although the new soccer stadium in Rustenburg, and others like it built for the World Cup tournament, certainly look impressive. 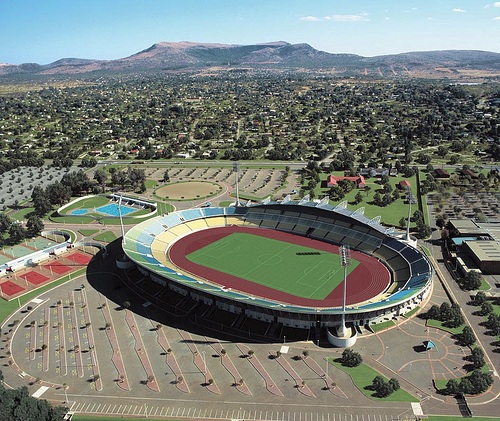 I hope it'll see sufficient use after the World Cup to justify the millions spent on building it . . .