Today's award is shared between the National Pork Board and their legal representatives, Messrs. Faegre & Benson LLP. ThinkGeek gleefully informs us that those parties have sent them what they term 'Officially Our Best-Ever Cease And Desist'.

Recently we got the best-ever cease and desist letter. We're no stranger to the genre, so what could possibly make this one stand out from the rest?

First, it's 12 pages long and very well-researched (except on one point); it even includes screengrabs of the offending item from our site. And we know they're not messing around because they invested in the best and brightest legal minds.

But what makes this cease and desist so very, very special is that it's for a fake product we launched for April Fool's day.

... it was the Canned Unicorn Meat. 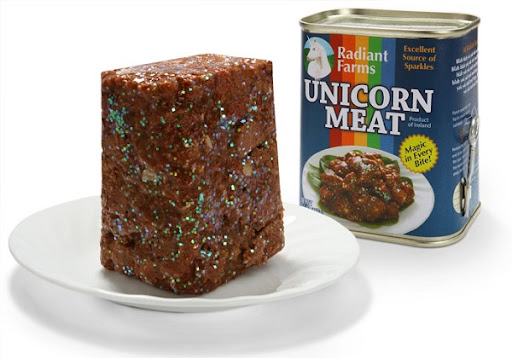 The very special but also very real letter is from the National Pork Board, who claims we're infringing on the slogan "The Other White Meat," a slogan they're apparently thinking about phasing out anyways.

Luckily, the Sisters at Radiant Farms, where the unicorns are nursed through old age before being slaughtered, canned, and brought to market at ThinkGeek, have nothing to worry about--this kind of use is protected as a parody. (We're hoping the NPB doesn't tell the Sisters that unicorns don't actually exist; it'd break their little sparkly hearts.)

We'd like to publicly apologize to the NPB for the confusion over unicorn and pork--and for their awkward extended pause on the phone after we had explained our unicorn meat doesn't actually exist. From our press release:

"It was never our intention to cause a national crisis and misguide American citizens regarding the differences between the pig and the unicorn," said Scott Kauffman, President and CEO of Geeknet. "In fact, ThinkGeek's canned unicorn meat is sparkly, a bit red, and not approved by any government entity."

Finally, thanks, National Pork Board, for giving us yet another reason to keep the April Fool's Day tradition alive. We'll always wonder if our Canned Unicorn Meat played some small, magical part in your rethinking of your brand.

There's more at the link, including a scanned page from the 'cease and desist' letter. Toooo funny!

I would dearly love to know who it was, whether at the National Pork Board or at Faegre & Benson, who read the ThinkGeek article and actually thought that unicorn meat really was being commercially marketed. Whoever he or she may be, I think there's going to be serious competition between Disney and Dreamworks to recruit him or her to write the script for their next fantasy movie!

Ahhh! But think of the articling law students racking up all the billable hours needed to produce a 12-page letter.

Between the pork and the egg on their face, they're halfway to a meal of Chinese!

It's all about "due diligence" and billing hours to the client, isn't it?