I'm delighted to read about the bravery and presence of mind of Mr. Ramon Castillo of Houston, Texas. He and his wife were in their jewelry store when three men attempted to rob them at gunpoint. One threatened Mrs. Eva Castillo with a firearm and tried to force her into a back room. Mr. Castillo drew his own weapon, killed the criminal threatening his wife, and then fought his way to a shotgun he kept behind the counter, exchanging fire with the other two criminals (fire that critically injured him). Despite his wounds, he retrieved the shotgun and killed the other two assailants as well. 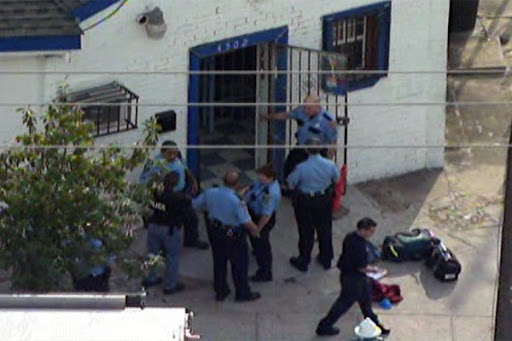 The scene of the crime (picture courtesy of KHOU.com, Houston)

One wishes that such incidents wouldn't take place, of course: but if they're going to happen, the best possible result to deter future incidents of this kind is for the criminals to end up dead at the scene of their crime. Mr. Castillo is apparently expected to survive his injuries; he's surely a hero to his wife, and definitely to his neighbors and friends; and the associates of the three deceased criminals have been reminded of the consequences of their late friends' bad choices. (A fourth criminal, the getaway driver, is being sought by Houston police. I daresay he's learned too!)

Congratulations to Mr. Castillo: and thank you, Sir, for setting an example of courage and presence of mind for the rest of us.