I've pointed out the many flaws and (particularly financial) failings of the F-35 Lightning II strike aircraft on several occasions, most recently in April this year.  Now Winslow Wheeler, a long-standing critic of the program, has come up with a devastating analysis of its costs.  Here's an excerpt.

The cost of the program has almost doubled over the original baseline ... 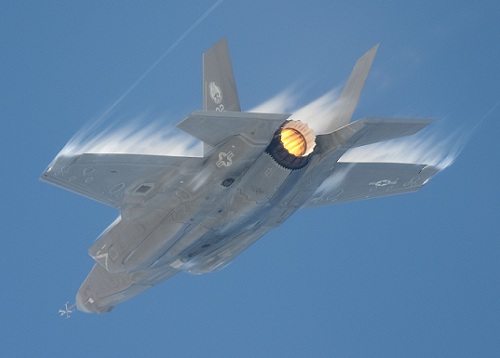 ... comparing the F-35 to the F-16 is a major error; associating those two aircraft is simply implausible. The two have very, very little in common.  While they both are single engine aircraft that were planned to cost less than their contemporary higher cost complements (the F-15 and the F-22 respectively), the basic similarity stops there. The F-16 was conceived as a visual-range air to air fighter in the 1970s; it is a far, far more simple design, and it met its inherent affordability goal. The F-35A is a multi-role, multi-service design with stealth and many other highly complex (so-called “5th Generation”) attributes added in. It is a far, far more intricate aircraft and, as a result, failed to meet any affordability goal.

The F-35A has much more in common with its Lockheed stablemate, the F-22 ... To better predict unknown F-35 costs, we should start with known F-22 operating costs.

The F-35 should now be officially called “unaffordable and simply unacceptable.” All that is lacking is a management that will accept — and act — on that finding.

I fully support and endorse Mr. Winslow's perspective.  I fear the F-35 program has degenerated into nothing more or less than a monumental boondoggle, channeling hundreds of billions of dollars of taxpayers' money into the constituencies of Representatives and Senators who've allowed its costs to balloon to horrific proportions as a result.  It's simply no longer affordable.  Even if it were, the ongoing problems with its testing and evaluation suggest it'll no longer be adequate for the combat environment it will face by the time it reaches full operational capability.

I think it's high time the entire F-35 program was scrapped.  I realize there's no alternative on the horizon, so it may be militarily undesirable to scrap it;  but I submit it'll never be bought in the numbers desired by the USAF, USN and USMC anyway.  I doubt very much if it'll be bought in even half those numbers.  It's simply too costly.


We can no longer afford this bottomless money pit.  It's time to kill it before it drags the rest of the defense budget down with it.

Um, were you refering to an aircraft, or the current POTUS?

I may be showing my naivete here, but, why oh why can't we reverse engineer an existing aircraft frame (say, the F-18, for example) built brand new from the ground up--new frame, new skin, new electronics-- to fit the needed roles.

I mean, we know it'll fly, we know what they cost to operate and repair, and the hard work of the design phase is essentially done.

Am I missing something obvious (other than sweetheart deals and kickback-contracts)?

Are we so locking into the idea that it has to be something new that we scrap a working versatile aircraft frame?

Hmm. In 1979, the chairman of Martin Marietta, Norman Augustine, published "Augustine's Laws", a collection based on his years in defense contractors. He said that sometime in the next decade or so, fighters would be so expensive, the military budget would buy one. The Navy and Marines would each fly it one day a week, the Air Force would fly it one day a week, and the other four days would be required maintenance.

I have to echo Shrimp here. I've never quite understood why we can't keep making and using existing models and frames. I get that technology marches forward, and that sometimes old frames might not be able to handle the latest and greatest, but it never made sense to me that we have to build and buy the latest and greatest because our current fleet of F-whatevers are getting too old. If they're too old, buy some new ones.

As to the comments about reworking and existing aircraft...say the F-18. Do you really want to reuse 40 year old aerodynamics? And has anyone heard of stealth? The only reason we can get away with buying so few aircraft is precisions weapons and stealth. I'm not saying there aren't problems and misuse of funds and etc...but really guys...use your heads time and technology march on and reusing a 40 year old design is really putting you head in the sand.
Snoopy

The current designs seem to be working just fine for us now don't they? As to 40 year old aerodynamics, last I checked, the laws of physics don't change annually. But of course technology and time march on, but that doesn't change the fact that on the one side of the equation we have aircraft that we're using now, that are serving our needs just fine, and on the other side we have a new aircraft in an unproven design, way over budget, way over time and from what I understand, way under featured from the original design specs. It seems to me there has to be a better way of going about this, and I have to imagine you can improve on an existing design easier than you can build from scratch.

Did you miss this part?

I am well aware that technology changes. I also know how Low-Observability Technology (stealth) works, and how it does not. Do you? Can you tell me the difference between re-entrant triangles and RAM, and how they are both the same principle of LOT? Can you tell me how multistatic radar can still easily defeat either of the above mentioned LOT?

My point is (and was, and ever shall remain) that we have an existing aircraft. The design is almost 40 yrs old. The individual aircraft, in some cases, are 40 years old. That proves that the aircraft and the design are airworthy, have longevity and that they work.

So, let's take something that we know that works, and apply changes around that working design. Nowhere in my original post did I suggest that we take 40 year old frames and re-service them to make new aircraft, nor did I suggest ignoring current (or future) technology. Those frames are old and worn and prone to fail at some point, sooner or later. But we can make brand new frames (based on that 40 year old design) and make entirely new aircraft.

Rather than having my head in the sand, I'm thinking outside the box. What if we take an existing design and apply LOT (stealth technology) to it, rather than build a whole new aircraft from the ground up, saving us the flight trials and design time.

Gentlemen,
keep in mind that the navy scrapped the F-14 for the reason that it took 50 manhours maintenance for each flight hour. And replaced it with the f-18, a lower performance aircraft. Granted, the F-18 carries bombs, but they never really made any effort to do that to the Tomcat.

You want to get good, affordable, aircraft out of our current builders? Tell them we are going to buy Migs, or other foreign aircraft, if they can't get their thumb out. And that they can turn to making cookware, if not.

Frankly, I suspect part of the problem today is all the consolidation that has gone on in the aircraft field since WWII. This is guaranteed to kill innovation in design, as an engineer doesn't dare rock the boat with new ideas, due to internal politics in a company. And, if you have an idea, there is no place else to take it. And once they start on a project, there is no way to kill it.

See ADM Greenert's USNI article at http://www.usni.org/magazines/proceedings/2012-07/payloads-over-platforms-charting-new-course - it appears that he is giving the F-35 a thumb's down.

Sadly there are many reasons why one has to keep bringing out new designs. First, discounting airframe age (cause we assume you can keep production lines running), generally there is a large increase in weight over time due to more systems being added, new weapons, and just general weight creep. You can counteract this by giving better engines, but there is a limit based on the old aircraft's geometry. Bigger engines use more fuel, so conformal tanks are added to even things out. But now the plane is a lot heavier and had a much worse wing loading. Handling, control balance, everything's just a bit worse. You can fix this by new, larger wings with rebalanced control surfaces, but now you have a new plane. And it's not even stealth. The number one rule for stealth is the shape, rather than materials, so any attempts to increase stealth significantly will need major redesign. The superhornet is a good example of all of this, and the Frankenmirrages article is an excellent example of how complex and costly the process is. In summary, new planes are a must, but the F-35 was clearly mismanaged.

As for dropping it entirely, you do that and Australia suddenly gets 76 extra Rhinos. That's a massive drop in capability, no matter how much the F-35 costs. Too bad we got Hornets instead of Eagles back in the day.