A hero who defied conventional standards of courage


Now and again one comes across a hero whose courage is of such an extraordinary order that he towers above others - although he'll usually be the first to deprecate his own achievements and point to others as better examples.  Several examples come to mind:  Charles Upham, Irena Sendler, Eugene Fluckey, Bill Millin, Violette Szabo, John Basilone and many more.

One such hero has just left us.  The Telegraph reports:

Count Robert de La Rochefoucauld, who has died aged 88, escaped from Occupied France to join the Special Operations Executive (SOE); parachuted back on sabotage missions, he twice faced execution, only to escape on both occasions, once dressed as a Nazi guard. 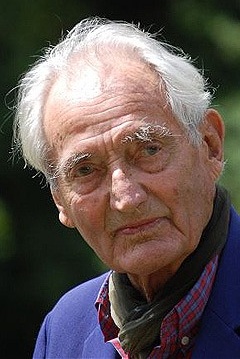 La Rochefoucauld [then only 19 years old] made contact with the Resistance in the spring of 1942, keen to find a route to join Free French forces in England. He took the pseudonym René Lallier and travelled, via Vichy and Perpignan, to the Pyrenees, where he accompanied two British airmen over the Col de Perthuis into Spain. Immediately arrested, the three spent two months in jail before Major Eric Piquet-Wicks, head of recruiting French nationals for SOE, arrived from the British embassy in Madrid and arranged for the three to be released.

It was at the embassy that La Rochefoucauld was invited to join SOE. “The courage and skill of British agents is without equal,” he recalled the ambassador noting. “It is just that their French accents are appalling.”

After meeting de Gaulle to ask his permission to join British forces (“Do it,” came the reply. “Even allied to the Devil, it’s for La France.”) La Rochefoucauld began his training early in 1943 at RAF Ringway, near Manchester, where he learned to parachute and use small arms and explosives, as well as how to kill a man with the flat of his hand. Experienced safe-crackers were brought out of jail to show the recruits the art of breaking and entering. In June he was considered ready for his first mission.

Dropped into the Morvan with two British agents, including one radio operator, La Rochefoucauld teamed up with a Maquis group near Avallon led by a man who called himself The Pope. After destroying the electrical substation at Avallon, and blowing up railway tracks, La Rochefoucauld was awaiting exfiltration by the RAF when he was denounced and arrested. After a series of interrogations, he was condemned to death.

En route to his execution in Auxerre, La Rochefoucauld made a break, leaping from the back of the truck carrying him to his doom, and dodging the bullets fired by his two guards. Sprinting through the empty streets, he found himself in front of the Gestapo’s headquarters, where a chauffeur was pacing near a limousine bearing the swastika flag. Spotting the key in the ignition, La Rochefoucauld jumped in and roared off, following the Route Nationale past the prison he had left an hour earlier.

He smashed through a roadblock before dumping the car and circling back towards Auxerre on foot under cover of night. He sheltered with an epicier. From Auxerre, friends in the Resistance helped him on to a train for Paris, where he evaded German soldiers hunting him by curling up underneath the sink in the lavatory. “When we arrived in Paris I felt drunk with freedom,” he recalled.

Taking refuge with an aunt and uncle, both of whom had assumed he was dead, La Rochefoucauld spent a month rebuilding his strength before, in February 1944, recontacting SOE, which ordered him to the Calais coast, then on high alert for the expected Allied invasion, to be extracted by submarine. After a successful rendezvous off Berck, La Rochefoucauld enjoyed a convivial evening with the crew, only to find himself obliged to stay on-board for three days while the sub completed a patrol. Those days of confinement, he wrote, were among his “worst of the war”. When the vessel came under depth charge attack, La Rochefoucauld noted later, he had “never been so scared in my life”.

Back in London, however, he found a city celebrating a victory that many assumed was just around the corner. “We were invited to the best houses,” he recalled. “Girls fell into our arms.” By May he was ready to be parachuted back into France, charged with blowing up the vast munitions factory at Saint-Médard near Bordeaux ahead of D-Day.

The mission, code-named “Sun”, saw La Rochefoucauld infiltrate the factory dressed as one of the workers there. Over four days he smuggled in 40 kilos of explosives, concealed in hollowed-out loaves of bread and specially designed shoes. On Thursday May 20, La Rochefoucauld linked the charges and set timers before scaling a wall and pedalling to safety on a bicycle. The blast was heard for miles. After sending a message to London (the reply read simply: “Félicitations”) he enjoyed several good bottles with the local Resistance leader, waking the next day with a hangover.

Cycling to Bordeaux to meet a contact who was to arrange his return to England, however, he ran into a roadblock, taken prisoner, and imprisoned at the 16th-century Fort du Hâ. His explanations that he had been out after dark on a romantic assignation were not believed and, in his cell, La Rochefoucauld considered swallowing the cyanide pill concealed in the heel of his shoe.

Instead he faked an epileptic fit and, when the guard opened the door to his cell, hit him over the head with a table leg before breaking his neck. (“Thank Goodness for that pitilessly efficient training,” he noted). After putting on the German’s uniform, La Rochefoucauld walked into the guardroom and shot the two other German jailers. He then simply walked out of the fort, through the deserted town, and to the address of an underground contact.

Once there, however, he found that joining the rest of his escape line was impossible, as checks and patrols had been stepped up. Then the man harbouring him, whose sister was a nun, suggested that La Rochefoucauld slip into her habit. Thus dressed, he slowly walked through the city, eventually knocking on the door of Roger Landes, code-named Aristide, a bilingual Briton whom he hoped would take care of his return to England. In fact, Aristide’s orders were to hide La Rochefoucauld. D-Day was days away, and he was, by his own admission, “the last of their worries in London”.

He was consigned instead to a woodcutter in the Landes but, bored with the work, joined a local Resistance group. Arrested once more, he was taken to a guardpost only to find himself in a storm of machine-gun fire. It turned out to be coming from fellow resistants, who had launched an immediate operation to free him. He emerged unscathed. “I had what I needed more than anything else,” he said later. “Luck.”


Those were by no means his only exploits.  You can read more about his life at the link.

After 9/11 some Americans were unhappy at the perceived lack of support for this country from France, and began unkindly (and untruthfully) referring to the people of that country as 'cheese eating surrender monkeys' and other epithets in similar vein.  M. de La Rochefoucauld demonstrated conclusively throughout his long and distinguished life that such slanders are anything but appropriate.

May he rest in peace, and may his spectacular example inspire heroes yet unborn.

Labels: Heroism, History, In Memoriam, The Mind Boggles
Email ThisBlogThis!Share to TwitterShare to FacebookShare to Pinterest