While researching something for a book, I came across this interesting story from World War II.

Sgt.-Pilot Sydney Cohen, RAF, who received the surrender of Lampedusa when he made a forced landing on the island, wants to be a sheep farmer in Australia after the war.

Cohen, who is aged 22, is a Londoner. The crew of the warship from which he flew his Walrus Amphibian plane, now calls him the "King of Lampedusa". 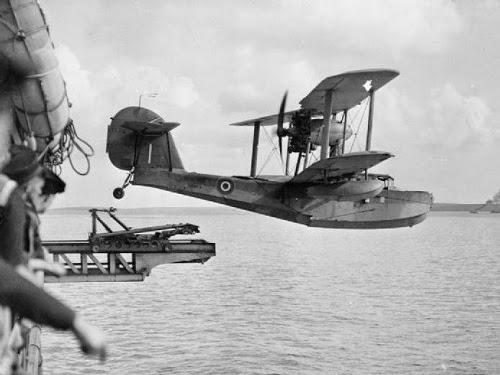 Walrus amphibious aircraft being launched from a cruiser's catapult

Describing his exploit, Cohen said he was not sure when he landed whether the island was Lampedusa because his compass was not working. An Italian officer wearing a large plumed hat, shorts, and high boots led a knot of men waving white' sheets to the plane.

"When I realised they were offering to surrender it was a bit of a shaker," Cohen continued, "but I put on a bold front and asked to see the commandant of the island. I tried to explain that I was not an emissary. They asked me to return to Malta to announce their surrender.

"Then another raid started and I was taken to the commandant in the operations room 75ft below the ground. There the Italians gave me a scrap of paper on which was written their offer to surrender.

"When my plane had been refuelled I took the surrender chit to an American camp in Tunisia. I still have the surrender document. It is a grand souvenir."

The formal surrender of the Island was negotiated by Lieut. Corbett, who went ashore from the destroyer Lookout. Within two minutes of his landing the Italians accepted unconditional surrender and Lieut. Corbett signalled a company of Coldstream Guards in a landing craft to come ashore.

The surrender of Lampedusa took place during Operation Corkscrew, the occupation of Pantellaria and nearby islands prior to the Allied invasion of Sicily in July 1943.  That must have been one of the few occasions - perhaps the only one - when a lone NCO, who was only there 'by accident' in the first place thanks to technical difficulties with his plane, accepted the surrender of an entire garrison!

Kind of brings to mind the many "surrenders" of Iraqi troops during Desert Storm: to helicopters!

Only thing unsurprising is his desire to be a sheep farmer. Damn antipodeans and their animal husbandry.