That's about the size of it


I found this image over at Mike Miles' place (site often NSFW). 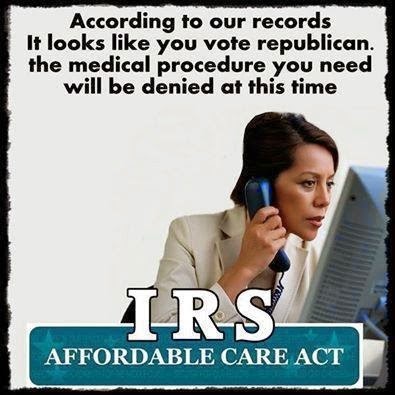 Can anyone doubt that most Americans now view the IRS in this light - as a partisan, biased, politically motivated agency that serves the Democratic Party rather than the nation?

I think this is an opportunity for those who favor the so-called 'flat tax' or 'FairTax' proposals.  Quite apart from the appeal of such ideas in other ways, their simplicity means that the IRS as we know it could simply be disbanded.  There would be no need for so great an army of regulators to wade through the morass of the current tax code, decide what individuals or corporations owe to the state, and enforce its collection.  The process would be greatly simplified - if not to the point that the IRS was no longer needed at all, at least to the point where most of its bureaucrats could be discharged, leaving only a 'rump department' of essential personnel.

I think many Americans will find that prospect eminently desirable in the light of the corruption that's been revealed in that organization.  Do they really expect us to believe that the e-mails of no less than seven people have all been irretrievably lost - even when they had a contract to back up their e-mail servers?  As George Will so memorably put it, "Religions have been founded on less".  Frankly, I don't think they expect us to believe it.  Rather, they don't care whether we believe it or not.  They're going to stick to their story and defy anyone to prove them liars.  They know the present Administration has 'got their backs';  therefore, they're not afraid of any potential consequences.

I wonder how many of the IRS's executives will seek a pre-emptive Presidential pardon prior to President Obama leaving office?  I can think of several people who'd be well advised to do so, lest their current and former misdeeds come back to haunt them under a more honest Administration.  (Of course, that won't help the thousands of honest IRS employees who must bitterly resent being made into political pawns rather than professional personnel.  They're as much victims of this scandal as the rest of us.)

Nor is the IRS the only agency to exhibit such brazen, uninhibited lawlessness.  As Mark Fitzgibbons points out:

Too many government bureaucrats believe that they are not merely above the law, but that they are the law. They are smug because they are beyond the reach of real consequences.

The IRS scandal highlights how bureaucrats violate constitutional and statutory restrictions. The problem has risen to epidemic proportions at the federal level, and has even filtered into state and local bureaucracies.

Given the totality of circumstances and even with America’s presumption of innocence for all, the IRS is objectively on the threshold of obstruction of Congress.

The breadth of what we already know about the IRS scandal highlights the level of law-breaking and contempt for the rule of law within government agencies borne of a long-developing breakdown of government accountability.

Law professor Jonathan Turley describes the larger problem this way: “Our carefully constructed system of checks and balances is being negated by the rise of a fourth branch, an administrative state of sprawling departments and agencies that govern with increasing autonomy and decreasing transparency.”

Courts long ago abdicated proper judicial review over government agency discretion and overreach. Now we have a Justice Department that is ideologically opposed to enforcing the law when government acts illegally.

Congressional oversight can no longer control the scope and depth of the problem. Bureaucracies are so big with so much discretion that elected officials are overwhelmed by the Frankenstein monsters of their own making.

Attempts to limit government agencies through the Regulations from the Executive in Need of Scrutiny (REINS) Act, or closing loopholes in laws such as the Freedom of Information Act are about as effective as peashooters against a Death Star battle station.

Bureaucrats can be smug because they lack consequences. They have no “skin in the game.”

The way to control this epidemic of government law-breaking is to allow citizen victims to sue, and legislate personally liability for bureaucrats guilty of willfully illegal conduct.

Except that there will be NO accountability with this administration... sigh

You forget that congress uses tax laws to pay off their friends.

Taking away the ability to craft a custom tax law to help a specific company (the only one that can meet the very carefully spelled out requirements to apply) would be fought very hard by congresscritters.

However many there are, they are correct, at least in practice. It is in the nature of an unconstrained government that there is no way to "fight City Hall" with a chance of net victory. Even if you win in some court or other, the State will make the experience so time consuming, financially costly, and emotionally draining that you'll wish you'd surrendered at the outset.

Under such conditions, bureaucrats -- especially the sort protected by anonymity and Civil Service rules -- can issue decrees with the force of law and expect them to be obeyed...which they will be. There is no practical difference between such "laws" and the sort emitted by legislatures.

The irs has been an entity to itself for a long time. It is just coincidental that their goals - absolute power and control - dovetail with the dems right now. They have been given such latitude to do whatever they deem 'best' that they are now convinced they have NO accountability to anyone for anything. The only way I can see to rein them in is to abolish them.

Thirty years ago I told a liberal that Universal Health Care would be run just like that.

Made her think, for at least a couple of minutes.

"...the thousands of honest IRS employees..."

I seriously doubt they exist.

All the horror stories I've read or heard of over my last fifty plus years, plus my own direct experience, infers that the culture within the IRS doesn't tolerate honest, upstanding people working there.

I have never seen evidence that would contradict this.

One good thing about this administration slow-walking all this stuff. It's unlikely they will be tried and convicted before Captain Zero is out of office, and he can't pardon someone that hasn't been convicted. The potential political blood-bath that could happen if we get a Republican Senate and President in 2016 investigating these crooks could be enough to float an ark. Of course, being Republicans, they'll likely do something stupid and pass on the chance in the name of comity, of let themselves get bogged down in process, and then let the press make it look all political rather than substantive.
I doubt the FairTax would pass congress for precisely the reason Will said - the Republican abuse it too, just in different ways. I'm sure the people, and most businesses, would LOVE the FairTax.

The federal government escaped its Constitutional corral quite some time ago through the "boiling the frog" method. It's past time to herd it back in.

The fault lies largely with Congress, who have enacted laws with inadequate specificity, and created, or charged, executive branch agencies with responsibility to apply regulations to enforce what agency personnel "believe to be" Congress' intent.

Will (above) is correct - Congress will never agree to anything limiting their power or constraining their ability to stay in power. So, it's up to us.

I'd say "Constitutional Convention" but there are too many Low Information Voters and too much power over them from a very heavily biased media to not view that approach with trepidation.

The ship needs to be turned to a new course before it hits the rocks, because hit the rocks it will.

Once again I'm presented with the false dichotomy of "abolish the IRS".

"There are a thousand hacking at the branches of evil to one who is striking at the root."
-Henry David Thoreau,

Folks...the IRS as an institution isn't the problem. The very concept of an 'Income Tax' is the problem. Eliminate the direct control Fed.Gov has over your life through the fruits of your labor (and all that is attached to and derived from them) and you eliminate the root of the problem.

If the IRS were to be abolished *without* eliminating the 'income tax' (in *any* form), another, possibly more pernicious entity would by necessity spring up to take it's place and fill it's roll.

And please don't go bleating on about 'what would we replace it with?' When a house is on fire and you roll up in a firetruck to put it out, you don't first decide which *other* structure to set on fire to offset the one you are putting out!

Remember...there are other taxes that the IRS as an entity is tasked with collecting...gambling, alcohol, fuel, tobacco, import/export duties, Ect. This whole mindset of we NEED the income tax to run the country' is, in my mind, just a bunch of Pavlovian reactionist response as a result of generational Stockholm Syndrome from decades of leftist propaganda. The 'Income Tax' is not used to run the government...it's sole purpose is to be used as a lever for social engineering.