How embarrassing is this?

An American student had an embarrassing ordeal in southern Germany when he climbed into a giant sculpture of female genitalia and got himself stuck.

Thought to have climbed in for a dare on Friday afternoon, the exchange student got his legs trapped inside a giant marble vagina sculpture, which has stood at the Schnarrenberg Institute for Microbiology and Virology in Tübingen for the past 13 years.

When the man found he could not free himself, fifteen of his friends tried to intervene to pull him out.

When they failed, they called the emergency services. In the end a total of 22 firemen in five fire engines were deployed to help the American out again. 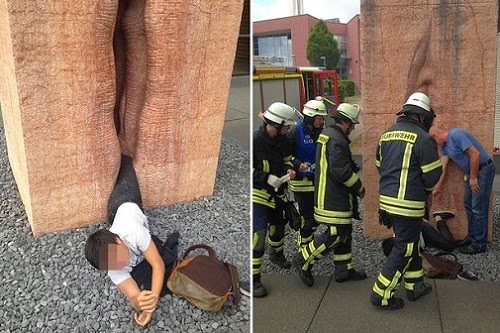 According to the Guardian:

The mayor of Tübingen told the Süddeutsche Zeitung newspaper that he struggled to imagine how the accident could have happened, "even when considering the most extreme adolescent fantasies. To reward such a masterly achievement with the use of 22 firefighters almost pains my soul."

I'd love to know how he's going to explain the photographs to future employers when they research his background as part of the hiring process . . .

I'd say this falls firmly within the category of "dumb stuff we do when we're young, but when I was his age it didn't turn up on the Internet."
Sooner or later, employers will have to stop pretending they never did dumb stuff.
Though, if it really took 22 firefighters to extricate him, as opposed to one to do the work and 21 to point and laugh, perhaps he's exceptionally good at getting into trouble.

Climbed all the way in there... and still hasn't found the G spot.

There are some you can get lost in but not stuck.

There's got to be a "sand in your vagina" joke in there somewhere.

I wonder if he's been accused of rape yet.

There's a release switch at the top but he couldn't find it.