I'm sure many of my readers know the science fiction and fantasy novels of Dave Freer, a fellow former South African who immigrated to Flinders Island in Australia some years ago.  (One of his blogs, Flinders Family Freer, describes life there, including most recently hunting wallabies for meat and electrocuting himself in the process!).

Dave's been a prolific writer, producing some of the funniest SF/fantasy blends I've ever read.  He collaborated with Eric Flint on a number of books for Baen.  Their 'Rats, Bats and Vats' and its sequel 'The Rats, the Bats and the Ugly' have kept me cackling with laughter for many years.  (I hope there's more to come in that series, Dave . . . hint, hint!) 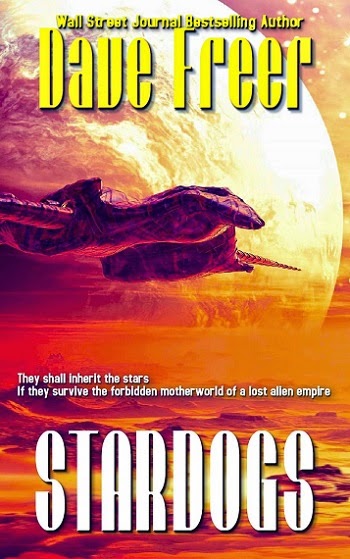 Like many of his books, it's an intriguing blend of SF, fantasy and space opera.  I've had the pleasure of reading a pre-release copy, and thoroughly enjoyed it.  Here's Dave's blurb for the book.

The Interstellar Empire of Man was built on the enslavement of the gentle Stardogs, companions and Theta-space transporters of the vanished Denaari Dominion. But the Stardogs that humans found can't go home to breed, and are slowly dying out.

As the ruthless Empire collapses from its rotten core outward, an Imperial barge is trapped on top of a dying Stardog when an attempted hijacking and assassination go horribly wrong. Trying to save its human cargo, the Stardog flees to the last place anyone expected - the long-lost Denaari motherworld.

Crawling from the crash are the Leaguesmen who control the Stardogs' pilots by fear and force, and plan to assassinate Princess Shari, the criminal Yak gang, who want to kill everyone and take control of a rare Stardog for their own, and an entourage riddled with plots, poisons, and treason. But Shari and her assassin-bodyguard have plans of their own...

Stranded on the Denaari Motherworld, the castaway survivors will have to cooperate to survive. Some will have to die.

And some, if they make it to the Stardogs breeding ground, will have to learn what it means to love.


You can read the first few chapters free at the book's Amazon page, if you're interested.  I encourage you to do so, and to buy the book if they pique your interest.  I think you'll find it an intriguing take on the world of space imagination.

(George Lucas, if you need a new movie inspiration, you could do worse than read this . . . )

As another fan of David Freer's work I've been waiting in anticipation for more. Thanks for the pointer.

Just wondering if he 'borrowed' the idea of the Stardogs from Terry Pratchett's 'Strata', you think?

@Able: I hadn't seen many parallels between 'Stardogs' and 'Strata'. Where do you see them?

Oops! I meant Dark Side of the Sun - with Pratchett's Sundogs - a star-spanning canine-likened creature used to transport items/cargos/people across interstellar distrances (purely as a concept, the storyline seems entirely differant).

Confusion, age creeping up on me again

I think the Sundogs are a very different critter to Dave Freer's Stardogs.

Oh, not implying anything. It's just that, whilst there's quite a few of we Pratchett fans about (over here at least it's quite hard to find anyone who publicly admits to it. I suspect that has to do with the reaction you get when you try to explain your enthusiasm for a red-haired, simian librarian who only says 'Ook' – strange looks, careful backing away and gentle suggestions that you try on a nice white coat with tie at the back sleeves abound. Similar to trying to explain why you enthuse about a story about 'uplifted' bats and shrews in a way), it would have been nice to think David had taken an idea from there and was thus 'one of us'. That and the creative process is utterly beyond me, so ….
Ah well.