Grant Williams' latest newsletter has a fascinating (and deeply worrying) article about the pent-up effects of quantitative easing on both present deflationary tendencies and possible future hyperinflation.  Money quote (you should pardon the expression):

Essentially, the central bank heads all around the globe are engaged in a must-win confidence game. They HAVE to make people believe that everything is under control and getting better, BUT at the same time they must ALSO make them believe that the accommodative policies currently in place will be here, essentially, forever (forever in market-time is normally about 18 months to two years).

If the general consensus becomes that they are wrong about either of those statements (or, God forbid, both) then they — and by extension, we — are in for a world of hurt.

On the other hand, if they do manage to convince people they are right and that they will ultimately be successful, then the inflation genie will burst forth from the bottle in which it has been imprisoned as the great credit deflation runs its course; and with the massive amount of kindling heaped on the fire in the shape of QE, the conflagration will be enormous.

But just in case you were still harbouring (yes I put a u in harbouring. I'm English. That's how we roll) a misguided faith in official CPI statistics, check this out: 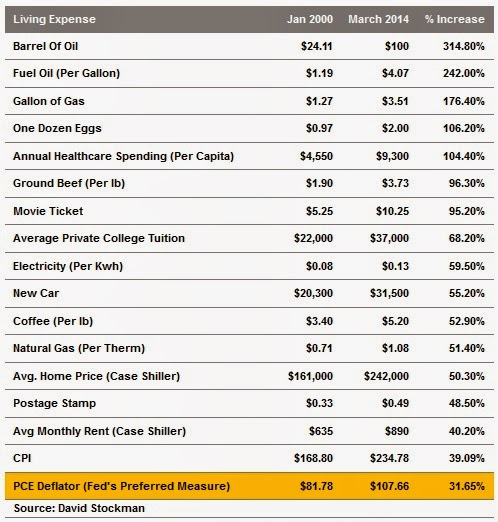 I think this article is a must-read for anyone seriously interested in their economic future.  There's not much most of us can do to prepare for that future apart from paying down debt, building up an emergency fund and stocking up on basic supplies;  but as I've said many times before, trouble is coming.  Personally, I think it's right around the corner.

Of particular concern to me right now is the price of oil.  If Iraq goes to hell in a handbasket, look for it to skyrocket - and such a shock can't be handled by the world's major economies right now.  It's likely to bring down the house of economic cards that the world has built with such attention to fraudulent detail.  That means, of course, that all of us living in that house are going to be exposed if it collapses.

At the very least, friends, keep a few basic foodstuffs in good supply, keep your vehicles fueled and a tank of gas per vehicle stored in gas cans at home (including a fuel stabilizer, of course), and have your personal finances in as good an order as possible - including an emergency supply of cash at home.  I'm going to be double-checking my preparations and adding a little to them over the next day or two.