I was astonished to read that in London, England, 'hundreds' of backhoe excavators, used to dig beneath existing houses to install capacious, opulent basements (sometimes on many levels), have allegedly been simply buried in place rather than go to the trouble of hauling them out of the ground again.  (By the way, such equipment is known in England simply as a 'JCB', after the initials of the company that first made them there - just as we refer to a 'Xerox' when we mean a photocopy.  The name of the company has become synonymous with its product.)

Future archaeologists digging for artefacts in London will blink, baffled, as they try to make sense of the earth-moving machinery buried under a garden in Chelsea. I suspect that even the most canny will never guess the true explanation for such finds: all over the capital’s choicest areas, hundreds of JCB diggers have apparently been buried in their own holes once they have completed their task. Given London’s exorbitant house prices why bother with the expense and hassle of retrieving a used digger worth only £35,000 [about US $59,000] when a new basement will have added hundreds of thousands to your property? 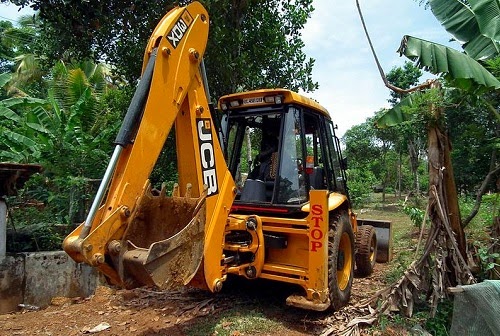 Planning restrictions in posh neighbourhoods such as Chelsea, Belgravia and Notting Hill won’t allow for building upwards. As a house is the average Briton’s number-one asset, home owners are keen to increase their investment by digging as far down as their pockets can afford. They need nerves of steel to carry out their expansion, I should point out. Few things threaten local friendships and networks more than the decision to extend downward. “How far did you go?” was in my teens the question your prying BF asked about your date. Today, it’s asked by neighbours when they see scaffolding go up in front of your house: how far down are you digging?

Though most home owners have calculated how much a basement extension can add to the value of their house, Henry Pryor, the property-finder we always see on television, warned that many people underestimate how expensive mining the ground for more space can prove. But he also admits that “with property prices breaching £10,000 [just under US $17,000] a square foot, the sums add up”. Thanks to countless archived articles and TV programmes, future archaeologists will be familiar with the homeowning neurosis that characterises 21st-century Londoners. As they dig beyond the JCBs to find spacious, cavernous rooms far, far beneath the ground, future scholars will study their contents for a clue to the life led by an elite as exotic and unrepresentative of their fellow citizens as the rich Pompeiians who boasted running water and heating.

I've heard of tunnel boring machines, costing many millions of dollars, being abandoned in place because it would cost more to bore another tunnel to get them out of the ground than it would to leave them there.  Their vast expense is effectively written off as part of the project's capital budget.  However, I've never heard of the same being done with the small excavators used in domestic home expansion!  I'd much rather bring in a crane to haul it out, and recover the almost $60,000 value of the machine (as quoted in the article).

(On the other hand, if you leave it inside the newly constructed or expanded basement, you can at least dig your way out again if anything goes wrong!)

Labels: Boys and their toys, Business and Commerce, Economics, Technology, The Mind Boggles, Weird
Email ThisBlogThis!Share to TwitterShare to FacebookShare to Pinterest

I think the pic is a little misleading. I think these are more like Bobcats than the big machine pictured.

I read a different article that suggested that many of the buried machines were worth more like 5-6k pounds.

The issue is that they dig straight down and can't get the machine back out without a crane and rigging.

THe crane to pull the (much smaller than pictured)tractors from the holes (which cost more like $15-20K NEW)probably costs more than the machine they would be retrieving. Used, these machines can be had for less than $7500.

In other words, a crane to retrieve a (at best) $20K machine will cost $25K for transport, setup, and use, plus takedown and transport back to the yard.

ANd I doubt that they are using brand new machines on these jobs.

But hey, misrepresenting things makes for a much more sensational article.

I am surprised that the environemtal folks allow them to be buried, however.

Honestly, the linked article sounds more typical of the Guardian than the Telegraph. Just sayin'.

They need to get a few drivers like this one:

Haven't looked any farther at story- but off top of my head- being familiar with excavation and particularly the attachemnts used(having built them for several years)--This sounds like a bunch of baloney!
That backhoe(as called in some places- will only excavate down till you can't put the dirt out of the hole. NOTE- The hoe has to be OUT of the hole to dig down. that arm goes DOWN, not UP. The bucket on the front goes up only aprox 10-15 feet maybe- to dump. That is a single basement level. Point being dig down? without a ramp? You aren't going anywhere! Unless there is a Long-reach tracked excavator digging the pit- which again- makes the 'Hoe redundant- why have it in there anyway? Or a bobcat even- I spose to smooth the bottom? The 2nd makes no sense part is "where are they burying it? In the still lower floor? by another 10 foot? I dunno- I may be totally wrong but it seems like a tall tale that residential construction is doing anything so bizarre- except in some extreme case where the construction cost is surely in the mega bucks anyway- because ya know, when you go very deep- water level?? Isn't London kinda low vs sea level(much is-not all) but more importantly- cave-in from dirt much?? I dunno!!
No offense Peter- always enjoy reading all your posts- Sincerely Wish you continued good fortune with your books! Rock On!:)
~Jeryk

There are even abandoned in place multi million dollar tunnel boring machines. Guess it just takes a little number crunching to figure out the options cost.

Another possible reason for not recovering the machine: It's been stolen.
Earth-moving equipment have high theft numbers. I would suspect that a percentage of these were either knowingly bought as "hot", or were stolen to order. Or, of questionable lineage such that the homeowner didn't want to chance trying to recover his investment.

I'm surprised that no enterprising individuals have come up with a business of removing these for homeowners. With the right equipment and knowledge/expertise, a two person team could make a good return on investment.

I like the subtle hint of "they've got TOO MUCH MONEY" that wafts off that article like cat piss under the bed.

Coconut! That comment needs a beverage alert. I barely choked down my coffee before I spewed.