Danger looms in the Middle East


The current crisis in Iraq is but the harbinger of many more fractures along political and social fault lines in the region.  Those who are glibly calling for yet more US intervention in the region have little or no idea what that might imply.  They want to 'put the lid on' the situation, keep things under control.  I have news for them.  There's little or no chance that anyone can succeed in that any more.

Consider the situation in the Middle East right now.  This graphic from the Daily Mail is a good place to start (click it for a larger view). 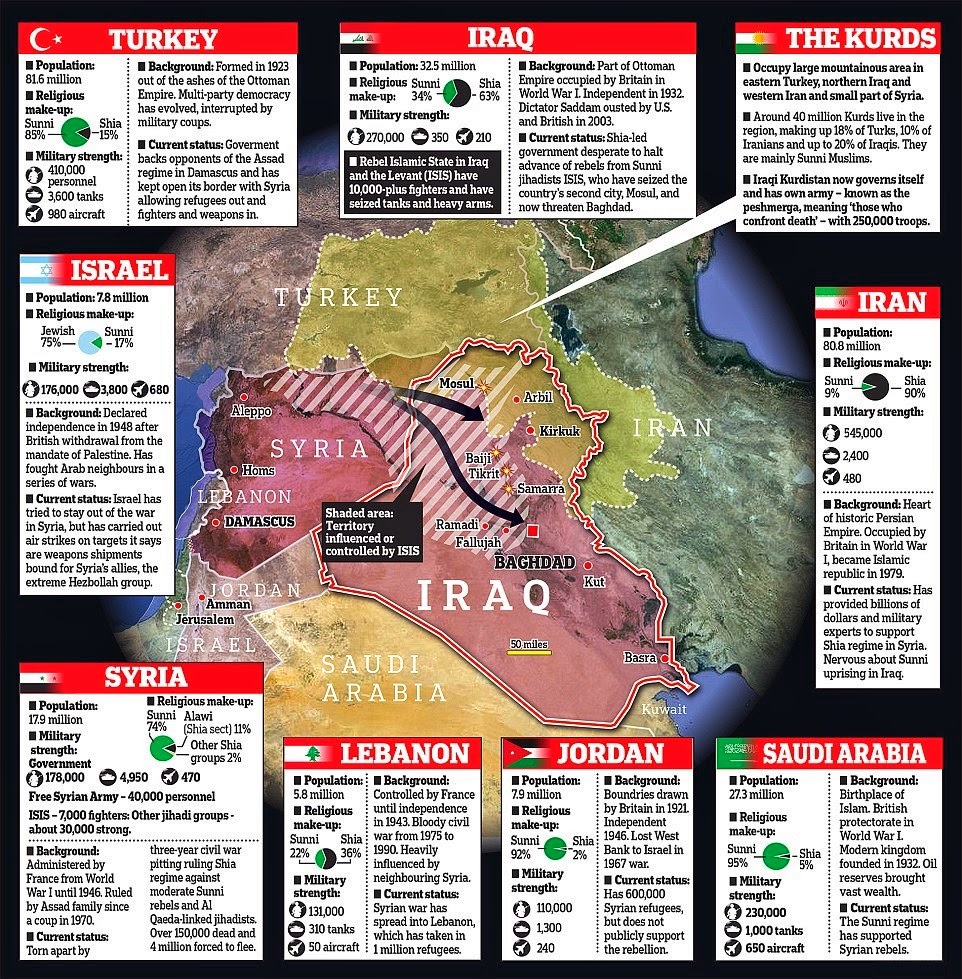 The national boundaries you see there mostly date from the late colonial era, specifically the Sykes-Picot Agreement of 1916.  They have little or nothing to do with the tribes and groups that live in the area - they were lines drawn on a map by diplomats and politicians who knew little about the area and cared less.

One of ISIS's goals is to destroy the Sykes-Picot boundaries.  Stratfor had a good analysis of that issue this week.

From the point of view of Iraq's jihadist celebrities, the 1916 borders drawn in secret by British and French imperialists represented by Sir Mark Sykes and Francois Georges-Picot to divide up Mesopotamia are not only irrelevant, they are destructible.

Today, the most ardent defenders of those colonial borders sit in Baghdad, Damascus, Ankara, Tehran and Riyadh while the Europeans and Americans, already fatigued by a decade of war in this part of the world, are desperately trying to sit this crisis out. The burden is on the regional players to prevent a jihadist mini-emirate from forming, and beneath that common purpose lies ample room for intrigue.

It's not just the threat to colonial-era borders that has me worried.  This conflict has the potential to escalate to all-out war, dragging in every major and minor player in the region.  As Oilprice.com points out:

A militarily successful Islamist force straddling over parts of Iraq and Syria will pose a real threat to the security and stability of those countries’ immediate neighbors. Even Syria, where government forces are fighting their own civil war, has offered to send troops to Iraq.

Turkey, Jordan, Lebanon, and, of course, Israel, would be the first to feel the effect of a takfiri victory.  But so would Saudi Arabia, Kuwait, Bahrain, Qatar, the UAE, Oman and Yemen. If ISIS is successful in Iraq, there is little reason to believe they would stop

Left unchecked, the Islamists could eventually threaten the stability of countries in Central Asia.


Again, more at the link, including another perspective on the significance of Sykes-Picot.

Stratfor notes that Jordan could be ISIS's next target in the region.  You can imagine what this would do to Israel's security.  It already faces an enemy in Syria, Hezbollah terrorists in southern Lebanon, and Hamas terrorists in Gaza, not to mention a recalcitrant Palestinian administration in the West Bank and a disrupted, unstable Egypt to the south.  The prospect of radical Islamic terrorism approaching their eastern border as well would be enough to give Israeli Prime Minister Benjamin Netanyahu a severe case of the hives . . . and Israel has never been backward in coming forward when she perceives a threat to her security.  Add to that the threat of a nuclear-armed Iran getting involved in the Iraq conflict to stabilize the situation there - potentially giving it access to Iraqi bases for its aircraft and missiles, which might then pose a greater threat to Israel - and the gloves are likely to come off for the duration.

I don't think the USA should become involved in Iraq again.  We lack the national will to do what has to be done there and win at all costs - particularly under the Obama administration.  Both it and the Iraqi government have been well described as follows:

Iraq isn't worth one more American life.  It's for the people there to work out their own destiny, whether we like it or not.  If we try to do it for them, they'll never learn.

Peter, while I am inclined towards non-intervention, all of the information suggests really bad outcomes if we stay out; especially for Israel at which point we will get involved and late and and at what cost....

@Differ: I agree there will be really bad outcomes if we stay out - but given the results of our last involvement, will they not be worse if we go in again?

It's a Catch-22 situation. We helped make things as bad as they are by misguided, bone-headed decisions over the past decade or more. I fear we'll only make them worse by making more such decisions. If you get the feeling I don't trust our political and military leaders to do the right thing, you're absolutely correct!

You mentioned the Sykes Pecot borders in the middle east...You coming from Africa know that it was the same there. There was much genocide in Africa because the boundaries drawn up are the holdovers from the European powers sphere of influences and it didn't follow the natural boundaries of each tribe. and once the countries were independent, the majority tribe went after the minority tribe. I have heard that is "always 5 minutes to high noon" somewhere in Africa because of this.

As before, we could force a positive (defined as less than disastrous) outcome, but as you so trenchantly put it:

"We lack the national will to do what has to be done there and win at all costs - particularly under the Obama administration."

There is therefore nothing reasonable that we can accomplish until there is a change of administration, and then it will be too late. Better get busy on that fracking!

I 'spect that ISIS will learn a serously needed lesson in humility(and dying) if/when they decide to go after Jordan. The local Bedouin are not all that fond of people who come bothering their king.( See what happens to Ma'an when the natives get restless there - every ten years or so.)