Watch what the Iraq conflict does to the economy


The US and world economies are already in a parlous state.  Now the outbreak of internecine warfare in Iraq threatens to drive them down even further.  Just look at what's already happened to the price of oil: 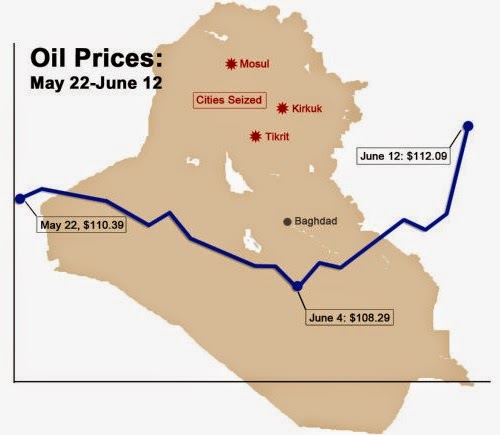 If (as appears likely) Iran gets involved on the side of the Shi'ites in Iraq to fight the (largely Sunni) Al Qaeda offshoot ISIS, expect the oil price to deteriorate further.  Other Arab states are likely to back ISIS (e.g. Saudi Arabia, Qatar, etc.), which will destabilize the oil market even further.  It's not inconceivable that an attempt may be made to close the Strait of Hormuz by a terrorist attack.  If that happens, expect oil prices to double or triple almost overnight.

It only needs one severe shock to bring down our economic house of cards.  The oil price might be sufficient to provide it, unless the situation in Iraq cools down very quickly.

It is just the price we pay for electing a community organizer as president, a person who has not so much as run a lemonade stand. We deserve what happens.

In both 2008 and 2012, I voted against the golfer-in-chief. And my state's electoral votes went for his opponent both times. What more could I have done?

Nope, the ones who deserve it are the communists and the members of the free-shit army.

Unfortunately, they are going to take the rest of us with them.

Two things:
First, the US is now producing a lot of oil. Rising oil prices are not as bad for the nation as they would have been ten years ago when we were importing a much larger percentage.
Second: I fail to see how a bunch of radical muslims killing off another bunch of radical muslims is really a bad thing for the world, or even that region, considering how water-, job-, and food-limited the region is. I mean, the collectivists on the left should be wetting themselves at the thought of slowing population growth in the region, and any associated oil price rise is just right in line with Obummer's stated policy of having prices "necessarily skyrocket."

I topped off the truck as soon as I heard that ISIS had gotten past Mosul. Two days later, fifteen cents/gallon higher.

Yep, I topped off earlier, and gas is up 8 cents/gal up here too.

Bad graphics are bad. Use a common zero on the x axis and the change is hard to even notice. The difference of 2 % is well within normal volatility.