If this can be successfully "industrialized" and manufactured on a large scale, it'll be one of the greatest advances in the fight against poverty ever achieved.

Incredible houses printed from cement could help to end the global housing crisis, according to the company behind their creation.

The properties, which are currently at the concept stage, will soon be used to provide safe shelter for people in El Salvador and could one day be expanded worldwide to house billions. 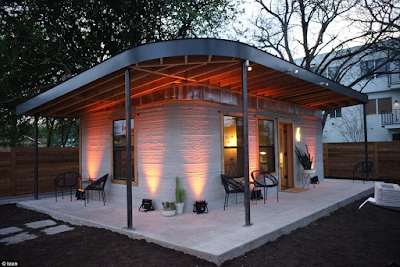 They could also offer a viable option for the construction of off-world colonies on planets like Mars in the near future, the firm says.

The company's Vulcan printer is used to create the properties, which can be built as large as 800 sq ft (75 sq ft) - around twice as large as the average 'tiny house' and comparable to one-bedroom apartment sizes in cities like New York and London.


There's more at the link, including lots of photographs.

Here's a brief video showing how the house is constructed of "printed" cement layers.

They're larger than many shacks in most shanty towns;  and, for a large family, it would be no problem to build two of them side-by-side.  As for utilities and services, that's a much larger job, and probably more expensive than the houses themselves;  but given affordable housing costs, that's not an insoluble problem.  Best of all, being built of cement, these are likely to be relatively safe against wind and weather, even hurricanes or nearby tornadoes.  The roof may go, of course, but that can be mounted with stronger bracing to keep it attached except in the worst conditions.

All round, this is an excellent start.  Anyone who's traveled and lived in the Third World will instantly recognize how important this is;  and, for that matter, it could revolutionize "starter" homes here in the USA for lower-income households.  Full marks to everyone involved for a really good idea, and making it work so well, so far.  Onward!

Can 3rd worlders afford a $4000 house? How is this better than building a house cement blocks by hand using local labor?

Insulated Concrete Forms were supposed to be the hot ticket, and take over the building industry 20 years ago. Only one contractor in my area builds with them, and his homes are high end, $300,000 and up. Same with ISPs.

Printing homes in the US will only be popular with the virtue signaling trendy. It will never be mass production.


As for two 800 sq. ft. units, that's a big house for many people. Mrs. legend and I raised 5 children in an 1100 sq. ft. double wide mobile home. Paid it off quickly and lived there 30 years. Small space isn't a big deal if you aren't a toy accumulator.

There is no silver bullet to solve poverty. It's wishful thinking that providing food and shelter to the poor will somehow make them less poor.

In most cases, it will only make them temporarily fed and sheltered, until the food is gone and the shelter is trashed.

We have seen this time and time again in the U.S. Look at Indian reservations or major housing projects like Pruitt-Igoe for examples.

I see many possibilities, but I'm going to side with urbane legend (above). The video is all pretty marketing pictures and pretty worthless as to how the thing actually goes together so it's hard to tell much, but this looks like High End Virtue Signaling At It's Finest.

Rich westerners (or westerners wanting to become rich) develop some interesting technology, beg for (liberal do-gooder) front money, and eventually get a PBS 1-hour special on how wonderful they are at building Jungle Hut ver 3.0 for the unwashed savages of folklore. Checks get cashed, backs get patted, awards handed out, to broadcast-quality scenes of dark-skinned people in colorful garb singing Kumbaya.

When these things meet social, community, economic and building code standards in Miami, Seattle, Tucson, and Buffalo, let me know. Until then I'll stand back and express curiosity about who's writing - and cashing - the checks.

What I see is a wood roof that was shipped to the site and installed in the traditional style. I also that it would have a limited lifetime in a termite friendly climate.
Other than the pleasant ability to build round and curved walls I have a hard time finding the plus here. moving a large machine on third world roads in hard to get to places, with a cement generating mobile plant, where is the benefit? Block and mortar has been around for centuries, every community has the knowledge base and the labor. I'm sure the cost for the same footage floorplan would be less for block construction and local labor.

Once utilities are added the all in cost will likely be similar to mobile homes. We see how well they work for poor people here...

Ok, the man didn't bring up building in the US until midway through the last paragraph, and then only as something that could be revolutionary - which rather implies tossing out the existing rules to do it. And the company that made the house isn't subject to any of the codes you're talking about.

Trying to beat him up over US rules when he's discussing alternative housing for the third world makes you look like tools, frankly. I understand that most of you have no experience with other countries, but it's just as ridiculous as talking about Cali gun laws as relevant when you live in Kentucky.

Yeah. Bitching about no running water or insulation - in a village in Central America or the Philippines (see below) where the community water system is the local well? YGBFKM!


While a member of a maker space in Minneapolis, I helped Andrey do some prototyping of the system used here:

It is very interesting, but unless it has rebar tied together, it will not last in an earthquake zone. And it would be interesting to see if it meets 175mph hurricane codes.

I know, earthquake and hurricane codes, so 1st world issues, right? But imagine if these did meet code, and used in Puerto Rico, or the Philippines, where there is some level of cash flow. Basic shell and roof (neat if it 3d printed a concrete roof) and the interior finishings are all the owner's responsibility.

S%^t holes like Haiti? Not so much. Unless some money actually is released from the Clinton Foundation...

Kind of wish the video were longer, though. I'm interested in seeing the machine in action.

I said: When these things meet social, community, economic and building code standards in Miami, Seattle, Tucson, and Buffalo, let me know. Until then I'll stand back and express curiosity about who's writing - and cashing - the checks.

Miami=hurricanes; Seattle=earthquakes; Tucson=heat; Buffalo=cold. And, as Anon mentioned, if the water source is the village well why worry about plumbing.

I realize this thing is Jungle Hut ver 3.0 made by large expensive machines, but some of the places it may be built have some of the weather conditions of Miami, Seattle, Tucson and Buffalo. Plus, the house better be of sufficient quality to last 30-60 years - just like building codes in America are designed for - because if it's planned as a short term deal, concrete is expensive to recycle.

These "Safe T Homes" are said to offer certain qualities like fire/termite resistance, and, as recently displayed by the destruction of Hurricane Matthew, weather-resistance.

Did you all miss the flashing warning sign? Done in AUSTIN! That makes this left-wing virtue signalling. Not much connection to reality, most likely.

1) Doesn't meet code anywhere but the Turd World, where mud huts with thatch roof are still a thing.

2) Would displace thousands of state-certified architects, union masons, and more importantly, government teat-sucking building and code enforcement inspectors, forcing them to get regular jobs.
If you threw a solar panel of six on the roof and added a battery, it would also end the power company monopolies, and make in-city living off-grid for all but the biggest commercial users. Can't be having any of that.

3) Ignores the inconvenient reality that people aren't homeless because they lack homes, but rather because they lack character, sanity, and the ability to not drink everything alcoholic, and shoot up or ingest every controlled substance ever imagined, to the exclusion of being able to feed, clothe, and shelter themselves to the minimal norms society will consider acceptable.

4) If you want to solve "homelessness", bring back incarcerative lifetime nut wards, and put the indigent lazy on chain gangs for six-month stretches, make handouts without a work component for everyone able a public nuisance crime, not a charity, and take all the fun out of camping under cardboard on urban streets. (If your church wants to hand out food, you should be required, by law, to permanently shelter those fed on your premises, to code, or face the civil penalties for that failure and their depredations and ancillary effects on the community. Fair is fair. You feed the dog, you clean up after it.)

That latter wants steel in the spines of civil government, not concrete in urban lots.

that being said, if I could legally get one of those in the local metropolis, and use the real money not wasted on the requisite McMansion hereabouts for a quiet few acres of country retreat, I would happily do so.

But then the local government couldn't fleece me of 95% of my disposable income 24/7/365/forever, including 200 fees for services not provided, so there's no interest at City hall in doing that, or anything like, whatsoever.