What the actual expletive deleted???


Courtesy of Vox Day, we learn of this message: 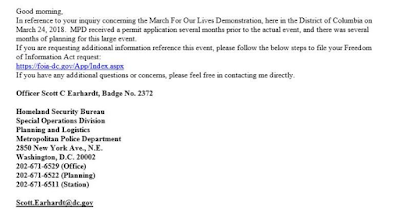 Click the image for a larger view.  Here's the critical sentence:


WTF????  Permits for the March For Our Lives demonstration were applied for several months before the Parkland shooting - which was allegedly the event giving rise to the march - had even happened?

I think both of those possibilities would be worth researching in greater depth.  However, I simply can't credit a third possibility - that the Parkland massacre was planned well in advance, and "supporting actors", permits, etc. recruited and put in place well ahead of time, in order to exploit it for maximum propaganda value.  Nevertheless, you can bet your boots that some conspiracy theorists and crackpots will believe that.  I certainly can't argue that progressive, far-left individuals and groups aren't capable of such evil - the historical record speaks for itself - but I don't think things have sunk that low yet, in these United States.  If they have . . . God help us all.

I look forward to further investigations of the March For Our Lives event, and who was behind it, and where this particular cause du jour is going.  Note that, just as we've seen in the past, almost every other left-wing shibboleth has gone very quiet while the principal actors exploit the hell out of Parkland.  I'm willing to bet that many of the same activists and behind-the-scenes organizers that were involved in earlier protest activities have been "re-purposed" by their handlers to work on March For Our Lives.  As soon as something else worth exploiting pops up on the radar, March For Our Lives will also go silent, and be replaced by a more news- and publicity-worthy activity, while those organizing and funding it will take up the new challenge instead.

I'm sure readers have already noted that 90% of the demonstrators at March For Our Lives were not teens or schoolchildren.  They were adults.

Contrary to what’s been reported in many media accounts, the D.C. March for Our Lives crowd was not primarily made up of teenagers. Only about 10 percent of the participants were under 18. The average age of the adults in the crowd was just under 49 years old...


That's from a left-leaning source, too - no bias there.  The kids were being used as cover for a much more organized, much more professional political ploy, despite loud claims by the organizers that this was a "student movement".  It joins the many other progressive pressure groups that work together to influence national debates, regardless of the facts.  Proof, yet again, that there is no truth in extreme progressives, and no honor.  (To be fair, there isn't any in extreme conservatives, either.  Extremists of any ilk are simply not to be trusted.  Period.)

While not likely, the third possibility must at least be examined. After all, if one were to tell you that an investigative branch of the Federal Government plotted to illegally sell guns to criminals with the hope that those guns would cause a crime spree that would allow for more gun control, you would say the same with regards to its likelihood, but we all now know that "Fast and Furious" happened.

I am inclined to think that the first scenario - a quickly re-purposed permit - is the more likely. While it's possible that the low level government functionaries who process permits would tolerate a parade of permits that weren't used, month after month, it seems unlikely that we wouldn't have heard of it. Gossip is the life blood of the District, and the gossipers tend to assume that everyone they are talking to sports their politics.

The date tells us what we need to know. It was likely originally a DREAMer protest, as the program was set (and did) expire the next day.

But they're lower on the issues list - regular lefties hate the 2A more than they like illegal immigrants.

Hi Peter,
After COINTELPRO, the Mena airport, the Fast & Furious gun running, the Ruby Ridge massacre, the Waco massacre, the Pulse gunman's father being a FBI asset, etc, etc, the third possibility was what immediately occurred to me, and when I read that on VoxDay, I immediately assumed the third possibility was the truth.
Unfortunately, as far too many sites have definitely demonstrated, one person can't fight against the deep swamp, no matter how well armed, so just like Cassandra, knowing the truth doesn't mean that you can do anything about it.

One can hope that the era of MarchFor's is drawing to a close. How many people are left still uncommitted, one way or another, who will be convinced of the virtue of disarming the public? Or for that matter, of celebrating Thanksgiving or being a veteran? Thses rallies are so obviously choreographed that expecting anyone to modify his behavior in response to them is like expecting people to stop pot-hunting waterfowl after having attended a performance of Swan Lake.

Rereading it, I see I missed my major point. If you had asked people at that time whether that those events were even possible, let alone the U.S. Gov't was doing it, they would have told you to "adjust your tin-foil hat" and dismissed you. But every one of those events were being sponsored/done by the U.S. Gov't (swamp). And I don't find it hard to believe the events were in coordination with the DNC, given how many of the U.S. Obama/Clinton officials left their U.S. Gov't position to immediately assume a position in the DNC/Left outside of Gov't. And that doesn't count how many passively supported what was being done, because they count themselves as "liberal", and not "knuckle-dragging mouth-breathing conservatives".

Possibility #2 would seem to also imply that they have a significant number of 'on-call' demonstrators willing to come out and demonstrate for the Issue and Position of The Moment.

Of course, we know they do - a large amount, probably even the majority, of the demonstrators, at least in DC, were the Usual Suspects, or at least from the Usual Suspect Groups of professional and semi-pro activists.

Interesting to note that Antifa didn't show up. I can think of two reasons for this: 1) Antifa's typical violent antics, especially violent antics by large groups, provide a good justification not only for owning guns, but for owning guns such as AR-15s and AKs; and 2) Trying to say you're "Anti-Fascist" while arguing FOR gun confiscation creates too much cognitive dissonance, even for them.

I am going with fake.

DCPD does have an individual with the same name but he is a detective, ERT and Negotiator. Dobtuul the kind of person assigned to a desk eating donuts and issuing permits

Given the options, it would be interesting to file some FOIA requests across the country and learn if there have been multiple permits filed for events, and by whom; if the Left is filing lots of permit requests and not using them, that would be good to know. Also good to know would be the funding sources for the permits and any resultant activities, which information could - possibly - lead to uncovering a managing structure, if indeed one exists (there may be no specific "managing structure" but only a well interlocked set of shared interests; in any event, either would be useful information).

In line with that, anyone who is unaware that the Left lies, suborns, and deceives simply hasn't been paying attention.

As to mass deomnstrations, Leftists are, by nature, herd animals, most comfortable as members of self-approving groups. The "like" and "friend" buttons in social media applications brilliantly support that "grouping" mindset.

This is always dismissed as moonbat hallucination, but it is possible that mass shooting events could be driven, at least to some degree, by external influence. Given that they are so frequently committed by individuals with mental infirmities, or who are suffering severe mental or emotional distress, one has to ask if it is entirely impossible that some such individuals could, and may have been, cultivated, aided or abetted by forces interested in social chaos for their own ends?

Looks like Miguel is probably right...over at 'Knuckledraggin', comments have link to newspaper article about how they didn't get route they wanted because of conflict with previously scheduled event.

The March for Our Lives permit application was filed by Deena Katz, a co-executive director of the Women's March Los Angeles Foundation. This wasn’t just a little bit of professional activist assistance.

The application lists Katz as the “Person in Charge of Event”.

Others have reported it was filed by Jeri Rhodes, former CFO of Greenpeace, so she's involved somewhere, too. Jeri went to "Win Without War", which was tied to Greenpeace and the Friends Committee of National Legislation, a high-powered, left wing lobbying organization.

There were about a dozen other big money, leftist groups like Moveon.org, the various George Soros and Michael Bloomberg money laundering schemes (Everytown, the Demanding Mommies), Mark and Gabby Giffords, the American Federation of Teachers, and most ironically, Planned Parenthood - suddenly caring about children's lives!

Fast and Furious was planned and executed to pass the UN treaty on small arms due to the international nature of the smuggling. This would be defacto gun control as treaties can supersede the constitution. Remember the democrats had 60 seats in the senate a few RINOS added to that and BINGO gun control