Saab's GlobalEye: an example of too many military eggs in one basket?


Saab's new GlobalEye, an airborne early warning and control platform, has just made its maiden flight in Sweden.  Three have been ordered by the United Arab Emirates, and the company is pitching the aircraft (particularly its newly enhanced radar system) as a replacement for NATO's ageing Boeing E-3 Sentry AWACS aircraft in due course.  Here's a video clip of the first flight.

The base platform is a Bombardier Global 6000 large business jet.  Combat Aircraft reports:

The GlobalEye features the new Erieye ER (Extended Range) active electronically scanned array (AESA) radar in a ‘balance beam’ fairing atop the fuselage, which Saab says offers a 70 per cent improvement in range performance when compared to its predecessor. The aircraft also features the Leonardo Seaspray 7500E X-band maritime search radar and a FLIR Systems electro-optical turret below the nose. 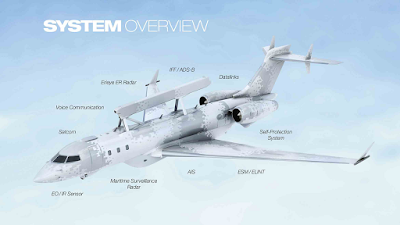 The GlobalEye has an 11hr+ endurance — crew comfort and overall performance mean the airframe is ‘ideally suited for special mission specifications’, according to Saab. The cabin has five operator workstations plus a rest area with four seats, and can also be configured for remote operation and mission support from a ground station. The airborne operator complement is intended to be flexible, based on air force needs, up to a maximum of nine. The flight crew comprises two pilots.

On the face of it, that's an exceptionally capable aircraft, able to deal with a wide range of surveillance, command and control missions and tasks, on land, at sea and in the air.  However, I suspect that simultaneous, multi-tasking capability may offer its own set of problems.

First off, one can have too many things happening at the same time.  Anyone who's been in combat knows the truth of Helmuth von Moltke's (paraphrased) dictum:  "No plan survives contact with the enemy".  In my (admittedly limited) experience, the same thing can happen to command and control systems and procedures, particularly when problems and their effects "cascade".  What happens if too many things are going on?  One can lose sight of the forest for the trees;  or, alternatively, one might concentrate on the whole forest so intently that one fails to notice problems affecting a few trees.  Small issues can easily escalate into much larger ones, if not nipped in the bud early on.  Will a single command and control node be able to cope?

Until now, sensors have typically been distributed across multiple command and control platforms:  for example, in the USAF, the E-3 Sentry has handled AWACS duties;  variants of the RC-135 and other aircraft have handled SIGINT, ground surveillance and control, etc.;  and maritime ditto has been dealt with by the US Navy.  GlobalEye combines all these duties and sensors into a single aircraft, whose sensors can reach out for several hundred miles in all directions.  With so many duties to perform, and so large an area to cover, will its operators be able to handle all the tasks expected of them?  In theory, they might . . . but in practice, perhaps not so efficiently as theory would suggest.

There's also the factor that this is an all-in-one solution.  If I were the enemy of a nation fielding GlobalEye, I'd realize that I have to take out those surveillance aircraft at all costs, at the very start of hostilities (or even before).  My enemy would be relying on them for command and control;  therefore, if they aren't available, his command and control will be severely impaired, just when he needs it most.  I'd do whatever it took to get rid of them - special forces attacks on their base, operators with ground-to-air missiles to shoot at them as they took off or landed, sabotage of their maintenance facilities and/or spare parts, assassination of their crews, and (of course) attacks on them during their missions, provided I could get through the defenses that would undoubtedly try to protect such vital assets.  What's more, because these are very complex, relatively expensive aircraft, there won't be very many of them (for example, the launch customer, United Arab Emirates, has ordered only three).  Therefore, damaging or destroying even one of so small a fleet might have a disproportionate impact on my enemy.

Those aircraft (and their crews, and support facilities and personnel) might as well have great big targets painted all over them.  If they can be adequately protected, that's great . . . but I suspect most armed forces (including the USA's) would find that rather difficult across the entire spectrum of potential threats to them.  I think Globaleye is a great peacetime or limited-hostilities (i.e. terrorism rather than all-out war) solution for a nation like the UAE.  Whether it will continue to be so during a major conflict is debatable.  Can a minor power like the UAE defend it against threats like those discussed above?  Your guess is as good as mine . . . but mine is, probably not - and without the aircraft, on which they'll undoubtedly come to rely, will the UAE's command and control structure be able to cope?  Will it become so dependent on such technology that it can no longer function without it?

(That's a question the US armed forces, and those of other major powers, must answer as well.  In an increasingly technological environment, the loss of satellite communications, for example, would instantly overload the radio spectrum to such an extent that many modern weapons systems would no longer be able to function.  Could the USAF or US Navy operate as successfully if denied the use of some or all of their command and control technology?  Almost certainly not.)

I think that the future belongs to drone aircraft out collecting -- possibly for an AWACS aircraft, because that sort of mission profile allows the collection platform (does it really need to be another aircraft??) to be distant - as in half a continent away. In the case of the UAE, it may not be a bad choice because of the rather small operating area they have and the low intensity conflicts that they anticipate being involved with -- and they have the money to pay for them.

As you point out, they're targets.

Mixing an active radar emitter with a SIGINT platform is just asking for trouble. Any receivers sensitive enough to be useful will be burned out or blinded by the plane's own emissions.

The answer if this is a good solution depends o the cost and the most likely scenarios for use.

McC is right, and the 'other' problem is throughput for the 'offboard' management of sensors. There isn't enough bandwidth available to actually DO that.

Saab has an excellent 20th Century system. 21st Century systems are
tending toward redundant, dispersed, meshed, unmanned sensors with
the battle staff on the ground.

As for overload, think of the movie scenes with more folks coming in
and firing up more workstations as DEFCON rises. On the ground, you
can tolerate normally idle workstations, and can have multiple sites
able to link to the sensor network.

And, yes, the military has been very aware of satellites as a potential
single point of failure for *decades*.

The UAE is a tiny conglomeration-country with a minimal problem set.
Security for the three a/c will be minimal, but obviously a high value target.

But as noted combining active emitters with passive receivers is a non-starter, and I doubt 9 operators can manage combat operation like 50+ on an AWACS, so I doubt the capabilities are anywhere near commensurate.

But if a country can afford a few of the smaller planes, vs. none on the order of an E-3 or equivalent, this will be an improvement of their potential activities of an order of magnitude.

Columbia or Mexico going against cartel drug flights, for instance, gets them an AWACS at a price they can easily manage, for a much more compact problem set. They just need to see lots of little planes, not defend against the Soviet Air Force circa 1985.

Think of literally dozens of such platforms from Taiwan, the Philippines, Indonesia, etc., and the problem of the Chinese PAF becomes orders of magnitude greater.

Ditto for Russians vs. dozens of platforms fielded onsie-twosie everywhere from Sweden to Macedonia.

Ultimately, the answer is, indeed taking that smaller AESA array, and distributing it, or something even smaller, to fleets of UAVs, able to operate from anything down to straight highways and private strips, and putting the operators in a bombproof central station or stations, and running the whole by datalink.

Then you get hundreds of operators, but you don't need to put any of them on the plane.

If whatever OPFOR you're working against shoots down a drone or two, you just send up a few more.

What you're looking for is the airborne equivalent of sonobouys and the SOSUS network, rather than sending in a CVN in a carrier task force.

Because of the skill set required to run the unique and complex systems, there will be a group - probably fairly small - of very highly trained system operators.

Because of the uniqueness and complexity of the equipment, there will a group - probably fairly small - of very highly trained support technicians with highly complex test and repair technology.

Waddya wanna bet all 3 planes will be parked adjacent to each other - probably kept in the same hangar - to make the maintenance and support easier, and they'll be right next to the barracks and maintenance shops for all those very highly trained folks?

Of course, if all they're worried about is having a Forward Operating Sitting Duck platform so they can posture more brazenly toward their neighbours in Iran and Qatar, why not simply buy those business jets with some sort of ELINT noise generating platform instead?

Then again, perhaps this actually is the UAE's idea of an expensive, gold-plated decoy, and that the "warning system" consists of these Forward Operating Sitting Ducks getting shot down.

They should paint "Shoot Me First!" on the fuselage. The aircraft must admit a huge energy spectrum to lock on to. An Iranian F-14 will fire a Phoenix at it from a long way off.

The Emeries like their toys. Last time I was there they were about to buy Ospreys.

Anonymous is missing a small point - the Pheniox missile has been used exactly 3 times in combat... One plain failed to track, and the other two's engines failed, and just fell off the rails when launched. How well do ya think Iran's stockpile has been maintained over the last 40 years, and would it matter?
But I agree the best use of these is collection of data from drone sensor craft, at long range...Which could do just as well with ground stations.