We're almost there!  One more DooD and we'll hit a thousand!

Today's award, courtesy of a link provided by Australian reader Snoggeramus (who's contributed many Doofi to our collection), goes to a hapless father in Queensland.

A Queensland man used insect spray as a flamethrower to kill cockroaches, blowing up his Mount Isa kitchen in the process. 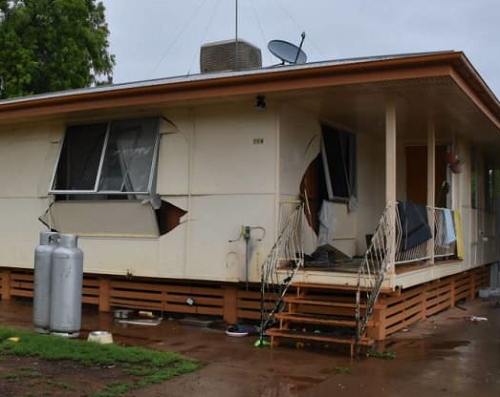 Luckily, the three children in the home, aged nine, 11 and 17, were unharmed after the Wednesday night explosion, which occured about 8pm.

Not so lucky was their father, who was taken to Mount Isa Hospital with “abrasions” to his face and arms.

“It looks like the guy was using pest spray in the kitchen then a flame was lit which caused a small fire,” a police spokesman said.

Yep;  aerosol insecticide is, indeed, a pretty useful fuel-air explosive (in modern parlance, a thermobaric weapon) in the right concentration.  As kids, we used to take cans of insecticide and hold a lighter beneath the jet of gas as it came out.  It made a pretty good improvised flamethrower for various uses . . . none of which were approved of by our parents!

The picture of that house brought back many memories for me.  It looks like it was made of asbestos sheeting, or something like that - a common building material during and after World War II.  A lot of country and coastal houses in South Africa (particularly holiday homes in tourist resorts, rented out by the week) were built along similar lines in my younger days.  It looks flimsy, but given the weather and climate conditions in those areas, it was adequate.  When a big rainstorm hit, the noise of the drops hitting the roof and sides was deafening!

Aha... not "used as a flamethrower" which is more what you described - which would not be an explosion risk, but could start a housefire. But simply used and the propellant (likely propane) concentrated enough that the pilot light of the stove ignited the fuel-air mix. It's been some time since I've seen "bottle gas" but then I've been looking. City supply for gas, and the larger tanks at another place before that.

There is good reason the CO2 monitor near the furnace and water heater is also a fuel gas alarm.

Ah, memories of summers with my grandparents in the sugarcane swamps of Florida. The sound of rain pattering, I mean pouring, I mean pounding on the tin roof of the trailer while the palmetto bugs try to carry away the leftovers before the dishes get washed ...

Hell, those "Palmetto Bugs" (the American Cockroach) were trying to take the dishes. They just were short of the critical mass to accomplish it.

I assume that the Aussie equivalent is "Cor, mate, get a load o' this!" An excellent reason for why we need to teach male-centered science in schools ("gents, this example is why we don't ... wait, out of the blast zone first"). Saves a lot on exploding houses, trailers, spray cans, you name it.

My hope is that no one reading your blog is excited enough to volunteer for the dubious honor of becoming the D1K (Doofus 1000).

Living in the Florida swamps, I've seen Palmetto Bugs that I wouldn't consider anything under 12ga. adequate for.

It was a running joke in our house for ages that the roaches can't build up resistance to a flame thrower like they can insecticide, but the flame thrower was much harder on the furniture.

This guy was right in choice of weapon, but didn't think it through well enough.

In the book, "Jungle" a lost hiker uses an aerosol can as a flame thrower to ward off a jaguar.