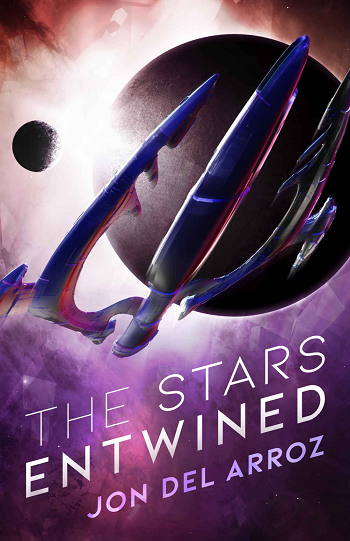 The blurb reads, in part:

After several recent attacks along the border of Aryshan space, internal affairs agent Sean Barrows is brought to Palmer Station to ensure the Interplanetary Navy’s on the right track in their terrorism investigations. What he discovers could lead to the biggest war the galaxy has ever seen. Sean’s work leads him to his most dangerous assignment yet—into the heart of Aryshan territory as a spy.

Meanwhile, Aryshan Commander Tamar is being groomed by the Ruling Committee to one day assume leadership of her people. First, she needs to prove herself in warship command. As tensions increase with Earth, Tamar finds herself increasingly isolated as one of the few in opposition to the war. Her troubles deepen when she comes face to face with a new member of her crew, the most intriguing man she’s ever encountered.


Jon and I have corresponded for some time, and we met at LibertyCon last year.  I had the pleasure of recommending him to Vox Day to write the novelizations of some forthcoming comics.  I'm looking forward to reading his latest book.

By the way, Jon:  your surname, in Spanish, means 'rice'.  Does that mean that with your new series, you've proved you can 'rice' to the occasion?  Or does that go against the grain?

Oh nooooo! Yesterday Moira Greyland dropped "Arroz by any other name..." and now this ;)

Thanks for posting this Peter! I hope to see you at LC (and spend better time with you and Dorothy) this year!

Jon, it sounds like an interesting intersection among space opera, tech thriller, and old-fashioned romance. Bought it, you're at about place 5 on my kindle list.

If I see a novel titled "The Blaster of Savalla" (or worse, Moira persuades you to write "The Pirates of Panzace Nebula") in the series, I'll know you had to drop back and pun.

Picked it up just now. Looking forward to it!