As I mentioned some weeks ago, I've been considering buying an Apple computer system for use with Vellum, a desktop publishing program.  After a lot of to-ing and fro-ing (including the use of an old Apple computer donated for testing purposes by friend and fellow author Cedar Sanderson, for which I'm very grateful to her), I decided to go with a Mac Mini, the cheapest entry level system.  Following reader advice in that first post, I bought a lower-cost Apple-refurbished and -guaranteed computer.  I've been setting it up this week, and I'm enjoying the learning curve.  After so many years (over 4 decades!) using IBM mainframes, DEC minicomputers and PC-architecture personal computers, this is a new departure for me (of which more later).

The Mac Mini comes without keyboard, mouse or monitor, which is why it's relatively low-priced compared to the rest of the Apple range.  Fortunately, I had all those components already.  However, I'm also still using an HP laptop computer, and have other PC-architecture systems in the house.  I don't expect to become an Apple-only or PC-only household anytime soon.  That means there's the potential clutter of multiple keyboards, mice, etc. on an already crowded desktop - not ideal, particularly when I have reference books open, and other things that need space of their own.

I was therefore very pleased to come across this USB switch selector on Amazon.com. 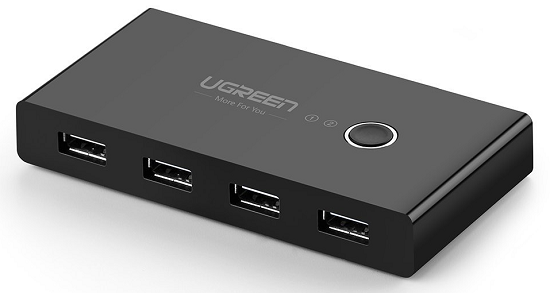 It allows you to connect up to 4 USB-interface peripherals to one side of the box.  I've plugged in a corded keyboard and mouse, a laser printer and a scanner.  On the other side of the box are two more USB connector sockets, which you can connect to two different computers.  By pushing the button on top of the selector, you can use all the peripherals with either computer (but not both at the same time).

Using this little box, I now have all four peripherals working happily with both my Mac Mini and my PC-architecture laptop.  All I had to do was make sure that the appropriate device drivers were loaded on each computer for the printer and scanner.  It's very nice to have one of everything, instead of two - not to mention taking up a lot less desktop real estate!  I simply power up the computer I want to use (or both of them), and use the selector button to direct the peripherals to the one that needs them.  I can even swap back and forth between them in mid-use, just by pushing the button.  Very useful indeed.  For mobile computing, I unplug the laptop from the switch selector and go on my way, using its own keyboard and touchpad while on the road.  (I can also use them while it's plugged into the switch selector, of course, which has come in handy a couple of times.)

I'm enjoying learning how to use Apple's operating system and software.  They're reasonably intuitive, so I haven't had any major problems, and there are plenty of articles, tutorials and videos online to provide any help I need.  I'm starting to understand why Apple fans so strongly prefer their systems.  I've heard more than one say that they want to do things with their computer rather than to it, and that's why Apple is "better".  I'm beginning to agree with them.  The Apple OS requires considerably less tinkering to get it where I want it, and it takes care of a lot of stuff behind the scenes that I'm used to doing "manually" under Windows.  I'm impressed.  Also, much of the software I use (LibreOffice, Private Internet Access, Dropbox, Dashlane, etc.) is available in MacOS versions, making the transition easy.  The only one I miss so far is Irfanview, which doesn't have a Mac version.  I'll have to find something similar to replace it on the Apple system.  (GIMP isn't really a suitable replacement - it's a lot more complex and difficult to navigate.  I want something powerful, but simple, without a major learning curve.  I'm a writer, not a graphic artist!)

It's too early to say yet, but I might be tempted in due course to transition entirely to Apple hardware and software, and move away from the PC altogether.  Being my own boss as a writer and not having to run an employer's PC-specific software, I have that flexibility.  I never thought I'd say that (yes, I've joked about Apples and their fanbois for many years, along with the rest of the computer world), but now that I'm actually using an Apple computer, I'm enjoying it very much.  We'll see what the next year or two brings. (I can hear the catcalls now . . . "Come over to the dark side!  We have Apples!")

Labels: Books, Boys and their toys, Computers, Me me me, Technology, Writing
Email ThisBlogThis!Share to TwitterShare to FacebookShare to Pinterest

And don't forget, besides Vellum there is also Scrivener.

Another thought about multiple devices. There is a free (for non-commercial use) program called Teamvier (www.teamviewer.us). It is a complete remote control program allowing you to connect to almost ANYTHING on your network OR access another's remote machine (only if THEY grant access) anywhere there is internet access.

Personally, I use a 2-port KVM (Keyboard, Mouse, Video) switch. And then, I use Teamviewer to control, diagnose, update, whatever(!) two Linux, 2 Win 7s, 2 iphones, iPad AND a Win 10 machine over 150 miles away. All of this has, at one time or another, been from a McDonalds free WiFi connection.

Being on the dark side so long, you've got it backwards. The correct admonission is, "Come into the light; we have Apples."

And yes, consider Scrivener on the Mac. It's at version 3.0.2 and I do all my book and short story work there, from organizing the research results, plotting, character arcs, writing and shuffling chapters and scenes, manuscripts for submissions PDFs for small volume printing, and creating ebooks, etc. I know many who use it and then shift to Vellum for their final production. Works well cross-platform through Dropbox (but the PC version is down rev. You'll prefer the Mac version. Trust me.) And there are some very active and helpful support groups on Facebook. You can start simple and build up over time. I'm three years into it and use about half its capabilities. Absolutely no thought of going back to *any* "word processing software" no matter what brand or label. Scrivener is for professional writers of major works. You definitely qualify!

Graphic Converter is a rough equivalent of IrfanView for the Mac.

It's not free, though.

If you like or do not mind the default OS X color scheme, it's fine. If, however, you loathe white-hot backgrounds but don't want brain-dead film-negative views then... OS X makes Win 3.x look more capable. Sad, really.

Peter, if you find yourself with multiple monitors/keyboards in front of you I would suggest you look at https://symless.com/synergy. This software allows you to use just one mouse/keyboard to control multiple computers with multiple monitors, without any hardware switching required. Works across all platforms too.

Also, since you already own a licensed copy of Windows, if you can't find a Mac OS equivalent you want to use for something important, you can very easily install your copy of Windows on your Mac. Given your readership this was probably mentioned earlier, but in case it wasn't or it dropped off your radar...

Both Parallels and VMWare Fusion work well, both are $80.00. Fusion is a bit more targeted towards enterprise computing, but both are very good at the consumer level as well.

Both, with occasional teething problems around version and OS upgrades, will allow you to cut and paste text—and with not much more trouble share files—between platforms.

There are free ways to do it, too, but they require more sticking your head under the hood than you probably want to do to get your tools running.

For bit-mapped graphics editing on Macs, use Acorn from Flying Meat Software. It is similar to Photoshop, but is MUCH more affordable! Acorn is $29.99, a ONE-TIME payment, not the horrible rip-off of the Adobe subscription model. I use Acorn a lot.

Have you looked at krita (https://krita.org) for photo editing?

I was going to ask if you had looked at Linux (I use the Fedora distribution), but I don't know if Dropbox has an official linux client (graphical, not command line) -- it looks like it does, but I haven't used it.

I also don't know what other software you use, so there is probably something that doesn't run on Linux.

From your list of software, it appears that they all support Linux in one form or another, although private internet access looks more difficult than it should be.

Technical term is a KVM switch, and they used to be highly proprietary and require a ridiculous and expensive custom cable with one plug on one end and multiple plugs on the other....three cheers for common interface design.

As has been pointed out, you can do this in hardware or software - I've used and maintained both.

In my opinion for the average home user the hardware solution is much more user-friendly from a maintainability perspective. Unless you have experience with troubleshooting, including network troubleshooting, a software solution for this is too fragile in a world with firewalls and auto-updating software. A KVM either it works or you replace it. With a software solution, it stops working, and you spend hours trying to figure out what broke or changed. No fun and a huge time sink for a creative person.

I have a few creative friends, and I tell them if you can do it either in software and hardware, and the hardware cost is a) reliable and b) less than a gross day's pay, do it and write it off, because that's the average time for a competent user to fix a software problem. And that doesn't include the frustration.

If you go the VM route, highly recommend virtualbox.org (free) and does almost everything you pay VMWare or Parallels to do.

Beats the hell out of a Black Box... sigh

I second AM’s endorsement of Graphic Converter, but you might be surprised at the power of Apple’s bundled Preview app.

If you use Irfanview for scanning, VueScan is the solution.

@Merlin: It's a momentary button.