Today's award goes to an inept car thief in England.

A man who attempted to steal a Mini Cooper in Northumberland became wedged on a narrow set of stairs and had to be freed from the vehicle. 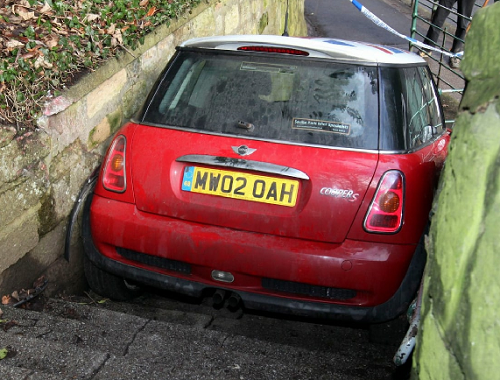 The car, with Union flag branding on its roof, was discovered in the Castle Walk area of Carlisle Park, in Morpeth, on Monday night. The matter was reported to Northumbria Police whose officers cordoned off the path.

However, the car remained in its awkward position all morning, prompting those passing to stop and take pictures.

Police ... said: "Emergency services attended and the driver was freed from the vehicle, a red Mini Cooper S. He was not injured during the incident.

"Enquiries into the incident are ongoing but a 31-year-old man has been arrested on suspicion of aggravated vehicle taking, and remains in police custody."

Lesson learned:  when planning your escape route, make sure it's suitable for the purpose!

This reminds me. Some years ago Jerry Constantino had a regular feature in Shooting Times Magazine called the Dumb Crook Lineup. I always read it first. Check this out and enjoy. Be ready to laugh out loud at some of them.

If he has stolen an older model it probably would have worked just fine.

"aggravated vehicle taking"? How does that differ from "theft"? Even after spending a lot of time in jolly old England, I never knew our dictionaries were that different.

Most likely the perp took the car because he was too drunk to walk and because the owner (who obviously had left the keys in) had already passed out back at the party.

Why didn't he just go out the back hatch?

In English Criminal Law theft is different from “Taking without Consent” as with theft, you need to prove that the offender intended to “permanently deprive” the owner of it.
“TWOC” They were driving the car without the owners permission-slightly easier offence to prove (and plead guilty to!) It would be aggravated as the car was damaged at the hands of the defendant.

"The matter was reported to Northumbria Police whose officers cordoned off the path."

That sounds like the most useless thing for the police to do to appear to be doing something.