Today's award goes to the worker at Planned Parenthood in Pennsylvania who sent out this tweet in the name of that organization: 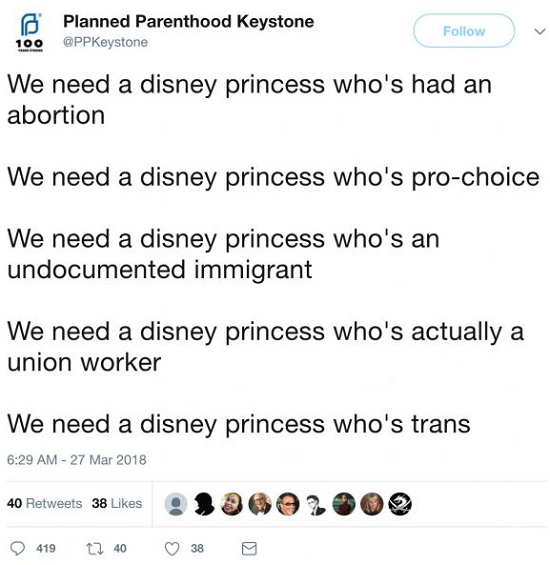 The tweet was taken down almost immediately, as soon as someone realized how utterly asinine it was . . . but the damage was done.  It had already been screenshotted and archived, and has since gone viral.

Personally, I don't think we "need" a Disney princess at all.  I'd far rather little girls were raised by responsible parents, and taught to behave like normal human beings!  There are few enough adults (of either sex) who know how to behave, let alone young children.

I almost feel sorry for Disney. A more accommodating company for the liberal LGBTQetc. lifestyle would be hard to find. But somehow it does them no good.

Yes, Disney Princesses are an unrealistic fantasy. So is Batman. Or Robin Hood. Or Gilgamesh. People who worry about little girls having unrealistic fantasies are (I've noticed) adults who apparently cannot tell the difference between possible goals and deranged fantasy themselves.

In general, I worry about folks who talk about whether we 'need' things like fantasy. i suppose we could live without it, but why would we want to? To please a bunch of self-nominated 'betters'?

If they had a Disney princess who was a union worker, maybe she wouldn't lose her job as princess to an undocumented immigrant or a foreigner with an H1B visa.

Well people have said it before but since Disney bought Fox, doesn't that make Klinger from MASH a disney princess?

In 2013 Disney laid off 250 Disney World IT employees replacing them with Indian H-1B visa workers at half the salary.
The laid off workers were offered the option of staying on to teach their jobs to the new hires and receive a generous severance package, or if they refused they would be fired and receive nothing.
Unfortunately 30 of the laid off workers challenged the Disney action in labor court and lost.
And the media, with close connections to Disney, have been strangely silent about the whole affair.
Think about this when considering a Disney theme park vacation or even catching the latest Disney movie.

Disney princesses? Let's look at the last stunning role model for the American (global?) population of females that Disney was able to produce... anyone got a good guess? How about Miley Cyrus?

Because that turned out so well (sarcasm)... but maybe they can take it a little bit further next time?

We need an organization that realizes letting some random schmuck handle their social media is not a good idea.

Ignoring the fact that the trans princess can't have an abortion, tell us how Affirmative Action Princess and the Frog did at the box office?

{Hint: You could hear the SPLAT! from Burbank to Shanghai.}

Lesson Eleventy-seventeen in why SJWarfare is for people who suck at math and science.

Nope I don't believe it. I did laugh out loud though.

They never show they hundreds of little girls who slave away from the time they can hold a tool to provide for the princess. And they do so at near starvation because the food rent is to damn high.