"A Sinking Ship of State Drowns Everyone"

That's the title of a study by the Gatestone Institute, examining President Biden's infrastructure spending proposals.  It provides the following list of key points.  Bold, underlined text is my emphasis.

Note the growth in our national debt during the 21st century alone. 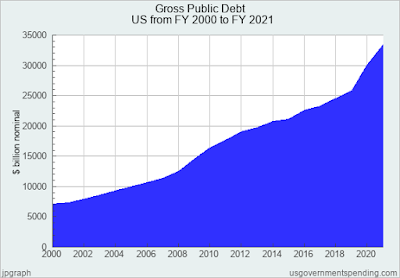 If President Biden's proposals are adopted, over and above our now-traditional budget deficit spending, they'll send that chart almost vertically upward.  We'll add at least $10 trillion to the national debt by the end of next year, what with "regular" budgetary expenditure and "infrastructure spending" on top of that.  Almost all those dollars will have to be added artificially, by the Federal Reserve creating them out of thin air.  There'll be no economic activity underlying them to justify their non-existent "value".  It'll be pure inflationary pressure - and we can't sustain that, on top of the existing accretion of unrepayable debt already laid on our backs.

We, as a nation, simply can't afford this.  It'll bankrupt us.  (Of course, that may be the whole point - see the Cloward-Piven strategy.)

On the China point, there is a challenging article at Zerohedge by Tom Luongo

Not sure i agree but it passes the laugh test. In a nutshell, he argues that China, like Russia, is another boogeyman largely created by ____ to both control us with fear and to start an American-Sino war. Who is ___? Luongo attempts to follow the money/benefits and concludes it's the EU, Davos, Soros, WEF cabal that is hoping to take down the US and China as a way to grab the wealth and power.

It does explain some contrary data that points away from China. For example, how does China benefit from a bankrupt and ruined US? They need us buying as much if their ###! as possible. Why is Fauci being thrown under the bus suddenly? That doesn't help the CCP. Just the opposite.

China is our enemy. By their declaration, not ours. We deny or ignore that fact at our peril. Why do the socialists want to make the rules for everyone ? Beats me, but it is true and we can either give in to them or fight. I prefer to fight.

Channeling a laconic reply, I refer to your last paragraph.