It's long been understood that the way one looks at something helps to determine one's response to it.  It's like the famous example of a glass of water, filled halfway to capacity.  A pessimist will say it's half empty;  an optimist will say it's half full.  They're both right, but their reaction - and what they do, predicated upon that reaction - may differ dramatically, based on how they see the condition of that glass carrying forward into the future (for example, possible drought or possible flood, and all their implications).

The same applies to our financial situation, and the prospects for higher inflation (which is already with us, and getting worse almost literally by the day).  We've discussed it in many articles this year, but there are still readers out there who think it's a storm in a teacup;  that it's "transitory" (to quote the Fed's useless verbiage) and will die down of its own accord.

They haven't taken a look at that half-full glass of water, and its possible implications.  To look at just the current state of the glass is one thing.  To look at how it got that way - how quickly it was half-filled (or half-emptied), and why - is entirely another, and might change our perspective on it.  What happens if we look at inflation the same way?  We've already seen that it's essentially a monetary supply problem.  The more money there is in circulation, chasing approximately the same number of assets or needs, the more expensive those assets and needs will get;  or, in other words, the less each individual unit of money in circulation will be worth.

Look at this chart from the Federal Reserve, showing the growth in the M2 monetary supply (defined at the link) since 1960.  Click this and other images for a larger view.

That shows money supply growth in a nicely averaged, year-on-year representation.  However, what about the percentage change in money supply each year?  In other words, how rapidly did money supply growth change from year to year?  The velocity (speed) of the change will illustrate how orderly (or otherwise) the situation was (or is).

Guess what?  It's not orderly any more;  in fact, it's so disorderly it appears out of control over the past couple of years. 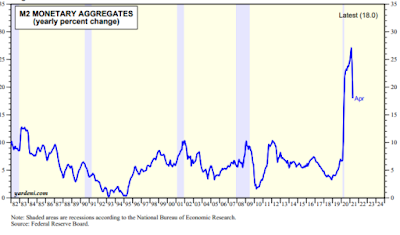 We don’t know for certain if inflation will stick and move higher or lower but as betting folk we are taking the over, however.

We do know the major global central banks have pumped in a ****load of high-powered money into the global financial system over the past year — as in around $10 trillion, close [to a] 50 percent increase of their collective balance sheets.

It’s not a question whether the Fed has the tools to reign it in, it’s do they have the 'nads?  Given the multiple asset bubbles that would burst, and burst spectacularly, if the Fed draws its sword, we seriously doubt it.

[The chart immediately above] also illustrates not only has the digital printing press been working overtime, the credit system is just fine and dandy as deposits are expanding ... Note, these are monetary aggregates, which include cash in circulation, bank deposits among near money and other short-term time deposits, not the expansion of the Fed’s balance sheet, though it does hugely influence the data.

Big spurts from the digital printing press without a credit crisis and an impaired financial system — as was the case after the Great Financial Crisis — will almost always generate inflationary pressures.  Stimulating demand without production during a supply shock is not optimal unless carefully targeted to those who need it most.

It’s very amusing to us to see the FinTweets, "peak inflation has arrived."  True, if the financial markets crash.  But what do they base their conclusion on?  A warm feeling in their tummy?

We are trying to give context to the inflation data of how loose and accommodative financial market and monetary conditions are currently [at] the highest level since November 1990, which was in the middle of the first Gulf war, where the Fed was facing spiking inflation due to the run-up in oil and a recession.

Prior to that our adjusted inflation index hasn’t been so high since the high inflation late 1970's and early '80s.  Gulp.

Inflation is always and everywhere a monetary phenomenon in the sense that it is and can be produced only by a more rapid increase in the quantity of money than in output. – Milton Friedman

Inflation is way too high given extremely easy financial and monetary conditions.  There will be blood.

We've also pointed out, over the years, that the US national debt is so crazily high that it can never be repaid under normal circumstances.  Our economy simply can't produce enough goods and services (providing the tax base for our government to repay the debt) to do that.  However, if our currency is debased, so that one dollar today is worth (say) ten cents of the purchasing power it used to have just a few years ago (in other words, inflation), then current inflated dollars can be used to pay off the old, high-purchasing-power debt with much less budgetary pain and suffering.  The fact that consumers (you and I) will take it in the shorts if they do that, because our money will no longer buy as much (if any) of what we need to maintain any acceptable standard of living, doesn't concern the powers that be.

We're the "little people", and they couldn't care less about us.  They're worried about the "big picture".  We must just put up and shut up, while they impoverish us in order to play their money games.  Inflation is in their best interests.  It's not in ours.

Money supply is not just a question of how many dollars are "printed". There is also a function of how often that money turns over (usually figured as "in a year". The money needs of business determines the actual value of money (in other words, inflation or deflation) - and the frequency of reuse of the dollar value of money raises or lowers the actual inflation/deflation figure.
In recent years, the turnover figure has been decreasing steadily, apparently in response to the debt load. However, the volume of creation of dollars has totally overwhelmed the decrease in turnover.
But if inflation psychology hits, then suddenly the turnover increases rapidly as people want to get rid of their dollars. This turns into hyperinflation as "need" to print dollars attempts to surpass the decreasing value (due to inflation) and so we cycling to destroy any value to money.

Save money, not dollars.
Problem solved.

"the Fed has the tools to reign it in"

As a horseman from a long line of horsemen, it drives me nuts every time I see 'reign' used in place of 'rein'. The sentence doesn't even make sense using 'reign'. The saame goes for 'free reign'.

Yes, I know you're just quoting the guy, Peter, Rant over.