Yet another official hobgoblin to frighten the citizenry

Glenn Greenwald (who famously broke the Snowden revelations about state invasion of citizen privacy) alerts us that a new pattern of government warnings to the American people signals a new politically-inspired war on terror.  This time it's directed against conservatives and Trump supporters, who are now officially lumped together and derided as "domestic extremists".  Trouble is, it's just as false and manipulative as such warnings have been in the past.

The Department of Homeland Security on Friday issued a new warning bulletin, alerting Americans that domestic extremists may well use violence on the 100th Anniversary of the Tulsa race massacre. This was at least the fourth such bulletin issued this year by Homeland Security (DHS) warning of the same danger and, thus far, none of the fears it is trying to instill into the American population has materialized.

Just like the first War on Terror, these threats are issued with virtually no specificity. They are just generalized warnings designed to put people in fear about their fellow citizens and to justify aggressive deployment of military and law enforcement officers in Washington, D.C. and throughout the country.

Fear is crucial for state authority. When the population is filled with it, they will acquiesce to virtually any power the government seeks to acquire in the name of keeping them safe. But when fear is lacking, citizens will crave liberty more than control, and that is when they question official claims and actions. When that starts to happen, when the public feels too secure, institutions of authority will reflexively find new ways to ensure they stay engulfed by fear and thus quiescent.

I saw first-hand how this dynamic functions when doing the Snowden-enabled reporting on mass domestic NSA surveillance under the Obama administration. By the time we broke the stories of mass domestic surveillance on Americans — twelve years after the 9/11 attack — fear levels over Al Qaeda in the U.S. had diminished greatly, especially after the 2011 killing of Osama bin Laden. As a result, anger over Obama's sprawling domestic surveillance programs was pervasive and bipartisan. A bill jointly sponsored by then-Rep. Justin Amash (R-MI) and Rep. John Conyers (D-MI) — which would have greatly reined in NSA domestic spying powers — was on its way to easy, bipartisan victory as a result of that anger over NSA spying. But suddenly, the Obama White House convinced Nancy Pelosi to whip enough Democratic votes to ensure its defeat and save NSA domestic spying from reform. But the momentum which that bill had — it would have been the first since 9/11 to rollback rather than expand government powers — along with anti-surveillance-and-pro-privacy polling data, proved how significantly the playing field had shifted as a result of those revelations and, especially, the reduction in fear levels experienced by Americans.

But shortly thereafter, a new group — ISIS — emerged to replace Al Qaeda. It had a two-year stint with middling success in scaring Americans, but it was sufficient to turn back the tide of pro-privacy sentiment (at one point in 2014, the U.S. intelligence community claimed out of nowhere that a Syria-based group that virtually nobody in the U.S. had ever heard of previously or since — "the Khorasan Group" — was “a more direct and imminent threat to the United States,” but that new villain disappeared as quickly as it materialized). After ISIS’s star turn in the role of existential threat, the Democrats, during the 2016 campaign, elevated Russia, Putin and the Kremlin to that role, abandoning without explanation Obama's eight-year argument that Russia was merely a regional power of no threat to the U.S. This revolving carousel of scary villains ensured that the pressure to reduce the powers and secrecy of the U.S. security state eroded in the name of staying safe.

Before Joe Biden was even inaugurated, he and his allies knew they needed a new villain ... While negative views of Russia increased in the U.S. during Russiagate mania, few outside of hard-core Democratic partisans viewed that country as a genuine threat or primary enemy. Few Americans woke up shaking in fear about what the Kremlin might do to them.

The search for a new enemy around which the Biden administration could coalesce and in whose name they could keep fear levels high was quickly settled. Cast in that role would be right-wing domestic extremists.

Beyond the DHS bulletins, that agency and other intelligence operatives continue to issue reports, for both public and classified consumption, warning that the greatest national security threat the U.S now faces is domestic extremism. As we reported here last month, that "domestic extremist” designation includes not just anti-Biden and anti-government protesters on the right but also leftist groups including animal rights activists — essentially anyone who objects to prevailing ruling class dogma and wants to use their constitutional rights to advance those views. To compile these reports, the CIA appears clearly to be breaking the law in using its vast intelligence weapons for domestic monitoring and control.

Online censorship, of course, is also rapidly increasing in the name of stopping the threat of domestic extremism.

These are all the same weapons as the ones invoked for the first War on Terror. Yet what is perhaps most notable about comparing this new domestic War on Terror to the first one is not the common weapons invoked to fight it but rather how identical are the rhetorical strategies used to demand submission to it.

No nuance or questioning is permitted when it comes to discussions of how much danger America really faces from domestic extremists. The parallels with the first War on Terror are manifest.

Opposing this new domestic War on Terror and all those new powers and secrecy authorities that go with it does not require support for or even indifference toward what happened at the Capitol on January 6. It merely requires a basic knowledge of recent U.S. history and how these powers are invariably used by the secretive U.S. security state when government-generated fears lead to their widespread enactment. The dangers of the first War on Terror were grave enough. Transferring it to "the Homeland,” as President Biden calls it, is bound to be far more dangerous still.

In case some readers have forgotten, I remind you that Glenn Greenwald is a left-wing journalist, not a right-wing conspiracy theorist.  He just happens to be an honest journalist, and will investigate any story without fear, favor or bias - something sadly lacking in all too many of his contemporaries.  I wish there were more like him.

A century or so ago, H. L. Mencken warned: 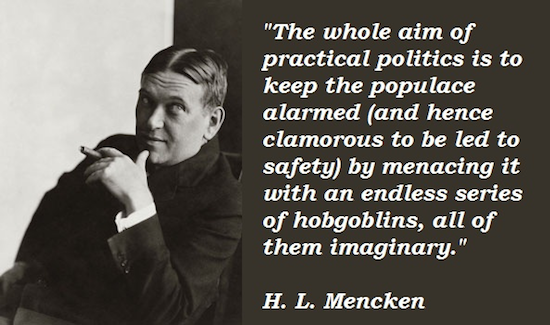 Yet again, the Sage of Baltimore's warning proves prescient.

Never forget that the entire Biden administration is illegitimate.  It is beyond statistical doubt that the November 2020 elections were stolen by unprecedented levels of electoral fraud - possibly perpetrated and/or aided and/or abetted in many cases by the same organs and employees of the administrative state that are now trying to frighten us into line, and stop us questioning their authority.  Their reason for trying to frighten us is simple:  to discredit any challenge to the legitimacy of the Biden administration.  Those who've stolen power intend to hold onto it, no matter what.  Furthermore, they know that if they're exposed and lose power, they'll be called to account for their crimes - and they have no intention of allowing that to happen.

These warnings against "domestic extremists" are nothing more or less than an attempt to manufacture an excuse to crack down on opposition to the Biden administration and its policies.  Let's recognize them for what they are, and treat them - and their originators, distributors, cronies and lickspittle lapdogs - with the contempt they deserve.

It's all a matter of perspective:

If you are a government of vampires holding millions of people in thrall as cattle, the hunters carrying crosses, mallets and stakes are absolutely domestic terrorists.

I've never been in Tulsa, but I did have about half a year in Lawton. Small town. Quiet. But the wind blew in a Draft notice...so I signed up with the USAF.

I would venture that the Deep State people see it as their right to do all they do, and also a genuine necessity. The benighted, unwashed, non-elite rubes of flyover America are just not really capable of self government in the last on e hundred years or so. 'I mean, those people didn't even go to an elite university!' Or understand that 'nations are so obsolete these days! We all live in a new world now, and of course we believe in the Constitution! It's framed on the wall of my summer cottage, with all my legacy L.L. Bean' cottage furniture, next to my parents' Norman Rockwell prints! But we can't really live that way any more!'

Can anyone out there tell me exactly (or approximately) WHAT QAnon really is? Other than a bugaboo of the Left???? All I get is "The monsters are coming! THE MONSTERS ARE COMING!!!!!111111!!!!!AAAAAAIIIIIiiiiiiiieeeeeeeeeeeeeeeeeee!!!"

Wiki actually does a decent job of breaking it down...

QAnon[a] (/ˌkjuːəˈnɒn/), or simply Q, is a discredited American far-right conspiracy theory alleging that a cabal of Satanic,[1] cannibalistic pedophiles run a global child sex trafficking ring and conspired against former President Donald Trump during his term in office.[2][3][4][5] QAnon is commonly described as a cult.[6][7][8]

Anyone who goes to Wikipedia for an explanation is asking to be misled.

It would never have occurred to me to think of the anniversary of Tulsa 1921 as the kind of memorable date on which to carry out such activities with any kind of psychological impact on anyone except history nerds. Am I wrong? Of course, it's also true that I wasn't studied up at all on the original event until a few days ago, so maybe I am missing something.

In other words, this will be a bad time to have to defend yourself from the Burn Loot Murder crowds.
John in Indy

Comments from the riot-age crowd:
"Where's Tulsa?"
"Tulsa existed a century ago?"
"Did something happen there?"

“ Furthermore, they know that if they're exposed and lose power, they'll be called to account for their crimes.”

Unknown, I've looked at Wikipedia for it, and it seems to be all bafflegab to me. My Magic 8-Ball tells me, "This is CLASSIC bafflegab, and you can tell them I told you so.

Anyone consider that the warnings and identifiers are correct? They are just premature and ENTIRELY from the point of view of the existing power structure. After all, there is lotsa talk on the right about when the revolution comes, when the shooting starts, the inevitability of a civil war, etc.

WE will be the insurgents. We will be the terrorists blowing up government officials, etc. We think of ourselves as the good guys but everyone does. .Gov definitely will think of us as the bad guys, and they will shape the narrative that way with all the resources at their disposal.

Get used to the idea. The rules have changed. The right is going to fill that role, so it's time to get our heads around that.