Today we have something absolutely delightful for fans of pre-baroque and early Western music.  It's an album by French ensemble Alla Francesca titled "Festive Music for the Visconti Court, 14th Century". 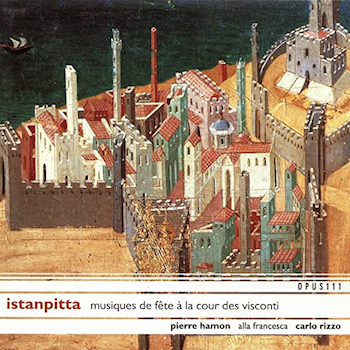 The term "Istanpitta" is an Italian word (French:  estampie) described by Wikipedia as meaning "a medieval dance and musical form which was a popular instrumental and vocal form in the 13th and 14th centuries".  (A US music ensemble is named for it;  we may be hearing from them in these pages in due course.)

I can offer no better introduction to this music than a review on Amazon.com by customer "Sator".  I've added a few links of historical interest.

Istanpitta is a word related to the English word stomping or stamping. The reference is to the fact that the forms here are dance forms, though like those in Baroque dance suites, these were also not intended to be danced to. It has been surmised that the pieces here (originating from a manuscript found in the British Library) could have been connected to the marriage of Isabella of France and Gian Geleazzo Visconti in 1360. The manuscript eventually found its way into the collection of the Medici family in around 1420.

Alla Francesca was founded in 1989 from members of Ensemble Gilles Binchois and is based at the Centre de Musique Médiévale de Paris. They are a group with some following in France and definitely deserve to be even better known internationally than they are. They have already won a Diapason d'Or prize for a recording in 2000. If you look at the Amazon France site they have a listing of CD's recommended by Diapason (the French equivalent of Fanfare or Gramophone) and it is very noticeable how prominent Alla Francesca recordings feature on this list. They are an ensemble that differs from their English colleagues for a much warmer, more spontaneous and expressive sound of immense appeal. In fact the English ensembles tend to sound a bit chilly and academic by comparison to this.

The performances here enjoy a delightfully wide palette of instrumental colour and are brought off with much charm and elan. The music here is all highly appealling listening and even if they are less than earth-shakingly profound works, they remain immensely enjoyable to listen to. The instruments include a variety of woodwind, percussion, Gothic harp, and luth.

Classicstoday gave this a rave review and a 10/10 rating for the artistry and recorded sound quality.

I like the German group Estampie who play at Cons and Renaissance Festivals. Their Signum album sung in Old High German or Middle French has some lively tunes til you read the English translation and they all deal with the fragility of life and the certainty of death during the days of the Black Plague.

This is lovely BRM. Thank you for sharing!

Thanks very much for this and the Instrucción de Música sobre la Guitarra Española a coupla weeks ago. I bought the CD.