Sometimes the jokes write themselves...

I did a double-take when I saw this advertisement.  Click the image for a larger view. 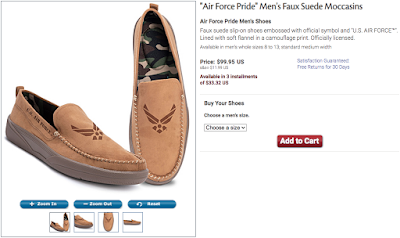 For a start, the caption "Air Force Pride" is, to say the least, problematic.  Remember, back in the day, being gay (i.e. homosexual) was referred to by some as being "light in the loafers".  To actually market loafers under the "Pride" label, with its current connotations (as in "Gay Pride", etc.) appears, in so many words, to be inviting their wearers to self-identify with the latter trend.  That's made worse by the wording of the blurb accompanying the advertisement.

Each moccasin is lined with ultra-soft flannel in a camouflage print and features whip stitching around the top panel ... What a wonderful way to put your best foot forward and show your Air Force spirit!

I asked an Air Force friend, a senior NCO, what he thought about the wording of that advertisement.  After a moment's stunned silence, he said firmly (even emphatically), "No.  Just... NO!!!"  He may have emphasized that with a few well(?)-chosen adjectives.

I suspect many of his colleagues will feel the same - particularly when they consider what the other branches of the Armed Forces, particularly the Marines, might have to say about it, using an even more scatological selection of adjectives.

(Interestingly, I notice the vendor offers a similar product for the Army and the Navy, but not for the Marines or Coast Guard.  Discrimination?  Or discretion being the better part of valor?)

I kinda want to get a pair for my FiL (retired AirForce), but not a $100. As a retired Baptist preacher as well, I doubt his expletives would be as colorful as they would have been back when he was in the AF but it would still be an interesting day upon opening such a gift.

You would have to be a "REAL" man to rock a pair of those.

It is time that we started taking bak our English language. As an example, I never use the word "gay" for a homosexual, I say F#cking faggot. Pride ? In connection with homos, it should be "shame". I am old school. Plus, I believe in the First Amendment when it comes to free speech. Disagree ? Change my mind.
Cool shoes, though.

The propper thing to do would have been to send your Air Force frient a pair of those. The reaction would likely be even more spectacular!

As a retired Master Sargent, Hell to the NO! There is so much wrong with this all the way around, including the timing.

Gotta send a pair to OldAFSarge over at Chant du Depart. Priceless...

Having retired from the AF as a Major, with 17 years in the missile biz, and 8 of them in 33 holes in the ground, I wouldn't be caught dead wearing those, let alone being caught live wearing them. Bunny slippers, now....maybe.

does the label say "Made in China"

Its the Bradford Exchange. They're famous for over-priced, incredibly tacky items. And yeah, probably made in China. Barf!

Ya, we should really worry about this. Trumps stimulus hasn’t been spent. Biden wants to outdo Trumps stimulus. We got Russia saying adios to USD. Let’s talk about slippers. Cause we’re real men.

I wouldn't give 5 bucks for that crap.