Independent journalist Michael Yon has weighed in on the controversy surrounding Chairman of the Joint Chiefs of Staff, General Mark Milley, who has come out in support of so-called critical race theory.  It's perhaps worth noting that Mr. Yon is near-idolized by some sectors of US military opinion (particularly those actually doing the fighting rather than REMF's, fobbits and the like).

For folks who may have missed it, the quality of US military officers is plummeting. The Navy can hardly sail without crashing. One officer, at her trial for her involvement in crashing a fighting ship, broke down and cried. It's fallen that low. Crying is a defense.

While China grows. And Russia plots.

We watched the military become a logical career path for folks who want sex-change on demand at taxpayer expense. Where were the icons such as Mattis?

Many folks who do not know the difference between combat and infantry manage to think their opinions are equal to those who have spent years in combat, with infantry. These are the same folks, in my experience, who push Critical 'Racist' Theory.

The masses who push the new Naziism do so in the way that all herds stampede. Just cattle. But the ringleaders are bringing about destruction of the United States.

Godwin's Law is an illumination that nearly all heated arguments -- if they run course long enough -- will end up with accusations or evocations of Nazism. The vast majority of Nazi comparisons are wildly -- well, wrong.

But there is a meritorious 1%.

Critical Race Theory is [a] direct echo of Nazi ideas.

And not in a minor way.

Those who study information war, and have studied previous and current genocides, can see that caucasians are being set up for genocide in Europe and in North America. And Asian Americans next on the menu.

General Milley has become a useful tool. In a very powerful position. And he is not the only one.

To be fair, I know people who know Milley well, and people who have served under Milley at various stages of his career. According to officers and NCOs I trust, there was a time when Milley was a good officer.

But today, Milley serves in the dark forces which undermine our country and our way of life. Milley sucks up to, and placates, those who wish to destroy him. Milley alienates his natural allies -- people like me -- who he works to destroy.

This man, by his own words and actions, is behaving as an enemy of freedom and all that our ancestors have fought for.

Strong words:  but I've heard them echoed a great deal over the past few days by current and former US military personnel whose judgment I trust and whose opinions I value.

Tucker Carlson had more to say about Gen. Milley and Critical Race Theory.  A video of his remarks is available here, plus a transcript if you prefer to read rather than listen.  Like Mr. Yon, Mr. Carlson appears to be highly regarded by fighting military men (as opposed to those who've fought as little as possible).  Here's an excerpt.

Mark Milley is the chairman of the Joint Chiefs of Staff. He didn’t get the job because he’s brilliant, or brave, or because the people who know him respect him. He isn’t and they definitely don’t. Milley got the job because he’s obsequious. He knows who to suck up to, and he’s happy to do it. Feed him a script and he’ll read it. Yesterday, the man in charge of the nation’s weapons, explaining that he’s working to understand a concept called "White rage:"

It's hard to believe that man wears a uniform. He’s that unimpressive. Notice he never defined White rage, and we should know what it is. What is White rage? Well, ... it’s one of those diseases that only affect people with certain melanin levels. It’s a race-specific illness. That’s what Mark Milley has learned from reading about it. That’s why he’s making his soldiers read about it too. They need to know.

MILLEY: I’ve read Mao Zedong. I've read Karl Marx. I've read Lenin. That doesn't make me a communist. So what is wrong with understanding, having some situational understanding about the country for which we are here to defend? And I personally find it offensive that we are accusing the United States military, our general officers, our commissioned, our noncommissioned officers, of being "woke."

And by the way, if it’s a medical condition, at what age can you catch White rage? Most of us assumed our two-year-olds were just teething. Now we know it’s their whiteness that’s making them so angry. Thanks, Mark Milley. We appreciate your contribution to our generation’s scientific racism. By the way, have you read anything about winning wars recently? Apparently not.

With leadership like Gen. Milley's, it's no wonder that West Point and other military institutions of learning appear to have gone 'woke' without anyone noticing until it was too late.  Remember the infamous Second Lieutenant Spenser Rapone? 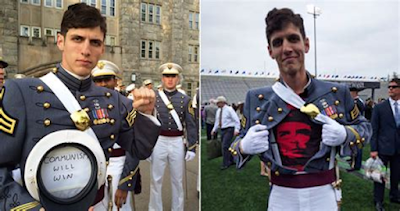 All Rapone did was make blatant and public the sort of attitude that Gen. Milley is trying (unsuccessfully) to conceal behind a top brass fig-leaf.  Worse, the professors and teachers at West Point who indoctrinated, aided and abetted him are still there.  The place is 'woker' than ever, according to accounts I've heard.  Consider how they're treating cadets who've rejected COVID-19 vaccinations.

Food for thought.  I'm sure our actual and potential enemies and rivals are doing precisely that . . . and rubbing their hands in glee at the prospect.

I think I now understand why two of my kids, one army and one USMC, both NCOs, decided recently not to re-up.

The main enemies we face are domestic with China , their close ally in second place.

He has three Bronze stars, none with the V for valour, and the Combat Infantry Badge, but no Purple Heart? Career staff puke.

And we have obama and those like him to thank for the destruction of our military.
Frustrating and a bit heartbreaking.

That turd Rapone ended up with a cushy job at UT Austin, turns out.

I was inspired to meme this (someone else did the image, I did the words)

@ Well Seasoned Fool - I found this analysis of the fruit salad interesting: https://bigcountryexpatoriginal.blogspot.com/2021/06/another-full-day-and-general-milley.html

In positive news (from 3 years ago): "10th Mountain Division accepted his (Spencer Rapone) resignation Monday after an earlier warning for “conduct unbecoming of an officer.” He’s leaving the military with an other-than-honorable discharge."

1930s Spain. The collectivists are trying to get it right in America this time. In Spain, the Popular Front came to power and started purging the military with a vengeance while also pushing radical domestic policies. Military officers who opposed this transformation of Spain rebelled and sought to overthrow the government. Yes, Gen. Franco rose to the top but it wasn't a fascist uprising. It was mainly an anti-communist one that admittedly took all the aid it could get from Mussolini and later Hitler in the war against the Popular Front. (Lest we judge, consider the monster Stalin we aided and allied with against Germany in WW2).

At any rate, there are strong echoes here now. Without oversimplifying we can at least say that there is some sort of coalition of powers and interests who share a collectivist ideology bent on imposing their system on the US, just as the Popular Front did in Spain. I suspect that the current Regime is madly purging patriots from the military, not so much to use it against us as to ensure that it is not used against them as in Spain. That is what the Capitol occupation in DC was all about-- a genuine fear by the Regime that the military might attempt to stop the coup from taking power. NG troops were considered a benign insurance policy against any quick move by Special forces as well as good political theater to underscore the threat posed by Trumpistas.

Note, too, how the Regime is using the same Popular Front strategy of painting political opponents as dangerous vermin who must be eradicated. How else to explain the jailing of January 6th protesters for months without trial and the orchestrated vitriol against any who dare question the narrative?

Best guess of how this goes down: the Regime will invite or otherwise precipitate a new Crisis to serve as justification for even more draconian measures against patriots. It could be a financial currency meltdown or a war with China and or Russia. It could be another bioweapon. Whatever it is will be exploited to further cement their grip on power. It will be abundantly clear at that point that elections are irrelevant and only raw power will matter. (My further guess is that this happens before 2022 mid terms as the Regime seems in a hurry to implement their schemes, implying that they have no intention of allowing themselves to be voted out in 2022. Viewed in this light, 2020 was their all or nothing gamble where they risked putting all of their fraud in full view knowing they would never face elections again if successful).

As others have remarked, we don't vote our way out of this. It's doubtful the Regime can purge enough patriots from the military in time to prevent a split where, I'd guess, some military bases will balk at Regime orders and choose sides while others try to be neutral while others will go full Regime. The military will have to choose at some point. Not choosing is choosing.

At that point, if we follow the Spanish trajectory it gets ugly. It's easy to see the Regime getting foreign support from China and the EU. Who would back patriots? I don't see any Lafayette out there. On the other hand it's a big country and keeping Blue cities fed and powered would be a challenge for them even with outside aid.

A final echo of the Spanish civil war is the dire division of people. When an area fell under Popular Front control, anyone known or suspected of rebel sympathies was summarily executed. Same when areas came under rebel control with mass executions. Lesson being, don't be caught in an area likely to be under Regime occupation.

Apology. In a comment above, I called him a career staff puke. That remark was not directed to those who served honorably and well making certain the tip of the spear was supported. Not everyone can serve at the tip of the spear. Physical limitations may be a major reason; not a lack of courage. A staff puke, in my mind, is the manipulator who keeps himself/herself from harms way while appearing to be the brave warrior and accepting, even seeking, the accolades given those who were at the tip. I loath them.

+1for this. I use the hot extract scene from Act Of Valor to explain this to my children.

Cool machine gun, right?
Someone has to maintain those.
Someone writes manuals to train the maintainers.
Someone runs the manual publishing organization.
And so forth.

It is a long spear, and I am way far at the back. But I am still pushing…