Electoral ducking and covering... why am I not surprised?

I note the following announcement from Colorado's Secretary of State.

“Colorado’s elections are considered the safest in the nation, and we must remain steadfast in our dedication to security,” said Secretary of State Jena Griswold. “Along those lines, no third-party person or vendor will be permitted access to voting equipment in our state. We will not risk the state’s election security nor perpetuate The Big Lie. Sham audits have no place in Colorado.”

A third-party vendor with no election experience is currently performing a faulty, unsecure election audit in Arizona and calls for such sham audits have been spreading in other states. Several Colorado counties have been contacted by third parties offering to conduct audits.Colorado already administers post-election Risk Limiting Audits after every statewide election, which gives a statistical level of confidence that the outcome of an election is correct.

There's more at the link (if you want to waste your time reading such drivel).

So Colorado joins the many other "blue states" that are desperately trying to prevent a free, fair, open and unbiased analysis of last November's election, in an attempt to uncover the shenanigans that undoubtedly took place.  (The statistical evidence alone is more than convincing enough to prove that, let alone the physical and other evidence already uncovered in Arizona, Georgia and Michigan by such audits.)

Rule of thumb:  if someone wants to prevent light being shed on a subject, they have ulterior motives.  Light is a useful sterilizer.  It reveals reality, and destroys the lie.  Or, as one Gab user put it: 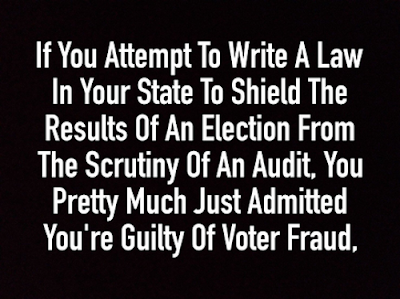 I couldn't have said it better myself.

(Oh - and speaking of electoral shenanigans, did you notice this report out of California?  Looks like LA County's Soros-funded DA may not have been validly elected after all - yet he's the one who is primarily responsible for investigating electoral fraud in that county.  Ain't we got fun?)

This is not a good look for that "fair and free" election:

As Aesop is wont to say: "Those who know they won don't mind seeing the instant replay on the Jumbotron".

For those like us who believe the election was stolen, no more proof is required - though things like the above are useful as corroborating evidence.

For those unlike us who think suitcases full of ballots pulled from under tables and run multiple times "have been explained and all is OK" no proof will ever be sufficient.

Sh'yeah, right. As if. When monkeys fly outta my butt.

I need to figure out a version with "You keep using those words..."

Ask, and ye shall receive...