We've spoken about how public school systems in the USA are increasingly being taken over by political correctness and extremism, to the point where so-called critical race theory is becoming dominant in many of them.  What's more, many school systems are openly hostile to those who disagree with this, to the point of deliberately excluding them from proceedings, mocking them, and discriminating against their children because of their parents' opinions.  For the most recent horror story of that sort, from Washington state, see here.  If it doesn't make your blood boil, there may be something wrong with you.

I came across the following post on Gab recently.  I can't link to the post directly, because the account is private and doesn't allow that, but I think the general thrust of the argument is unarguable.  Click the screenshot for a larger view. 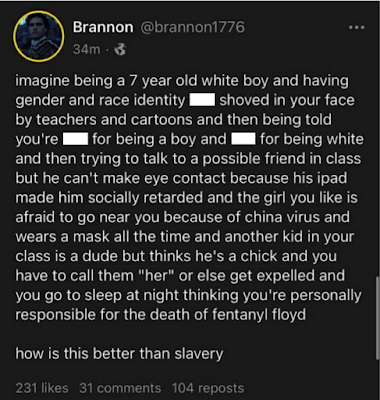 Based on my knowledge of many faith-based schools, and information coming from many educators, and news reports like the one linked above, I think the kids' nightmare outlined in that post is an accurate description of what's going on in all too many public school systems today.

The question thus arises:  why would any normal parent put their kids through that nightmare?  Would you willingly send your child into a brainwashing program guaranteed to warp, twist, fold, spindle and mutilate their innocent minds into a ghastly caricature of a normal human being?  If not, how can you in good conscience send them to public schools riddled with critical race theory and political correctness?

It's time for parents to take over their school systems, throw out the nonsense that's infesting them, and get back to the "three R's" of education as a foundation for everything else.  Also, let's include such foundational elements as civics (in the classical sense), logic and literature.  They used to be universal in the American education system;  now, they're largely conspicuous by their absence.  Fortunately, there are signs that parents in at least some areas have had enough of the nonsense, and are mobilizing to do precisely that.  See, for example, Vail, Arizona last month.

If parents are in a situation where there's no hope of doing that, I submit that it becomes a moral and ethical choice to remove their children from that sick, twisted environment, and educate them at home and/or with the kids of like-minded parents who also recognize what's happening, so that their offspring have at least a chance at a normal life.

I think it's become an either-or situation:  either parents take back control of their community's schools, and fix them, or they withdraw their children from them.  There can't be a "middle of the road" approach to such evil incarnate.

I was right with him until the "Fentanyl Floyd" crack. Felon Chauvin is responsible for Floyd's death, even if the trial was a travesty.

@Wayne: Yes, Chauvin was responsible; but if Floyd hadn't OD'ed on fentanyl before the incident, Chauvin's submission hold wouldn't have caused his death. That's undeniable - read the autopsy.

I taught Middle and High School for 27 years. I witnessed first hand the decay and collapse of the school system. My last year in the classroom was 2019. It was made abundantly clear that no one could discuss race, Christianity or Natural Law without causing a great deal of trouble. Students, some of whom were quite intelligent, mostly bought in to the whole 'woke' agenda, memorizing all the "new" genders and pronouns. I was informed by a school board member
in mid-2019 that what I had said in my History class would get me terminated and legal action would be taken. What were those terrifying words? "Men and women are different." I retired at the end of that term and have not experienced such contentment in years.

And this happened in a charter school in Oklahoma City.

Civics would be a tough sell.
I doubt the "teachers" understand the subject well enough to repeat a syllabus.

it's a crying shame

It's almost as if the wounds of Western Civilization are beginning to rot. I fear the only way to heal the body is to cut off the rotten parts. Also, not "public schools", but more accurately "government schools".

There's a movement going on among the academics that indoctrinate the teachers to attack home schooling and get it banned.

I bet this is why. Homeschooling has produced better results than government schools and they have to fight it.

There simply aren't enough chairs in the parochial schools to accommodate the numbers that could be coming.

I'm surprised we haven't already seen more attacks on home schooling - liberals want to be able to control everybody.
Fortunately, groups like the HSLDA have been proactive in getting it allowed and taking the fight to anybody who attempts to limit home schooling. As far as I understand, there is a significant body of court wins protecting home schooling; those who oppose it have an uphill fight.

Requiring children to wear masks is child abuse, period. They don't get or pass COVID - requiring them to obey restrictions that were already irrational is wrong!

Watch the trial, or read the Legal Insurrection synopsis.

I've seen autopsy results much like George's. Dude was dead no matter what. Dead by bad heart due to drugs, drugs, and, um, drugs (all of the not-legally prescribed style) along with other unhealthy lifestyle choices.

Lots of people say to me, surely the pendulum will swing back. People are waking up, right?

Sometimes, when pendulums swing too far, they become wrecking balls. There's nothing left to salvage.

Someone reached out to me about the board chair of one of the schools I've been writing about recently, telling me she's a "perfectly lovely person." I'm sure she is, most of them are, but "perfectly lovely people" are presiding over the collapse of our culture.

The road to hell is paved with good intentions, as they say.

https://thenakeddollar.blogspot.com/: What i get is, don't EVER even THINK of dating an Andover girl; you'll regret it.

I went to my state U. and never went out on a date, or IN with a date. But that's just me; I had an older sister who pretty much disabused me of even thinking of dating.

" Of all tyrannies, a tyranny sincerely exercised for the good of its victims may be the most oppressive.
It would be better to live under robber barons than under omnipotent moral busybodies.
The robber baron's cruelty may sometimes sleep, his cupidity may at some point be satiated; but those who torment us for our own good will torment us without end for they do so with the approval of their own conscience. "

People really need to consider homeschooling. In reality, it only requires a couple of hours a day. Most of the day at public schools are wasted on other things than teaching.
There are a lot of resources available that allow you to give a child a good education, even in subjects that you know little, or nothing, about.
We homeschooled both of our children, and they both performed well in college, and now in their jobs.

I forgot to credit C. S. Lewis for the above quote.

Remove the "some" and we're in complete agreement. Public school is child abuse and neglect, full stop.