Don't mess with a Cape buffalo!

There are those who think that American bison - wrongly called "buffalo" by many - are tough, pugnacious critters.  Allow me to assure you, they have nothing on real buffalo, particularly the Cape buffalo of Africa.  The latter have killed an awful lot of hunters, and left many more wishing they were dead - not to mention demonstrating forcibly to many other denizens of the animal kingdom that it's unwise to tangle with them.

I was reminded of them - and highly amused - by this photograph sent to me by Lawdog, who's an old African hand like myself.  He and I have both encountered vocal disbelief - from those who don't know any better, or are used to Disney cartoon portrayals of wildlife - that mere "wild cows" can be so dangerous.  (See his Africa stories to be disabused of that notion.)

I'll let the picture speak for itself.  It's clearly a photoshopped version from a video clip (which I'll include below), replacing another animal with a crocodile, but it's still amusing.  Click it for a larger view. 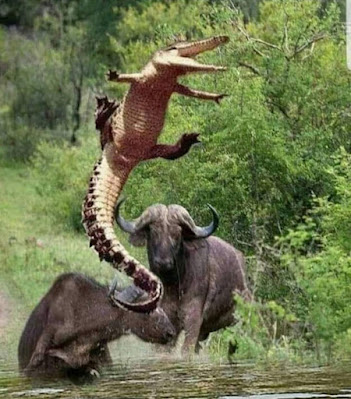 I bet, if that crocodile could talk in between screams of terror, it wouldn't be arguing about who's top dog in that river!

In case you think that's unusual, it's not uncommon to see that sort of thing in Africa.  Consider this lion who, along with a buddy, didn't make sure that their intended prey - who looks to have been either young, or sick and unable to defend itself properly - was alone.

"They're just wild cows!"  Yeah.  Right.  Depending on the extent of his injuries, that lion might not have survived that encounter for long.  (Also, note the background to that video clip:  it's clearly the source for the photoshopped photograph above.)

The late Peter Hathaway Capstick, whom I had the privilege of knowing when he lived in Cape Town, wrote many books about Africa.  His first, which cemented his reputation as a world-class raconteur, was "Death in the Long Grass". 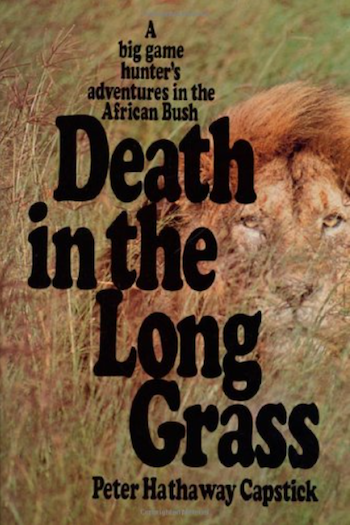 In that book, he had this to say.

The African Cape buffalo, Syncerus caffer (not "water buffalo", NBC), has enjoyed a Jack the Ripper reputation since the first European thwacked one with a muzzle loader more than 300 years ago.  He has always been considered a top contender as the Dangerous Continent's most dangerous animal, and there is no question that the sheer physical characteristics of Mbogo, Njati, Inyati, or Narri, depending upon what dialect you hunt him in, give him a very unique package of aggregate attributes that in their total are unequalled by any other member of the "Big Five":  lion, leopard, elephant, or rhino.

The most impressive fact about the buffalo is that he has virtually no weak points.  Jumbo and rhino are myopic in the extreme, but a bull buffalo could read the want ads in dim light across Times Square.  The talent of his big, scruffy, thorn-torn ears is incredible, fully the equal of both lion and leopard, either of which he outweighs many times at no apparent cost in blinding speed and maneuverability.  His sense of smell is practically supernatural when he sticks that big, black nose like a #10 jam tin into the wind - as good as elephant or rhino and much better in ambient air than any of the cats.  He is a living arsenal of weaponry for use against jerkwater hunters or preoccupied Africans, offering a Chinese menu choice on your shortcut to Glory of horns that can disembowel a locomotive, hooves like split mattock-heads, and up to a ton of bulk that can roll you into a fair resemblance of shaggy tollhouse cookie mix.  What's more, if you cross him and get caught, he will display a singular lack of reluctance, regardless of race, color or creed, to give you a nice, home demonstration of his talents.  If you are planning on hunting the mighty buff, you had best give some thought to putting your affairs in order.  In the thick stuff, where he loves to loaf away the fly-filled, hot afternoons, he has the edge, not you.

The "Run, Bambi, it's Man" and "Don't Shoot Him Mister He's a Sheepdog" mentalities rarely waste their time in the thick bush of a hunting concession when they can sit in a zebra-striped minibus at a game preserve and photograph buff that are used to people.  They will tell you that they've photographed thousands of buffalo without any incident whatever, and I'm sure they have.  What they don't realize is that park buffalo behave entirely differently than "wild" ones, acting more like dairy cattle than anything else, drinking and grazing in daylight, while normal buff hide up in heavy cover during daylight and only come to water at night.  When I say heavy cover, I refer to thorn and scrub thatched with grass until the end result is thicker than boiler plate, and about as translucent.  To spend a few days tiptoeing around this vegetable morass looking for a good bull at tag-you're-it distance is possibly the most tense, nerve-wracking hunting in the world.  The first thing you will notice in this pastime is the absence of lady photographers in fake leopard hatbands.

Although it's true that adrenaline and other high-performance additives are a factor with any large animal when wounded or excited, the Cape buffalo is clearly the champ in the overdrive department.  If you don't drop him stone dead or mortally wounded with the first shot, he will completely lose his sense of humor and may get the idea he's invulnerable to bullets, a point he may prove to you over the next few minutes ... You can shoot him practically to pieces, if he gives you the chance, but he'll keep coming despite wounds that would disable a tyrannosaurus.  Blow his heart into tatters, literally, and he'll have enough oxygen stored in his brain to go a hundred yards and still have the moxie to take you apart with his tent-peg horns and mix you up with enough topsoil to start a modest tomato farm.

A buffalo whose attention you have gotten with a badly placed shot is really something to behold.  For sheer, unnerving ferocity, he will make a range bull look like Ferdinand.  When he has you nicely in range and comes galumphing over to chastise you, he keeps his head very high until a few inches before contact - probably so he can watch your expression - making it about as easy to slip a bullet through the armor of his horns into the brain as to complete a triple carom shot on a warped pool table after seven martinis.  Either you stick a big slug up his nose and hopefully catch his brain or upper vertebrae, or remember the words to the "Hail Mary" in a hurry.

Capstick wasn't exaggerating.  I've shot three Cape buffalo, all of them older specimens taken for meat, not as trophies;  and I made good and sure to shoot them from at least a hundred yards away, downwind of them, where they wouldn't scent my approach.  If I couldn't get a good, solid killing shot at a buff, clearly and without obstructions, I didn't shoot at all.  I had - and have - no desire whatsoever to have a wounded buff take out his frustrations on me.  There are more than enough graves in Africa with suitable epitaphs to teach us that far too often, under such circumstances, they win.

They win even as they are dieing. Not something I would want to tangle with

Jeff Cooper had a lot to say on the topic of African Buffalo, and was clear that once one decided to kill you, nothing would stop it except it’s own death. Buffalo, he said, are the animals that look at you like you owe them money.

Can we airdrop a couple into the midst of the next BLM/Antifa peaceful protest? Pretty please?

If only I could grant that wish. I'd chip into a GoFundMe for that worthy cause.

I don't know, it looks like the croc is saying "weeeeeee, I've always wanted to fly" at the joy of being flung into the air.

Park buffalo are not necessarily tame. I was once treated to a drive through Nairobi National Park (not a patch on other parks which I knew well). Our driver was perfectly happy to stop close to any other animals we wanted to photograph, but wouldn'y get closer than 100 yards to even a single solitary Cape Buff. Nor would I, I told him to be prepared to make a hasty exit. Then a couple of idiots not only stopped babout 20 yards in fron of him but got out of their car and walked closer! No, I don't know what happened to them - as soon as the Buff started to get twitchy and move toward them my driver put his foot down and we didn't look back. Much to the annoyance of my companions, who didn't believe what I told them and thought the driver was 'only an ignorant local' when he agreed with me.

Oh I'd gladly fork over next weeks paycheck to see a couple of those buffalo in a crowd of BLM rioters.

Once upon ago (55 years?) I read about a hunter in Africa, 1900 +/- ten years or so who, as an experiment, shot a (dead) cape buffalo in the head with a .45 Colt Peacemaker. So, 255 grains of soft lead over 40 grains of black powder. Shot it six times and pealed the flattened bullets off its skull with his fingers. Obviously, that story stuck with me though I don't swear that my memory is completely accurate to the original.

after watching this I should be more respecful of mad maxine waters and she jackson lee... didn't know that about buffs ;^D

PHC fired my imagination since the first snippet I read in AR back in the 70's.

That you knew him, however tangentially, is neat. Thank you for the reminder of that amazing man.

Saler and Longhorn are wild cows.
Bison and Buffalo are not.

Bison are even worse than Moose, and the Cape Buffalo is legendary.

Would I tangle with one in open terrain?
Yeah. I have lots of experience dodging pissed off wild cows, and like adrenaline a bit too much for my own good.
Would I go into a canebrake to meet one at close-quarters?
I don’t think there are enough expletives to pile in front of the “no”.

Not just buffalo. A neighbor's "domesticated" bull once got loose and attacked another neighbor up the road. They had to keep escalating guns before they could bring it down and it's nothing short of a miracle (plus years of farming making a tough old body) that the neighbor did not die from the bull's efforts.

Mankind would do well to remember that we are at the top of the food chain, and it was NOT an easy climb.