The numbers boggle the mind

Regular readers will recall that last year, I put up several articles about the collapse in freight shipping across the Pacific from Asia to America.  This year, the story has been all about the sudden, overwhelming reversal of that situation, to the point that costs have increased many times over and there's a desperate shortage of ships and containers to handle the demands of trade.  So bad has it become that Home Depot (the third biggest importer of goods into the USA) has chartered its own container ship, to handle its own imports rather than trust them to uncertain schedules and costs from shipping lines - something its competitors are doubtless wishing they'd thought to do themselves.

I've long focused on logistics as a bedrock of studying business, commerce and economic activity.  It's an ancient truism that in the military profession, amateurs study tactics, while professionals study logistics - as Napoleon famously put it, "an army marches on its stomach".  The same applies to the entire world economy.  The flow of goods is a bellwether for the health of economies.  If the former falters, it's an indication that the latter is getting sick, and vice versa.

In recent weeks I've been looking at the numbers concerning the cruise industry;  the mammoth floating hotels that take millions of holiday-makers to sea for a few days to a couple of weeks at a time.  I've never been on a cruise, and have no intention of going on one - why be locked aboard a floating prison along with thousands of others, with no easy way out if trouble strikes and a minimum-wage crew who aren't likely to put the passengers first if that happens?  I remember this happening off the South African coast while I still lived there, where the crew abandoned the passengers to their own devices and got away first.

No, thanks!  I want more control over my own environment and my own safety than I'd get aboard a cruise ship.  Nevertheless, millions of people clearly don't feel as I do, and - until COVID-19 came to the party - they kept hundreds of thousands of workers employed in that side of the tourism industry.  As such, it's a microcosm of the broader economy.

The economies of scale needed to make a profit on such a huge investment in ships are mind-boggling.  In 2018, just three companies - Carnival, Royal Caribbean and Norwegian - controlled 75% of cruise ship revenues (about $34.2 billion out of a total of $45.6 billion).  In 2020, before COVID-19 devastated the industry, here's how that broke down.

On average, tickets account for 62% of total revenue and onboard purchases make up the remaining 38%.

Though tickets represent a majority of revenue, onboard purchases account for the lion’s share of the profit, according to several experts.

As a high fixed-cost business, a cruise ship relies on getting as many passengers as possible on the ship — even at fire-sale rates. The major cruise lines will often fill each ship to 105%-110% capacity, then upsell its captive consumers on additional services.

“They have mastered the ability to get their hands into people’s pockets and to take out every last dollar,” says Ross A. Klein, a professor at Memorial University of Newfoundland, who has closely studied the cruise ship industry. “They can almost give a cabin away for free and still make a profit.”

To make these figures a bit more relatable, here’s what this works out to on a per-passenger level for a 7-day cruise: 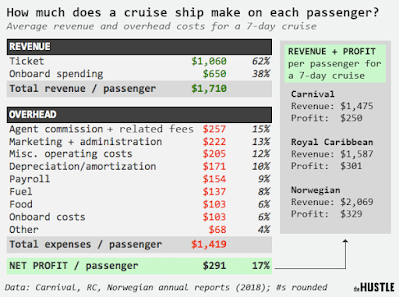 But then came COVID-19, and the cruise market evaporated almost overnight.  All those cruise ships, built and equipped at such vast expense, suddenly became floating holes in the sea into which cruise lines had to pour vast quantities of money (in terms of operating costs, overheads, etc.), without earning back any of it.  Inevitably, it became cheaper to scrap many of the older cruise ships, rather than see them continue to eat away at their owners' financial reserves.  The result was this.

That's a fascinating video to watch, to see just how much comes out of a cruise ship and is sold on the second-hand market.  It may not mean much to affluent consumers in a First World market like the USA, but it's literally the life-blood of many families in the places where the ships are scrapped and recycled.  Our pandemic economic catastrophe was their windfall.

That got a lot of financial monkeys off the cruise industry's back - but it still didn't bring in the income they were used to.  Hundreds of thousands of people lost their jobs aboard those ships, or in related industries like booking passengers, servicing and supplying the ships, feeder flights and hotel rooms for those joining and leaving the ships, and so on. Just that one industry probably knocked out half a million jobs in the USA alone, many of them lower-paid service jobs on which entry-level workers relied.  Those jobs haven't yet come back, and may not for another year or more.

Expand that to cover all the lower-paid jobs, across all industries and sectors of business, that were lost thanks to COVID-19 and the nationwide shutdown that followed, and you get some idea of the economic devastation involved.

The worst thing about it is, if current speculation is correct, this was all avoidable.  If COVID-19 turns out to be a man-made illness, produced in a laboratory for no good reason and then released, accidentally or deliberately, to affect world trade, who's responsible?  Do we blame the laboratory involved, and/or the scientists who "played God", and/or the country that hosted them, and/or the international funding (including from the US government!) that encouraged and paid for such research, or . . . or what?  It's human nature to want to blame someone, and in this case the available evidence certainly suggests there's enough blame to go around - but will anyone ever actually be held accountable?  Will we hold the Dr. Fauci's of this world accountable for their incomprehensibly bad advice, which they knew full well at the time was bad advice, that led to such economic catastrophe?  Will we blame the politicians who deliberately tried to make our economy worse, in order to blame it on their political opponents and thereby defeat them in elections?

We're looking at the consequences of what may have been the deliberate destruction of the livelihoods of millions.  Who will pay?  And how can we prevent it happening again?  The dismal answer is, we don't know, and we may never have an answer.  That's just depressing as hell.

Also remember that the crew is 100% non-American, excepting the people that actually run the ship.

I lost interest in the ship demolition video when she inserted the comment "or hurting the environment". I wonder if she understands why they do it in Turkey instead of in the US? It is cool though.

I wonder whether tearing ships apart is really much more dangerous than putting them together.

I was in the Navy so got paid to go on cruises, including one ten month cruise. Wonder how much the average cruise line would charge for that. My parents have been on several (not ten months) and thoroughly enjoyed themselves.

The full story of the Oceanos is that it was a 40 year old ship that had been repurposed as a cruise ship and wasn't maintained properly. They didn't finish repairs before they set out and they set out into a pretty severe storm. The good news was that every single passenger was rescued, so if you look at it that way, worst case scenario, no one died.

A lot of freight lines chose the Covidiocracy as a time to eliminate older non-max style ships, even getting rid of some Panamax sized ships (big enough to max out the old Panama locks) in favor of keeping their larger and newer ships going.

As to the Covidiocracy, did you see the news report where parents from Gainesville, FL sent in samples of their kids' masks? Even if Covid was aerially transmitted, the amount and variety of pathogens found on masks worn at school was found to be terrifyingly high.

Which we knew, mostly, after the early Flu Cruise situation.

It was all politics and theater, not science. We threw it all away as a nation and a world because... politics.

One ship, that's a joke not vertical integration of the supply chain. How much of the ship decommissioning was driven the IMO issuing fuel standards due to "climate change"?

Prior to working as a mate on a smaller Antarctic cruise ship (during the northern summer, so I didn't get to go south), I had to take a disaster management and maritime crowd control class at the best maritime school in the world for such things. The class can be boiled down to 'choose the loudest troublemaker and shoot him center mass twice.'
Oh, fun fact, the first female cruise ship captain was in that class with me. She was a 3rd voyage 3rd mate at the time, though. She got a little sextant tattoo on her foot midweek, I remember.
Although Biden STILL hasn't named a Maritime Administrator, the dept. of commerce FINALLY sent a scout to Port Newark Container Terminal this week to investigate claims that US companies are not getting their cargo placed on Far-East bound container ships in favor of empty containers being returned to China... which has been happening for months, but we maybe will officially notice it.

To answer Fredrick's question, it's unlikely. With demand for jet fuel still low, there's a lot of Middle Distillate Oils (diesel and dieselesque fuels) available to be mixed with heavy fuel oil to make low-sulfur fuel oil, VLSFO, the stuff that the green weenies forced on us. This keeps the price spread between RMG-380 (high sulfur fuel requiring a scrubber) and VLSFO under control, although this week's spike in prices is playing havoc with that, too, along with bunker fuel prices rising $8/ton/day lately in the US across the board.
Most cruise ships have exhaust gas scrubbers, I've heard over 70% now. Economies of scale have pushed scrubber prices down to $1-2 million. With tankers now approaching 50% scrubber-fitted, and container ships at 40%, demand for high-sulfur fuels has been steady. Shipowners are waiting for scheduled shipyard periods (every 5 years) to do the installs, so I presume that scrubber installations will continue for at least the next 2-3 years.
hope that helps.

Going to sea at all has an element of risk, just like flying. Look up the Estonia disaster sometime...a RO/RO ferry between Tallinn and Stockholm went down because, apparently, the for'ard thing that formed the prow got loose and fell off in fairly heavy seas, due to (they think) metal fatigue.