At last, a study of the entire Titanic wreck site


I've been frustrated for years to be able to see bits and pieces of the remains of the RMS Titanic, several miles deep beneath the Atlantic Ocean, but never to be able to understand the 'big picture' of where the pieces of the wreck lay in relation to each other, or where the scattered smaller items of debris lay in connection to the parts of the ship from which they'd come. According to the History Channel, that has now been remedied.

Two years ago, HISTORY took part alongside the world’s top underwater experts in the most recent expedition to the wreck site. The undertaking yielded unprecedented new discoveries and the first comprehensive map of Titanic’s watery grave, helping specialists solve the century-old puzzle of what went wrong — and determine who or what was responsible. A HISTORY special entitled “Titanic at 100: Mystery Solved”, set to premiere on April 15 at 8 p.m. ET, will document the mission, capture the high-tech mapmaking process, unveil astonishing pieces of never-before-seen wreckage and present the expedition’s unexpected findings.

... experts armed with sonar technology and high-resolution cameras mapped the debris field in its entirety, capturing 15 square miles of ocean floor littered with artifacts both large and small. Previous surveys had only comprised 60 percent of the area, leaving out significant pieces of the doomed ship and limiting conclusions about Titanic’s sinking to theories, conjecture and land-based studies. Together, the expedition’s participants generated a map that was not only more complete but also more precise than earlier attempts. “Over the course of time, there have been dozens of expeditions to Titanic, but notwithstanding all of the expertise and all of the technological advances, no one has even tried to accomplish creating a comprehensive site survey map of this wreck site,” said Chris Davino, president of RMS Titanic, Inc. “Previous expeditions have gone down in manned submersibles or photo sleds to cover an area of the wreck site,” Stephenson explained. “They would only cover a portion of the wreck site since they could only stay down for so long.” When experts fused together these disparate slices back on the surface, key information was lost — including the exact locations of artifacts and fragments. 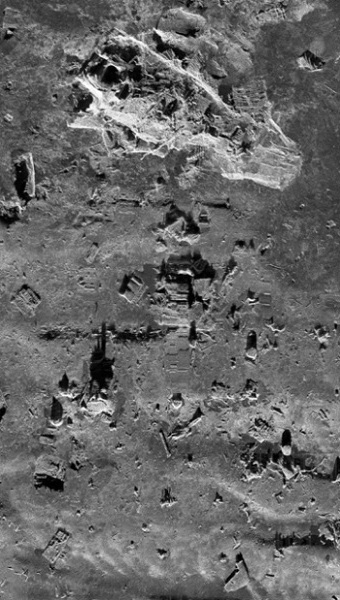 The team believes its cutting-edge approach represents a paradigm shift in underwater archaeology. “Speaking as an archeologist, I think it’s extremely exciting,” said James Delgado, director of maritime heritage for NOAA’s Office of National Marine Sanctuaries. “This technology and these AUVs are as much a game changer for this kind of work on the bottom as going from a landline to a Blackberry.”

We've looked at the progress made by modern digital side-scan sonar in a number of previous articles, so I'm not surprised that it's now been used to map the Titanic's debris field - in fact, I'm at a loss to explain why it's taken so long to arrange it! I don't subscribe to or watch cable TV, but I might have to ask a friend who does to record this show for me. It'll be fascinating to see what can be learned from an overall view of the Titanic's last resting-place. I'm sure marine archaeologists all over the world will be watching in fascination.