There's terrible news from Nevada. Fellow blogger 'Neptunus Lex', in real life retired US Navy Captain Carroll LeFon, was killed yesterday when his Kfir fighter crashed (shown below). At the time, he was engaged in an 'adversary' mission to train US military pilots. 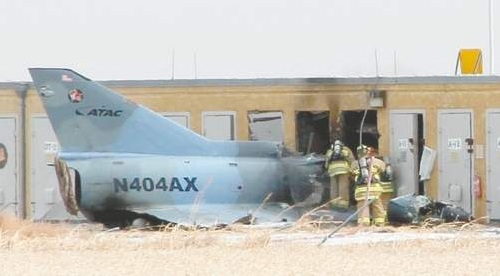 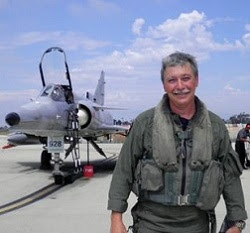 Carroll "Lex" LeFon is an retired US Navy captain, incipient crank, rapidly aging curmudgeon and used-to-be naval aviator with over 4000 hours in fighter aircraft, predominantly the FA-18C Hornet. His operational experience includes seven carrier deployments, including several in support of Operation Southern Watch, enforcing UN Sanctions in the Southern No-Fly Zone over Iraq. After commanding an operational FA-18 squadron he reported to the USS Constellation in 2001, later serving as her Operations Officer in the Arabian Gulf during Operation Iraqi Freedom. Shore tours include tours as instructor pilot in basic jet training, as an adversary instructor and as the Executive Officer of the Navy Fighter Weapons School (TOPGUN).

He retired from the Navy in 2008, after serving as Assistant Chief of Staff for Operations and Training on two flag staffs. He is a 1982 graduate from the US Naval Academy with a BS in Political Science, with a Master of Science in Systems Engineering Management from the US Naval Postgraduate School.

A condolence thread has been opened at 'Neptunus Lex' for those who wish to leave a comment. The US Naval Institute Blog also has at least two articles about his passing. I recommend all three links to your attention.

We've lost one of the 'best of the best'. My heartfelt condolences to his loved ones.

Labels: Accidents, Aircraft, In Memoriam, Other blogs, Tragedy
Email ThisBlogThis!Share to TwitterShare to FacebookShare to Pinterest

We've lost one of the 'best of the best'. My heartfelt condolences to his loved ones.

Amen, Peter. We are poorer today.

Oh, how sad. But, maybe he'll see my dad. Biene

I've been looking at the various blogs and I am moved at the emotion expressed in most of the tributes and notes of condolence. The good Captain truly touched many people,myself included.

Soar free Captain, and don't worry about your six anymore.

I'll Echo a last bit of what I posted on Lex's site:

...He was A Gentleman’s Gentleman, a FinestKind Officer, and the sort of man who could lead you to Hell in the sure and certain knowledge that he had the skill, moxie, guts, and, most of all, heart that you just KNEW he’d bring you back home again…

“Shack your targets, splash a couple of bandits, and catch yourself an OK-3 from Paddles when you get back…

Those of us who were part of the "Lexicon" greeted the morning of March 8, 2012 with great dismay. When I opened an email from a friend in Afghanistan with the news, I felt I'd been punched in the gut.

In this case it looks like Lex was not at fault, nor was the aircraft. It appears Ground Control Approach (GCA) screwed the pooch. This was the day the bear got GCA and Lex paid the bill.

I just got off the phone with an old F-4 driver from the days when Precision Approach Radars were still common as the "precision Approach" method used. In one situation in Europe he was on a let down and the controller had him in position and on glide slope. When He got out of the soup he found he was about half a mile to on side of the runway.

It appears soemthing similar happened with Lex. GCA apparently put him down on the taxiway parallel, and to the west of, the longest runway. The building in the picture above is the magazine storage building just north of the arming pad, which is in line with that taxiway. Had GCA put Lex on either of the two long runways, the aircraft may have been wrecked, but there were clear run out areas for at least a mile past the end of the pavement. That was not the case with the taxiway, as you can see from the pic.

Frankly, it is not a stretch to think that GCA screwed up here. The consensus seems to be that by the time Lex realized he was on the taxiway instead of the runway, it was too late. GCA had been having problems landing him long as the Kosher Lawn Dart had very high operating air speeds (landing at around 180 knots), and an engine with a great deal of latency, so added power came up relatively slowly (a characteristic of earlier turbines).

To make a long story short, it looks like the GCA controller killed Lex.

A bit about the pic above. It was in the Lahontan Valley Times and was taken about 90 minutes after the accident. The link to the paper is

The Lexicon is making some effort to stay together to hold onto what Lex has given us all. I met Lex last summer, and we had swapped a few emails, his first telling me had edited a post I made. It was obvious there was some concern that I might be offended. I scotched that quickly when I told him it was his blog and he could do anything he liked, including banning me because he didn't like how trimmed my eyebrows.

Good man that, and I hope he was ready to face the Lord. I'd like to spend a few years talking with him later.

Lex, was my OPSO at VF-45, and I was his controller. We also fenced saber together in the hallway of the squadron. He will be missed.