Memories of a mammoth aircraft


Older readers may remember the first thermonuclear-weapon-capable strategic bomber in the United States arsenal, the Convair B-36, the largest mass-produced piston-engined aircraft ever built. 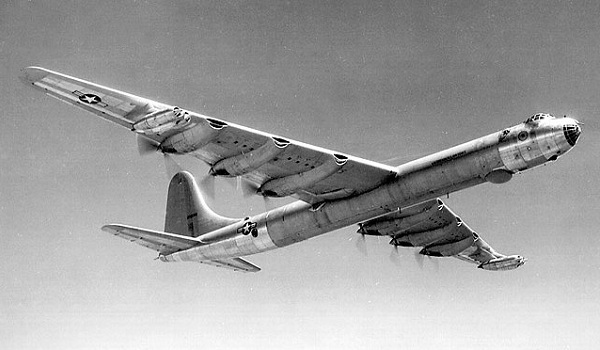 This huge aircraft could carry a greater weight of bombs than the all-up weight of an entire B-17 Flying Fortress bomber of World War II! It was always a challenge to fly, slow, lumbering and not very maneuverable. Its six piston engines (later augmented by four early-model turbojets) simply didn't have enough power to propel its fully-loaded weight of over 200 tons at a more sprightly pace. This led to its early replacement by all-jet-powered bombers (first the shorter-ranged Boeing B-47 Stratojet, and later the B-52 Stratofortress).

Despite its size and relatively low power, B-36 pilots (like their predecessors and successors in the US Air Force) sometimes pushed their aircraft to the limit. This was the case with a very low-level pass over a residential area of Fort Worth, Texas, in 1954. The Web site of the now-defunct 7th Bomb Wing B-36 Association Inc. tells the story.

Quite often, the B-36 would be called upon to demonstrate how quickly it could get off the ground, especially when loaded with a minimum amount of fuel. On a Sunday afternoon in October 1954 a group of firemen were having a convention in town and were on a tour of the Base. In order for a person to draw his flight pay he was required to fly at least fours a month, and 100 hours each year. Thad Neal's crew was scheduled for a two or three week leave in October, so in order to get in the required flying time this pilot proficiency mission was set up for the crew. I believe it was on a Sunday afternoon.

Before leaving home for the Base that morning, Thad called and told me to have Rin (my wife) standing by with the movie camera. I knew he had visitors and that he wanted them to get a good look at the plane, so I expected that it would be a low flyover but had no idea just how low he planned on making it.

The visiting firemen were on the ramp at the time of our take off so Thad was directed to make a maximum performance takeoff and then come around with the low pass over. With a minimum fuel load the B-36 really got off the ground in a hurry. We taxied onto the runway heading south and set the brakes. Thad called for full power on the six recips and four jet engines. That old bird started to stutter and seemed to skid until the brakes were released. I don't think we used a thousand feet of runway before breaking ground. We leveled off at four thousand and headed to the north end of Eagle Mountain Lake at 4,000' before turning south and heading for the north end of the runway. When over Eagle Mountain Lake the plane turned south. With "six turning and four burning" the plane headed directly for the north end of the runway. In a shallow dive with full power the plane skimmed down the runway at almost no altitude. I don't know how fast we were going but it had to be at least 180 mph. Thad kept right on the deck for the whole length of the runway. I was sitting in the glass nose and had a good view. The operators in the GCA shack along side the runway took a dive for the ground as the plane approached with the props almost ticking the concrete.

Thad had originally planned on flying directly over his house. Between the Base and West Ridglea the ground rises maybe a hundred feet so. Thad could not get a true bead on his house from the low altitude so he flew down the road where Ridgmar Mall sits today. Climbing over the small ridge he soon spotted his house just a wee bit off to the left. Still following the terrain he pushed the nose down a bit again but did not dare to drop the wing in a turn. After crossing he ridge, the land gradually gets lower until it reaches Mary's Creek. We stayed on the deck all the way and then part way down highway 377. Then we climbed back to altitude and my log book show we flew for six hours.

Trinka was in her front yard filming the approach, until frightened, when she dropped the camera. Rin had heard us takeoff so she got our camera and sat on the back porch to wait for the next event. It came so fast and caught her by surprise so that all she could do was step off the porch and shoot between the two houses. She did get a short blip of film as we passed about a block away. She did run out front and got a few feet as we few down the hill to the Creek, then she went in the house and poured herself a stiff drink.

As we flew down the highway I recall seeing cars stop and people head for the ditches. Several years later I was telling this story to some co-workers at General Dynamics and one man told me that he was one of those that had sought shelter in a ditch.

We landed and went home to prepare for our vacation not realizing the furor that was going on in Headquarters. One man had called in demanding that his TV antenna be returned. He claimed that a jet pod had removed it from his roof. One character even claimed that the jet exhaust had set fire to a phone pole. There were claims about cracked plaster and pictures that had fallen from the walls.

There was such a fuss raised that General Jack Ryan the 19thAD CO had to take some action. Early the following morning before we could get away, Thad called and said not to leave. General Ryan wanted to talk with all of us. We met at his office and one by one had to go in to give our version of the whole episode. When it was all over he had to fine Thad. I believe it was for $250.00 and he was taken off the promotion list for a couple of years, but as he left the General's office, General Ryan told Thad that was the best buzz job he had ever heard of. It didn't hurt his career either. He would serve as a Commander at Wichita Falls, and then in the Pentagon before going to Florida. He retired as a Lieutenant Colonel.

Thad was killed in a crash in the early 60's while training in C-123's in Florida. The training was preparing him for duty in Viet Nam, defoliation, I think they called it. In the middle of a low altitude turn he lost an engine and went down.

Sounds like a number of military pilots I've known! Here's a film of the low pass. I can see why those living there objected!

The same Web site provides a photo gallery, offering pictures of the mammoth B-36's as they went about their lawful occasions. Here's one after an 'interesting' landing in England. 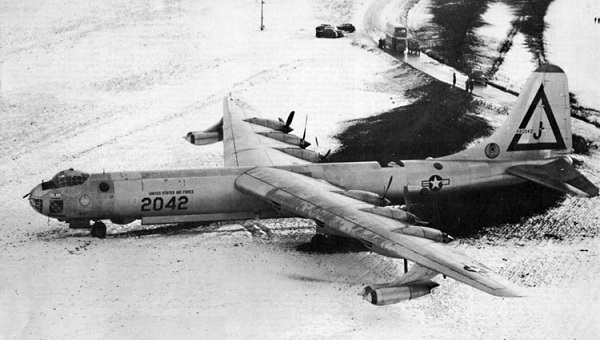 The incident is described as follows:

In January 1952, Jim Conner and crew were heading for Boscombe Down near Salisbury, England. The area was covered by a snowstorm and there was no radar or other sophisticated approach system with landing lights. The spire on Salisbury Cathedral had recently been rebuilt and aircraft warning lights installed. After orbiting this light for some time, Conner saw what he thought were approach lights for the field, and he started a descent. Unfortunately, those were not approach lights but were lights on one side of a funnel lighting system. (The theory was that if a pilot picked up one of these strings of lights and flew on the inside, he would soon see the other line and this would guide him to the end of the runway.) The landing appeared to be routine until touchdown when they went through a ditch, across a road and through another ditch, scattering haystacks as they rolled along.

Art Fisher was one of the scanners and remained at his station in order to shine a lamp on the number four propeller so that people would not walk into it. This engine had been kept running so that electrical power would be available on the plane. People were milling around in the dark, and could easily walk into the spinning blades.

A story is that an Englishman came up to the crew. He welcomed them to England and, pointing off into the distance, told them the airport was about a quarter-mile straight ahead. Then, with typical English dignity, he tipped his hat and strolled away.

Pierced Steel Planking (PSP) was put into place, the plane was towed to a hanger, washed down and flown back to Carswell by Walter Chambers about a week after the other planes returned.

An amazing aircraft, and very sad that only a handful were saved from the scrapyard.

What a gorgeous flying machine! This then, is a tribute. Thank you. :)

I remember playing in the sandbox outside our home in central Wisconsin around 1957. It was a sunny weekday morning when suddenly I found myself briefly in a shadow and the roar of a multi-engine aircrafty filled the air. I looked up to see a B-36 pass overhead at relatively low altitude. (But nothing like the low pass in the film here.) A great plane and sadly the only time I ever saw one in flight.

In 1950 I was living in White Settlement, which was adjacent to Carswell AFB. Our house was near the center of the B36 flight pattern. On takeoff, the B36 was low enough that the antenna wire from the tail to the cockpit was clearly visible. That was a thrill for a 14 year old kid.