I don't ever want to meet one of these!


Looks like Indonesia has another world record of which to boast. The Daily Mail reports:

A new species of wasp discovered on the Indonesian island Sulawesi is two-and-a-half inches long, and has jaws so vast that its discoverer admits, 'I don't know how it can walk.'

Lynn Kimsey, professor of entomology at the University of California, Davis, says ‘Its jaws are so large that they wrap up either side of the head when closed. When the jaws are open they are actually longer than the male’s front legs.' 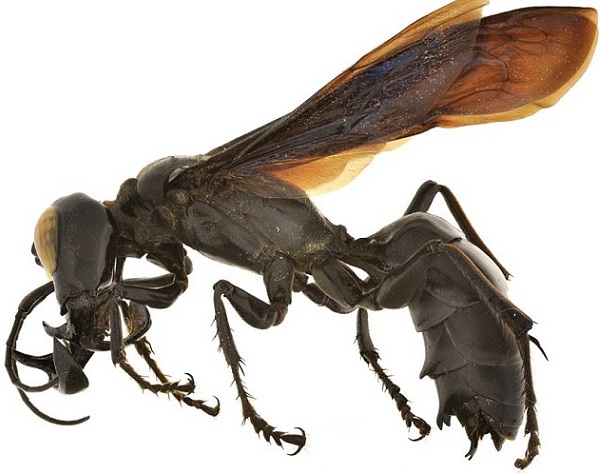 Kimsey discovered the warrior wasp on the Mekongga Mountains in southeastern Sulawesi.

She says its enormous size and ferocity makes it like 'the Komodo Dragon of wasps'.

'The large jaws probably play a role in defense and reproduction,' she said.

‘In another species in the genus the males hang out in the nest entrance. This serves to protect the nest from parasites and nest robbing, and for this he exacts payment from the female by mating with her every time she returns to the nest. So it's a way of guaranteeing paternity. Additionally, the jaws are big enough to wrap around the female's thorax and hold her during mating.’

It's an interesting discovery, all right . . . but I somehow don't think that particular mating technique is likely to catch on with our species! I'm trying to imagine how it would feel to have jaws bigger than my arms. No, thank you!

Excuse me while I scream and run like a little baby. A bug the size of a mouse really does beg the question, "What gauge for wasp?"

Deathly allergic to wasp stings. Thanks, Peter, now I won't be able to sleep tonight.

And now I know what those things in my nightmares were last night. Thanks a bunch.

I'm with JC. And that wasp has just added another reason why I will never visit the tropics of my own free will!