In previous articles about our economic situation, I've pointed out that the USA relies heavily on overseas investors to buy its Treasury securities, thereby funding US government borrowing (which currently pays for almost half of every dollar the Federal government spends). However, the clearest evidence yet that such investors will be much harder to find comes from China. As Zero Hedge reported recently: 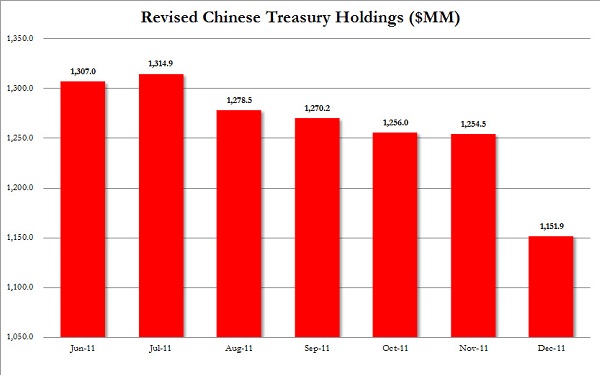 Best advice: keep a track of that Chinese trade surplus. If it becomes a deficit (just like Japan did recently), that is the first signal that things are changing dramatically from an international flow of funds perspective. It also means that unless the US finds subtitute demand, most likely from within, the only remaining buyer will be the entity that already has the largest holding of US paper - the Federal Reserve.

Well, it turns out that the money China had been investing in US securities, plus the proceeds from the sale of part of its existing holdings in US securities, plus even more money, is now being spent elsewhere. China's been investing in building up its reserves, particularly of crude oil, but also of other strategic commodities (including stockpiling many minerals for which it dominates world production). In doing so, it has indeed developed a trade deficit. Zero Hedge again:

[China's] February imports of $146 billion not only did not drop, but posted a 19% increase compared to January, and soared 40% compared to a year prior. Why? Perhaps the second consecutive record high in monthly crude imports has something to do with it. Which in turn when considering the huge selloff of US Treasury paper by China in the last few months, indicates that the world's fastest growing economy no longer has an interest in taking its export dollars and using them to fund purchases of US paper, but is in fact converting US fiat into real, hard goods. Such as crude (for all those curious where the marginal demand is coming from that is). And most likely gold.

The challenges currently confronting China are bound to spill over in the international arena. Niall Ferguson has just produced a three-part TV program dealing with the issue. The Telegraph reports:

In Western eyes, Chairman Mao is strongly associated with the chaos of the Cultural Revolution, but for many Chinese, he is the father of a modern, booming nation.

“There is an enthusiastic embrace of the economic benefits of the market but resentment of Western cultural hegemony,” says Ferguson, professor of history at Harvard’s Center for European Studies. “The attitude is: if we make it economically, we don’t have to kowtow to you culturally.”

Ferguson expects the Chinese leadership to channel this nationalism to shore itself up and deal with the tensions that are erupting as the output of its super-charged economy surpasses the US – a milestone that may be reached as early as 2016.

The challenges are formidable and echo some that the West has also experienced – a spectacular property boom that is already showing signs of turning into a bubble; factories with miserable wages and shocking working conditions; an ageing population; and pollution (16 of the world’s 20 dirtiest cities are in China).

The big contradiction seems to be that a fifth of humanity is living under a communist one-party state within a free-wheeling capitalist economy – a conflict that, on the basis of history, should tear the country apart.

“The spectre of turmoil terrifies the leadership,” says Ferguson. “They face the challenge of managing a dynamic society and that is a real problem with real tensions. But I don’t buy the idea that China is about to implode or disintegrate.”

Harnessing the resurgent nationalism is part of the strategy to contain this threat. So is a policy of economic expansion overseas.

Why does this matter for the rest of the world? For one thing, Ferguson sees unnerving echoes in that mixture of shrill nationalism and overseas ambition of Germany a century ago.

China is already devouring two-fifths of the world’s coal, zinc, aluminium and copper. Now it is turning its attention to foreign territory for those basic natural resources. In Zambia, after Ferguson descends a Chinese-run copper mine, he muses: “Maybe this is the beginning of a world empire.”

“Will China be our geopolitical nemesis or economic saviour?” asks Ferguson. With $2 trillion in international reserves, China is the West’s biggest creditor and owns huge chunks of US debt – something of an obsession on the presidential campaign trail this year.

Beijing has also helped bail out the euro during its recent travails. If President Sarkozy loses his re-election bid in France, robbing German Chancellor Angela Merkel of her chief ally in efforts to prop up the shared currency, the eurozone will doubtless come under renewed stress. And China may have to step in again, however reluctantly.

Western policy on handling the rise of China is all over the place, he believes. “For the US, the options range from conflict to containment to co-evolution to capitulation. The trouble with the current administration is that it pursues a different policy each day.”

The co-evolution strategy, based on the acceptance of shared interests, is his preferred choice. It also happens to be the theory outlined for relations between China and the West by Henry Kissinger, the former secretary of state and master practitioner of diplomatic realpolitik, whose authorised biography is Ferguson’s current project.

No matter what its own future may be, China clearly doesn't have any spare cash right now to buy any more US Treasuries. Neither do most European investors, particularly since they're skittish over current developments in Greece and the Eurozone. That means the Fed is just about the only avenue left for mass purchases of US bonds . . . it's 'printing money', creating it out of thin air, to satisfy the spendthriftiness of US politicians.

This cannot go on indefinitely. Sooner or later, probably sooner, the bill will come due. It'll either be paid through systemic inflation that will beggar us and destroy the value of the dollar, or by way of a massive cutback of government spending, including funding for the 'entitlement programs' that are presently supporting something like half the US population. Either option (but particularly the second) is likely to lead to mass social disruption and unrest, as those who've grown accustomed to 'sucking on the government teat' find their appetite suddenly unassuaged. In the ensuing chaos, we may find that China is the least of our worries . . .