I've just come across a 2012 report that the body of a long-missing pilot had been found in Egypt.  It may be a few years old, but it's still of interest.

THE body of a World War Two fighter pilot shot down 70 years ago has finally been discovered in the Egyptian desert, his family believe.

The Pryor-Bennett family are praying that DNA tests confirm that the remains are those of Flight Sergeant Denis Copping.

The young pilot has been missing for 70 years after he failed to return to base in his Curtiss Kittyhawk fighter in 1942. 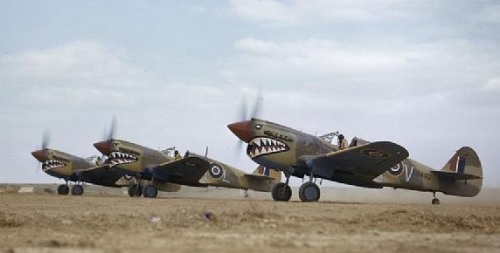 It was initially believed that the young man was shot down by the Luftwaffe near the Egypt-Libya border -- but experts later guessed that the RAF pilot got lost in a sandstorm over the featureless desert before running out of fuel and crashing.

They confirmed that the pilot survived the crash because they found his parachute but no remains.

They concluded that he must have set out on foot across the baking desert to try to reach the safety of Allied lines.

Flt Sgt Copping's nephew William Pryor-Bennett (62), was determined that his uncle's remains should be found -- and his son John (30) was prepared to travel to Egypt to help with the search.

But the Pryor-Bennetts -- who run the successful Mother Hubbards Cafe in Kinsale -- were astounded to receive word that Italian military historians have already found what they believe could be the young pilot's remains.

The discovery was made just over a fortnight ago.

"They heard about the discovery of my uncle's plane and decided to search the area around it. They have been doing a lot of research on the Italian soldiers that fought alongside Rommel," William Pryor-Bennett told the Irish Independent.

The Italians searched the area around the crash fighter plane -- and came across human remains just five miles from the Curtiss.

I understand the aircraft is to be brought back to Britain and restored for display in a military museum.  It's said to be in remarkably good condition, considering that it's been lying in the desert, exposed to the elements, for 70 years.  Click the image below for a larger view. 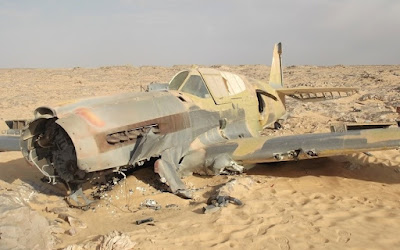 My father served in the RAF during the Desert War, and given what I remember of his postings he'll probably have been familiar with that general area.

May Flight Sergeant Denis Copping, and all those who died in that long-ago war, rest in peace.

That is good news, at least the family now has some closure...