Last year I put up half a dozen posts concerning the upgrading and refurbishing of AR-15 rifles.  In #6 of that series I talked about sights, including red dot sights.  I mentioned that the most 'value-for-money' optic in the Aimpoint series was at that time its Patrol Rifle Optic, or PRO, shown below. 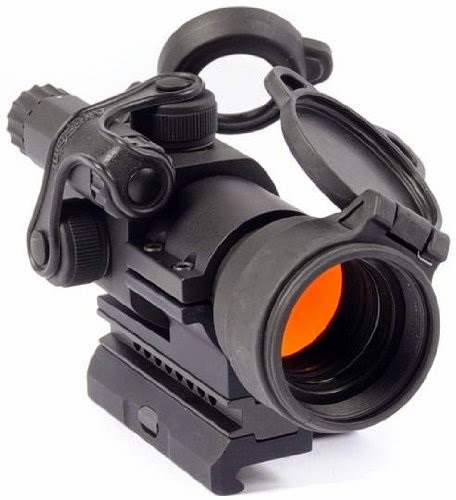 Now comes proof of the PRO's toughness under extreme conditions.

Paul Riddell ... lost his Minnesota home to a fire one night this past February.

Aside from all his family’s other possessions, he lost three firearms in the blaze. But, he reports his Aimpoint PRO mounted on a Spikes lower/BCM-EAG lightweight upper frankenrifle somehow survived the fire. That’s it in the inset photo of his rifle above, red dot glowing defiantly. Aimpoint found out about it and already swapped it for a brand new optic and with a plan to display the survivor in its museum.

“Here’s a picture of my AR after it was recovered from my house fire after being exposed to the elements for over a month in late February to mid March,” said Riddell. “The rifle was at the core of the fire.”

He said the rifle sat in the water and ice leftover from the firefighters, exposed to the outside in sub zero Wisconsin winter. Weeks later, Riddell was allowed to look through the wreckage after the fire investigation was complete. He found his melted pile of a rifle covered in ice, rust, ash and mud in the debris. The polymer rifle case it was stored in had fused to sections of the rifle, as well. He pried open the eyepiece cover on the PRO and turned the knob. And, it lit up.

“Had I been willing to trust firing the gun,” said Riddell, ” I wouldn’t be a bit surprised if it held zero.”


There's more at the link, including a picture of the damaged rifle and sight.

Kudos to Aimpoint for replacing the fire-damaged sight with a new one - but they'll get their money's worth out of it as an example to potential customers of how tough their products are.  Makes me glad I recently bought a PRO to put on my 'fighting rifle'.

That's why I have two Aimpoints (CompM4 and Micro T-1, the PRO didn't exist when I bought those)... not only are they great quality with incredible battery life, but they accept a beating that would render most other optics thoroughly destroyed. If something took out my Aimpoint, the rifle it was on is probably gone too. That's good enough for me.

I bought a Micro T1 for the same reason...as part of their testing, they threw the T1-equipped rifle out of a helicopter. It turned out that the sight held zero; it was the barrel that was bent.