The Battle of Berlin, 70 years later


This year is the 70th anniversary of the end of World War II in 1945.  The climactic European battle of that war was the Soviet fight to take Berlin, capital of Nazi Germany, in April and May of that year.

The Big Picture, a publication of the Boston Globe, has provided a fascinating series of photographs of scenes from the battle, juxtaposed with the same location photographed from almost the same position 70 years later.  The contrast between utter destruction and modern prosperity is jarring.  Here's just one of them to whet your appetite.  Click the image for a larger view. 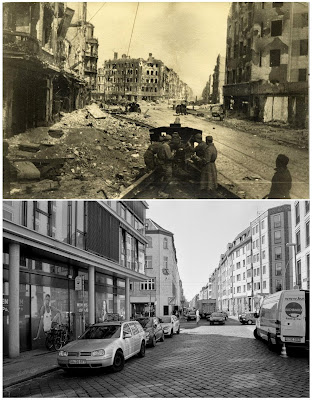 There are many more images at the link.  They make fascinating viewing.

It's humbling to think of those who survived all that, then went on to rebuild their countries and establish the prosperity that we take for granted today.