I'm trying hard to keep to my self-imposed deadline of having 'Forge A New Blade', Volume 2 of the Laredo War trilogy, published next Monday, May 18th. 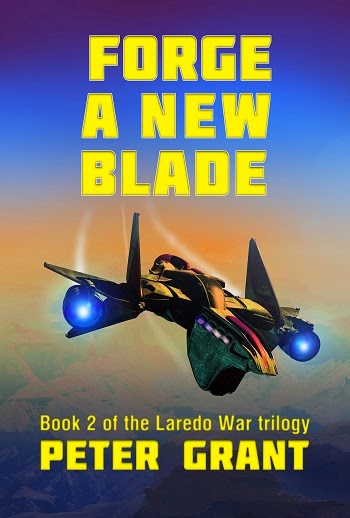 It's going to be tight - I lost a week due to ill-health - but I think I can have the e-book ready for Monday, which will be three months to the day since my previous book came out.  The print edition will probably take a couple of days longer, as there are more formatting issues involved, but I'm hoping to have it out by Wednesday or Thursday.

Thanks for your patience and encouragement to keep hard at it.  This will be my second book launch of the year, with two more expected (God willing) by November.  This one's also fun because it's a 'crossover' book - Steve Maxwell, whom we left about to take command of a communications vessel at the end of 'Stand Against The Storm', published in February this year, makes two appearances and contributes quite a lot to the development of the story.  If this works, and you like it, I hope to do similar, shorter series in future, where the character arcs can intersect and help develop both series.

Keep your fingers crossed for sales success with this one!  I'm deliberately keeping the price at my present $3.99 level, rather than increase it to $4.99 or more as Amazon's model has recommended.  I think it's more important to make it more accessible to more people.  Whether or not that continues depends on the state of the market (and my pocketbook), but I don't want my books to become too expensive to be easily affordable.  Thanks to your support, so far, I've been able to do that.

Labels: Books, Business and Commerce, Me me me, Thank You, Writing
Email ThisBlogThis!Share to TwitterShare to FacebookShare to Pinterest

Mr. Grant, 3 months in between quality novels is nothing to sneer at. And so long as I have an income (it doesn't even have to be a steady one) I'll continue buying your books, no matter how much you charge for them.

Your health is most important!! We can wait a bit longer if needed...


One question, as I am just now catching up on blogs- I would be most curious on your opinion of how you think the escalating racial/police tensions might play out here in the U.S. Over the next few years (in light of your time in SA). If you have already discussed this in a blog post, I ask forgiveness for missing it...

Yay! I very much enjoyed War to the Knife. Cheers.

LOVE the Maxwell series. A thoroughly entertaining adventure. I don't have the extra cash this moth to get the new series, but hope to at some point this summer. Thanks so much for sharing your rare gift!!

We can wait until you're ready in all regards with the release. It's on my "must buy" list.