The US Navy's experimental electromagnetic railgun is well known by now.  There's a new round for it known as the Hyper Velocity Projectile.  You can read about it here, and see it being tested in the second half of the video clip below.  It's guided, and zips along at 5,600 mph (or over 8,200 feet per second - almost three times as fast as a typical M16 rifle round).

Here's a photograph of the damage done to a steel plate by the Hyper Velocity Projectile (one of which is being held by the man on the left) during testing. 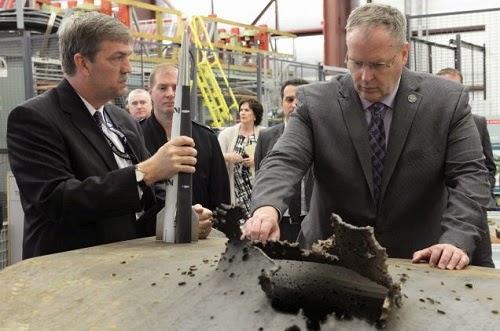 Makes it look a bit fragile, doesn't it?

It's not a very thick steel plate.

Looking at the article, a few things stick out to me.

The authors seem to have an impressive confidence in the sharply limited amounts of explosive a shell that shape could carry.

Networked artillery shells seem like a disaster waiting to happen - the enemy gets ahold of your codes or does a little hacking, and suddenly not only is their artillery landing on you but yours is as well.

Yeh...Well.. I love a good military propaganda story as much as the next rube, BUT; until the "G" finds that secret unobtainium mine and comes up with a thermal ablation resistant projectile, that fancy lawn dart will still have a 200 meter MAX range before the projectile melts. Rail guns only work outside the atmosphere or if they toss a NiFe projectile the size of a Buick. That's WHY we aren't using them on tanks. ---Ray

I must have missed where this has happened in the testing - care to link to an example?

Wonder how well that fancy lawn dart would work against the armor belt of the USS Missouri.....

and those projectiles traveling at 8K FPS will have a range of over 200 meters. At those speeds they simply won't have time to get hot enough to melt or deform in any significant way till they've covered a fair bit of distance. However air friction will slow them down quickly. I doubt the range on them will be very far and the effectiveness will depend on the armor thickness being attacked. HOWEVER.....in space these things would be wicked deadly.

Mike The projectile in the 122MM Main gun on the M1 MBT fires a Depleted Uranium penetrator because it is the ONLY material that can withstand the friction (HEAT) of the 5000FPS projectile velocity. At 8000+ FPS only certain ceramic coated materials can withstand the heat of atmospheric friction. Those ceramics are all VERY fragile (see the space shuttle break up) and completely unsuitable to weapons use. Its a great propaganda story, built to get the "Ruskies" to spend huge amounts to "catch up" and terrify the rubes. But without a major breakthrough in materials it cannot work as advertised. AND MIKE; Do you really believe that this, or any other military would tell us if they had developed an actual weapon that could kill a MBT at 20 miles with "line of sight" fire? Sorry but that "test" was propaganda , nothing more.--Ray

@Ray: I know someone working on that project. A great deal of information is classified, but it was he who pointed me to the report and video I cited in my article. According to him, "You ain't seen nothing yet." The advertised capabilities, according to him, are probably conservative compared to what the initial experimental results are showing them.

I'm willing to bet they wouldn't be spending this much time and money on the project (including sea-based testing next year) in an age of budgetary restrictions unless the project was on track to deliver what it promises.

Anon@0632: I suggest looking up the physical properties of a few metals. The melting point of uranium is a fair bit lower than that of iron, and far below that of tungsten; furthermore, uranium catches fire in air at quite a low temperature.
The reason for uranium projectiles is nothing to do with withstanding heat. The actual reason is a combination of high density and the way a uranium projectile reacts to impact: it fractures in such a way as to remain sharp, where most dense metals mushroom and thus limit penetration. That the fragments catch fire on the far side of the armor is a bonus.

"I'm willing to bet they wouldn't be spending this much time and money on the project (including sea-based testing next year) in an age of budgetary restrictions unless the project was on track to deliver what it promises."

OK you are all "true believers" but ask yourselves this; Since this "project" started as part of Pres. Raygun's star wars program (SDI) in 1982, and has already sucked up TRILLIONS of tax dollars, don't you think something would have come of it by now? IMO This is just another boondoggle to suck up the tax money. I know that nothing I think will change the mind of the true believing kool aid drinker. But for me, until I see it knock out a T-95 at 10 klick's I'll consider it B.S. Y'all enjoy that kool aid, I'm out---Ray

Considering that the star wars technology has in fact been proven(lasers and missles) - in spite of the opposition by demos and commies(BIRM) - I 'spect that this tech will also come to fruition.

In the long standing competition between armor and warhead, warhead always wins.

It's looking more and more like all this R&D is finally not only coming to fruition, but even getting pretty close to deployment. There's not many weapons a railgun can't replace- if you take the weapons load of a Burke or Ticonderoga class ship, this thing could replace pretty much everything but the Tomahawk (when fired at really distant targets). It can even do air defense roles- at those speeds you can hit even a speedy aircraft and you're doing it at a far lower per-shot cost. It's not just about knocking out tanks at range- it's about knocking out ships 50-100 miles out, it's about in-shore bombardment over the horizon. A tank would be a pretty easy target- use a drone to locate the thing thirty miles inland and BANG.

Yes, it's taken a lot of R&D to get to this point... that's what new technology requires. It took generations to go from flintlocks to discarding sabot rounds. It took years to go from unguided artillery rockets to MLRS systems with time on target barrages. It's outright foolish to write off new technologies just because it doesn't spring into being fully formed and capable.

One thing people are looking past...it doesn't have to fire at those velocities. If you want over the horizon plunging fire you can crank the speed down. The advantages are no powder charge, no barrel wear, and larger projectiles. The high velocity stuff will mostly be close in defense.

I think some of you are a bit confused about the abilities of a rail gun vs cannon.
The rail gun gets it's destructive ability from very high velocity, not explosive content. Over the horizon shots would be useless without a heavy/explosive warhead, as plunging fire has low velocity.
Line of sight, people.
Well, unless they develop it to toss shells like the Iowa's 16", but with much longer range.

I remember first seeing an example of this at the Naval Flight Museum in the late 1970's. Of course, it took another 20+ years of development to get something that didn't destroy itself in the process of firing. It hasn't that big of a budget, though (certainly not TRILLIONS(!!!), not even the entire SDI budget over last 30 years comes anywhere close to that total. Sheesh.)

I'm curious what the real-world rate of fire and power requirements are. This looks utterly useless for shore bombardment, and I have some doubts about how good a AAA mount this would be. At it's size, it'd be useless at close range, and just what would be it's useful range against a maneuvering target? Especially in the presence of jamming?