I need your help with a book cover, please


I've had some feedback from readers who don't like the cover of my latest book, 'Forge A New Blade'.  I've taken a look at their criticisms, and I can see their point.  The overall theme fits that of previous covers in the Maxwell series, but doesn't necessarily fit with the first volume of the Laredo War trilogy, 'War To The Knife', the cover of which which showed a battle in space.

I'm therefore looking at alternatives.  Here's the existing cover image, plus one I may use to replace it.  The latter also fits the plot of 'Forge A New Blade' in that it shows three cargo vessels in formation, which would correspond to the three converted merchantmen serving as Armed Merchant Cruisers in the book. 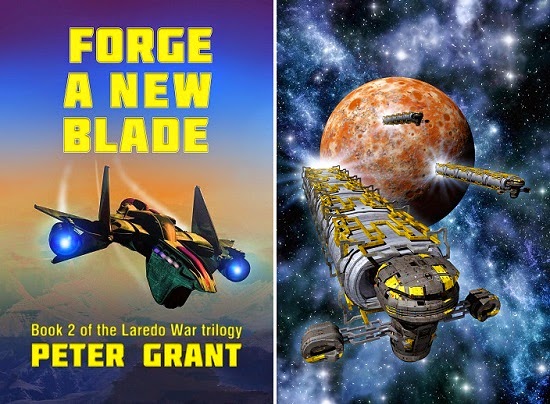 Here's where you come in, readers.  Looking at the two images, which do you prefer?  In particular, if you've already read the book, which fits it better?  Please leave your opinion in Comments.

(This is one of the real advantages of independent publishing. If a cover - or any other element - doesn't work, one can change it very quickly in response to feedback. Mainstream publishers don't have that luxury.)

Thanks very much for your help.

I did not like the cover, but since I was already into the series, I didn't care. I just want the book. My choice would be for the new cover.

I much prefer the second (new) cover. The first is cartoony, the second looks more gritty and more real.

Bought/read the books, opinion: the second one with the AMCs.

I almost wonder if taking the ship pictured on the original cover and duplicating it so there's two of them (say the two ships present in the third act) and placing those two ships in the scene pictured on the right would look cool.

If it's a simple vote, I think the new one looks better. I think the sky coloring on the the first cover ended feeling a bit cartoonish, but like Jeff I personally wasn't concerned about the book cover because I was excited about the story!! Of course, I also remember reading one of your blogs about book covers and how important they are because that's your first chance at grabbing a new reader and bringing them in to your world.

The new proposed cover better reflects the new book; but the necessary text (Title, author) added will again detract from the image as it is now. As Jeff Woods said, thought, for books delivered and consumed digitally, the cover is really pretty much inconsequential.

I prefer the second cover, mostly because of the ship depicted in the first. It doesn't feel "real" (as much as that word means in a scifi setting). Something's just not right with it, perhaps the perspective, perhaps the engine placement, perhaps a lot of things. The second cover works far better in my opinion.

This coming from someone who's spent the last year working on semi-realistic sci-fi ship designs along with not-so-realistic sci-fi ship designs, both aesthetics and functionality-wise. What I've learned is that realism isn't necessary, but forms a portion of what feels right, and what feels right is what you want to go with. For me, that's the second cover.

As far as fitting, I don't know the plot, but with the title being Forge a New Blade, I would imagine that a set of freighters is quite fitting.

The second cover for sure.

I believe the second cover is much better. The three ships shown not only fit the story, but it also works with the "exiles in space" theme of the Laredo story.

As art, I like the second cover. It strikes me as too busy for a book cover, once you add the title and other text. The current cover is too empty and shiny, IMHO, but then you know what my covers look like, so I'm probably not the best source for suggestions.

I like the second cover MUCH better as an illustration, but, like others, wonder HOW much better after all the verbage is added.

But didn't buy it for the cover!!

Like your work, and hope to see many, many more!!

1) How does option #2 (the trio of ships) work with title and author overlain?

2) You're already on your way to a "shuttle in flight = Peter Grant" marketing theme.

I bought the book because of the story. The original cover was to plain in my opinion but what was inside is what I paid for. Given my druthers I would go with the optional cover.

To those who feel that adding text to the new image will make it too "crowded": don't worry. By the time the borders have been expanded and the image edited, there'll be room for text and it won't be crowded. We've done this before with other images for other covers. It's all in the editing.

You don't have a war until you have something to fight over, and you don't get that until the freighters and colony ships arrive. I vote cover #2. I would not be surprised at all to see the name MAERSK emblazoned on the side of each one.

Given a choice of the two, I'd go with the second. The first looks weird. Colors/proportions are off, so it is hard to figure out what you are seeing. Don't like it at all. The book, however, IS good!

I like the new cover, although the two ships in the background look like wood screws or drill bits emerging from the moon.

Definitely the second one. It fits MUCH better.

Yep, definitely the second one.

Unlike the others, I prefer the first. If Carson hadn't procured ships, there would be no story. Fighting ships are beautiful, freighters are ugly.

I disagree, I think space freighters are really cool looking. They represent the real economy in action, the pent up stories of merchant adventures waiting to cross the galaxy in search of the next good deal.

I agree that the 2nd cover is better looking. But there does not seem to be enough negative space for the text. Unless there is more starfield above and below the top text will cover one ship and the lower text covers the Forward Detail.

I like the second illustration as art, but the first cover is more in line with the series(s) and from my perspective says "Maxwell Universe" or Peter Grant scifi.

Saw the first cover when you announced the book, and immediately reacted negatively to the cover. It just doesn't look good.