Here's one to send warbird enthusiasts into ecstasies


This is a bit like the Holy Grail legend as far as warbird enthusiasts are concerned.

Ken Scholz bought N5416V in 1973. How much was it flown? Good question. I have no photos of it running or in the air. It was stored outside for several years, then moved inside his hangar where it sat - rarely touched. Ken, regarded as a nice and approachable man, passed away in 2004 and then his wife Marlene in 2012. The P-51 along with an extra Packard-Rolls Merlin are up for auction. 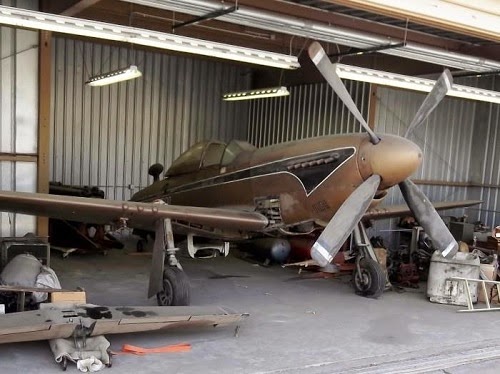 To participate, you will need a $25,000 deposit. The winner will have to be approved by the courts and have final money ready by June 9 2015. How much? That depends on the bidding war that might erupt trying to acquire a piece of history. Bidding is online June 2-4 2015.


There's more at the link.  Details of the auction (if you're interested) may be found here.

Here's a video of the plane in its present condition.

She'll need a lot of restoration, but to find an unrestored P-51D Mustang today in any shape or form is just about impossible.  I expect a huge amount of interest from the warbird community.  I wonder if Murphy's Law is counting his pennies already?

I am looking into a mortgage on the Lair and two German Shepherd dogs as we speak.

It will go way high. Wait until the guy who buys it goes bankrupt trying to service the debt, then buy it.

I never saw it, but a schoolmate and his father bought a P-51 around 1970, for the sum of $10k. I'm thinking that was a heck of an investment! IIRC, that was the going price for an average warbird at the time.