A car that helped the Allied war effort


I had to shake my head at a report in the Telegraph this morning.

Known by the Allied forces as their "secret weapon", the Czechoslovakian-manufactured Tatra 77a and 87 automobiles inadvertently became Nazi-killing machines. In fact, more high-ranking Nazi officers died driving these models of the Tatra – which had a top speed of 100 miles per hour but were rear-engined and heavy to handle – than in active combat.

Speaking at the Hay Festival on May 27, author Steve Cole said: "The Tatra 77a [and 87] was pretty sleek and pretty stylish. Hitler saw the car and believed it was the car of the future; it was the car he wanted to see people driving on Germany's roads." 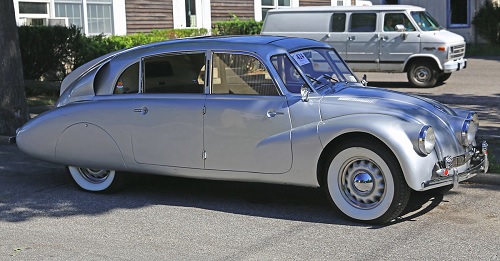 "Following the invasion of Czechoslovakia in the Thirties, it became very popular with high-ranking Nazi officers," said Cole, who last year released the Young Bond novel, Shoot to Kill. "They were all seen driving these things. The cars were designed to be very aerodynamic with the fin at the back and the wheel arches filled in order to stop the wind dragging.

"These high-ranking Nazi officers drove this car fast but unfortunately the handling was rubbish, so at a sharp turn they would lose control, spin out and wrap themselves round a tree killing the driver more often than not. The Allies referred to the Tatra cars as their secret weapon against the Nazis.

"More high-ranking Nazi officers were killed in car crashes in the Tatra 77 [and 87] than were killed in active combat. It goes to show that being too flash doesn't get you anywhere and will leave you dead."

I'm sure most of the subjugated Czechs would have been happy to know that . . .

I read years ago that, during the Vietnam war, most weeks more US soldiers were killed in traffic accidents than in combat (events like the Tet Offensive excluded), especially overturning jeeps. I also understand it affected the decision to move towards Hummer type designs.

Huh, I always thought that was a joke, now I find out it's real... Who knew? Obviously NOT me... sigh

I believe it was Corvette designer Zora Arkus-Duntov who informally assisted Porsche with taming rear engined cars back in the 50's- a process that continues.
Until then, hello lift throttle oversteer! You have a bastard nazi driving his Tatra towards a curve, and naturally he lifts up on the gas to begin downshifting. Next thing you know, the rear end becomes the front end, and off the road you go.