A very fitting recognition of a hero, 75 years later


I was touched to read about one aspect of the Royal Air Force's commemoration of the 75th anniversary of the Battle of Britain.

An RAF Typhoon fighter has been repainted in the Second World War colours of a Battle of Britain hero to mark the 75th anniversary of the crucial clash.

The Eurofighter jet which is usually coloured a drab grey has instead been painted with the camouflage and 249 Squadron identification number of the only Fighter Command pilot awarded a Victoria Cross during the battle.  (It's shown below alongside a WW2 vintage Hurricane fighter of the RAF's Battle of Britain Memorial Flight. Click the image for a larger view.) 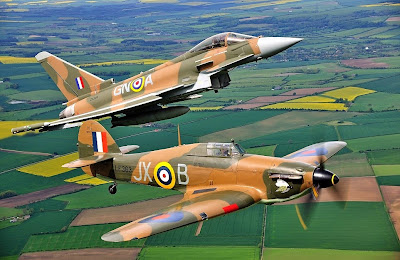 Flt Lt James Brindley Nicolson won Britain’s highest award for battlefield bravery for attacking and shooting down a German fighter even though his own cockpit was on fire.

The repainted Typhoon will fly alongside a WWII Spitfire at air shows across the UK this summer.

That's a fine paint job, and one that I think F/Lt. Nicholson would have appreciated.  Unfortunately he was killed near the end of the war, in 1945, in the crash of a B-24 Liberator bomber in the Bay of Bengal.  My late father would have recognized it, too.  He started the war as the equivalent of a Lance-Corporal in the RAF, and was commissioned as an engineer officer shortly after the Battle.  That color scheme would have been very much a part of his life at the time.

May F/Lt. Nicholson, and all those who died in the Battle of Britain, rest in peace.