Following the Baltimore riots, and the posts I've done on related defensive subjects over the past few days, I've had several queries asking me what firearms should be considered for defensive purposes when a family is involved.  There may be several people, all needing to use a firearm, covering each other, defending a vehicle or vehicles when traveling, that sort of thing.  The inquirers fell into two camps.  In some cases each individual already had a favorite firearm, but there wasn't much commonality in terms of caliber, magazines, etc.  In others the family were all relative novices, wanting advice on how to select firearms and get training.

I'm going to approach this from the second perspective, that of a family wanting to equip themselves for defensive purposes and starting with a relatively clean slate.  If you and your family are already trained and experienced in the use of firearms, you'll probably know enough about your needs that you won't need me to tell you about them.

All right. Let's begin with a few basics.


We'll proceed on the assumption that you're going to invest in handguns for yourself and your family.  Here are my suggested important considerations.  For considerably more detail, I highly recommend my friend and fellow blogger Kathy Jackson, a very experienced instructor with particular expertise in helping women get up to speed on shooting - something very important in the context of a family.  Her articles and blog are indispensable reading for me, and I recommend them to all my students.

First, even before you select your handguns, start training.  You can do this with BB or Airsoft copies of well-known handguns, which are freely available at very reasonable prices.  I've covered the subject in an earlier article, which I recommend you read before proceeding further with this one.

Second, remember that caliber, cartridge, etc. are not, repeat, NOT the primary consideration in the selection of firearms for the whole family.  You're looking for a basic common handgun that can be used by all the members of your family.  That allows you to maintain a common stock of ammunition, magazines, holsters and other accessories that everyone can use (and, more important, know how to use), and not have to worry about incompatible equipment or accessories.  Considerations include:


It's been my experience (in well over three decades of instructing shooters) that .38 Special in revolvers, and 9mm. Parabellum in semi-automatic pistols, are the biggest, most powerful cartridges that can be handled and controlled well by almost any shooter.  When you get bigger or more powerful than that, some shooters start to get very uncomfortable.  "Manly men" will doubtless claim that "Bigger is better", and "the only reason they carry a .45 is because nobody makes a .46".  Good luck to them.  Those slogans were accurate in the era before modern bullet technology became available, and are still somewhat valid when you're talking about hardball or full-metal-jacket bullets, but modern expanding bullets are pretty effective across most calibers and cartridges.  This image (taken from this excellent discussion of the topic, which I highly recommend) conveys the point very well. 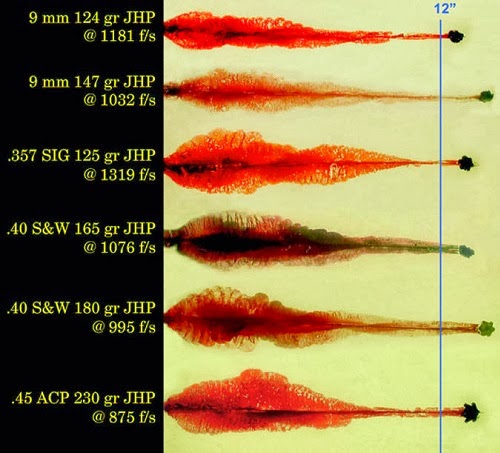 So, pick a firearm chambered for one of those cartridges that can be operated by anyone in the family and that fits everyone's hands (if necessary with different backstraps, for pistols offering that facility).  Standardize on it, and stock up on ammunition, magazines (at least 5 per pistol) or speedloaders (5 per revolver) and holsters.  Practice (and get training) until everyone's competent, and then stay that way.  Don't let your skills atrophy.

My personal recommendation?  It's the same I made a couple of months back - I recommend the Ruger SR9c pistol (and/or its big brothers, the SR9 or the new, lower-cost 9E, both of which use the same 17-round magazines as the SR9c, but can't use the latter's smaller 10-round version) as very cost-effective, reliable solutions.  (Shop around for those magazines - they're often available from online retailers for much less than Ruger's asking price.)  Their grips appear to fit most hands well, they've proved very reliable in my hands and those of my students, and there don't appear to be many problems with their controls and operation.  No, I'm not being paid or sponsored in any way to recommend them!  I've just had good experiences with them.

Once those fancy rounds have been used up, how do all of the different calibers compare with ball ammo?

I pray it doesn't, but fear some day it may happen... the world I live in may one day fall into lawlessness. I might have a couple boxes of ammo around, but I don't have a lot of these high performance expanding defensive loads on hand because they are expensive! Or are you implying I need to start stocking up on the expensive stuff?

My preference has been for the Circuit Judge. I am worried about penetrating a wall and getting one of my kids on the other side. Also in a tense situation accuracy falls. It is easy for my small framed wife to handle as well. a 12 gauge is just too much for her.

@Clinton Johnson: Yes, you do need to stock up on your defensive round of choice. I've written about this on several occasions. You can't rely on being able to get what you want whenever you want it.

Of course, if you're using a larger caliber, ball ammo can serve in a pinch: but then, can everyone in your household control the larger caliber?

The chart you've shown is not 100% of the story....But it is representative of wounds that will be encountered..

But having taught as a pistol instructor for the past 6 years, I have never yet seen a person (including children) who cannot handle a pistol in .45 ACP....Many prefer them over 9mm as the recoil is less "snappy"...more of a push. (Few like the ,40, but that gives you the worst of both worlds..

.45, .38 and 9mm are all very similar in energy that the shooter has to absorb. THere is very little difference. Big, heavy slow bullet, or lighter faster bullet....Especially when the weight of the pistols are taken into account.

I know a fair number of small women who prefer the push of a .45 over the snap of a 9mm or a .38. Most of the issue with beginners is fear ...they believe that the .45 is gonna be hard to shoot (no matter what the pistol platform) and therefore they are afraid.

1) Someone, I believe Massad Ayoob, said that 'pool guns', which would be multiple users and one gun such as a family pistol/ shotgun/ rifle need to be sized to the smallest user. 6'5" hubby with ham hands can shoot a CAR-15 and a Glock 19 but his 5'4" wife might have a hard time with a big ole Glock 20 and an FN-FAL.

I would say the same goes for a family looking to have multiple common platform weapons. One thing to consider is weapons that have common parts/ mags/ ammo but are available in different sized. The Mrs might prefer a short stocked CAR-15 and hubby might like a bigger AR with a full sized stock. She might like a Glock 26 and he might want a G17.

2)I largely ignore the caliber (presuming a reasonable choice) discussion since good ammo negates it. It is going to be a pretty unlikely situation where a normal family shoots 250+ rounds of defensive handgun ammo. Beyond that if they resort to ball that is OK. Ball ammo works decently but, especially in 9mm, the tolerance for bad shooting goes down. You will have to get decent hits to stop someone in a timely manner. Still since all handguns suck it doesn't matter that much. As a final thought on this matter. My friend H owns a bunch of older surplus handguns so testing them all for new JHP ammo is impractical so he carries ball ammo. Someone once said 9mm FMJ is like an ice pick to which he replied "If I stab someone 4-5 times in the chest with an ice pick it will do the job."

Commonality is a good thing, a really good thing.
Chances are you can get mags,ammo, parts for an 5.56 AR-15 and a Glock 9mm at pretty much every local gunshop.
Both are also fairly simple to work on.
And most importantly, there's a good chance that is what your friends, family, and neighbors have. If things are THAT bad, you really need to be teaming up with a lot of people.

Interestingly, I was involved in a similar exercise recently:

1. Handguns are "pieces of crap" that you use to fight your way to a rifle.
2. You can easily have a handgun with you all day, a rifle, not so much. Plan for that.
3. Commonality of equipment among a group is good; not just magazines and ammo, but also how the thing(s) work.
4. The only correct answer to the question "how much ammo/how many magazines do I need" is, to quote Tamara, "more."
5. Plan. Then practice the plan.
6. Your plan will fail. Have another as backup. Practice that one as well. Structure plans to have options.
7. Options should be Very, Very Simple.
8. Scenarios. Think 'em up, then practice them. Then practice them some more. Use blue guns for this, please.
9. Lone wolves don't last long; groups offer depth and skills overlap, but require more discussion, interaction and agreement. This will be a constant requiring regular work. Do not ignore it.
10. Groups - of any size or internal relationship(s) - require leadership. Do not confuse "managing" or "commanding" with "leading."
11. To quote Tuco Ramirez, "When you have to shoot, shoot, don't talk."
11b. Anything worth shooting is worth shooting several times.

I held a ruger SR9s the other day, and it had a nice short trigger pull, but I didn't get to shoot it. I like the SR9's, but I don't really understand the difference in this striker fired pistol. Is there something about it that would make it less safe or suitable to carry?

Also, all of the above models are standard striker-fired models. They all work basically the same way. They're perfectly safe to carry if used with a holster that fits them.

Interesting. We chose the SR-9C for our family. All four adults have one. We can all handle them comfortably and shoot accurately. We are able to share magazines and accessories. We are very confident with them.

Oh, sure, if they're taught correctly, and if they have no injuries or scars or insufficient wrist and hand strength that make the weight and recoil hard to handle...

But you don't see nearly as many youtube videos of women taking a chunk out of their forehead with the sights of a Ruger Mark III as you do with a Desert Eagle for a reason.

Thanks, Peter. I have been looking for an excuse to get a Ruger SR9E. Now I'll be in dutch with the wife after I claim, "But, Honey! It's for us!"